A young man tries to learn why his family left Spain for Australia in this picturesque drama with Edward James Olmos, Paz Vega and Carmen Maura. 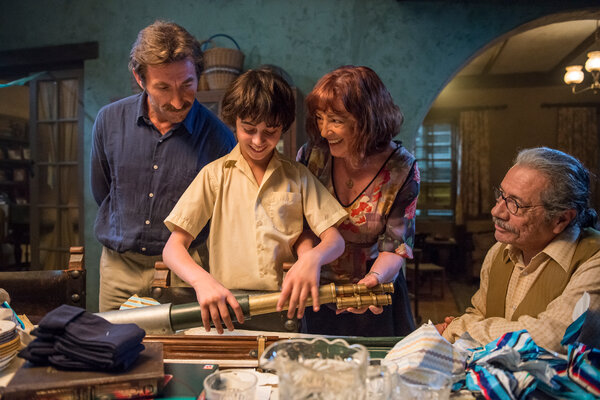 There’s a lot of beautiful scenery in “Chasing Wonders,” which stands to reason, as the movie was shot in winemaking regions of Europe and Australia. Directed by Paul Meins from a script by Judy Morris, the movie tells the story of a family of vintners who emigrated from Spain to Australia in the early part of this century, and of its youngest member, Savino, who as a teenager returns to Spain in search of answers about his past.

“Tells the story” is putting it generously, as it happens. In spite of its tidy running time, “Chasing Wonders” is diffuse and often limp. At a birthday party for a preteen Savino, the boy receives the gift of a telescope, and on the enigmatic instructions of his grandfather (played by Edward James Olmos, who also reads a platitude-packed narration) embarks with a friend to up to higher rocky terrain, the better to survey the night sky. This sets off his protective, stifling father (Antonio de la Torre), and a fractious family struggle ensues. This drawn-out fight is one in which you just know that the long-untouched bottle of wine from the old vineyard in Spain is going to be opened somehow.

Other members of the family include Paz Vega and Carmen Maura, both stalwarts of Spanish cinema, and they’re a pleasure to spend time with. (It’s also interesting that Savino as both boy and teenager is played by the same actor, Michael Crisafulli; the scenes in Spain were shot years after the Australian narrative was captured.)

The daytime landscapes — sprawling vineyards, blue skies, impressive rock formations — provide unalloyed visual contentment. Some of the night skies appear digitally over-enhanced, although if they’re not, more power to the cinematographer, Denson Baker. The movie’s human element ultimately serves up not much more than triteness.

Chasing Wonders
Not rated. Running time: 1 hour, 26 minutes. In English and in Spanish with subtitles. In theaters and available to rent or buy on Apple TV, FandangoNow and other streaming platforms and pay TV operators.