A year after Apple’s historic best-picture win, the lead categories could be filled entirely by big-screen films. But don’t call it a comeback just yet. 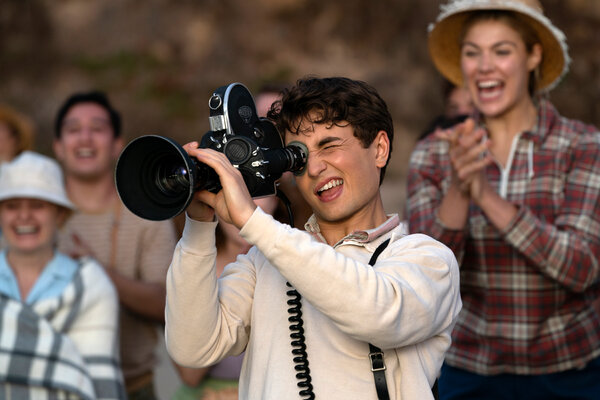 One of the last firewalls in film fell earlier this year, when Apple TV+ became the first streaming service to win the best picture Oscar for its heartwarmer “CODA.”

But next year, it’ll be an honor — and maybe even a long shot — for streamers just to be nominated.

Though Apple, Netflix and Amazon have become Oscar-season staples in just a few short years, regularly netting nominations in all the top categories, the new crop of contenders skews so heavily toward theatrically released features that an unthinkable reversal could be in the offing: It’s very possible that streamers won’t make this year’s best picture lineup at all.

In fact, the streamers’ most viable contenders come with so many caveats that they could be shut out of the top six categories — picture, director and the four acting races — almost entirely.

What are they up against? The field of best picture contenders is led by the multiverse-spanning hit “Everything Everywhere All at Once”; Steven Spielberg’s autobiographical drama, “The Fabelmans”; the Irish feuding-friends dramedy “The Banshees of Inisherin”; and the highbrow critics’ favorite “Tár,” starring Cate Blanchett. But there’s plenty more where those films came from.

Some of the likely nominees serve spectacle, like Baz Luhrmann’s biopic, “Elvis,” and the debauched old-Hollywood drama “Babylon,” while others boast big-budget adventure, like “Top Gun: Maverick,” “Black Panther: Wakanda Forever,” “The Woman King” and the forthcoming “Avatar: The Way of Water.” There is also a passel of issue-driven movies to consider — namely Sarah Polley’s “Women Talking,” the #MeToo drama “She Said” and “Till,” starring Danielle Deadwyler as the mother of Emmett Till — as well as “The Whale,” “The Inspection” and “Living,” three small dramas featuring best actor candidates Brendan Fraser, Jeremy Pope and Bill Nighy, respectively. And don’t forget acclaimed international films like “Decision to Leave,” “Triangle of Sadness” and “Close.”

Those are the movies that will, in all likelihood, claim not just the 10 slots for best picture, but also fill out most of the nominations in the directing category and all four acting races as well. It’s a long, eclectic list of theatrically released features, and this year, the streamers have only a handful of contenders to send into battle against them.

The Oscars aren’t until March, but the campaigns have begun. Kyle Buchanan is covering the films, personalities and events along the way.

Netflix initially expected its charge to be led by “Bardo,” from Alejandro G. Iñárritu, who won back-to-back best director Oscars for “Birdman” and “The Revenant.” But this navel-gazing, three-hour film about a Mexican director in crisis received high-profile pans during its debut at the Venice Film Festival, prompting Iñárritu to trim 22 minutes from his final cut. Though academy voters will probably relate to the film more than European critics did, that’s still a lot of baggage to overcome.

Two other Netflix movies have been more warmly received, but they face their own historical headwinds.

The Daniel Craig-led “Glass Onion: A Knives Out Mystery” is a riotous crowd-pleaser, but few sequels have ever managed a best picture nomination, and even the first “Knives Out” couldn’t snag anything more than an original-screenplay nod. Though “Glass Onion” is one of several sequels vying for Oscar attention this year, at least “Avatar: The Way of Water” and “Black Panther: Wakanda Forever” will follow first installments that were nominated for best picture.

Another top contender for Netflix is Guillermo del Toro’s stop-motion musical “Pinocchio,” which the streamer hopes to push into best picture consideration on the back of glowing reviews. Academy members clearly adore del Toro: They gave him the top Oscar for “The Shape of Water,” and even after last year’s “Nightmare Alley” was branded a costly flop, they still found room for it in the best picture lineup. Still, only three animated films have ever been nominated for best picture, and two decades after the academy introduced an Oscar category specifically to honor animated films, many voters appear to consider that laurel good enough.

Meanwhile, Apple is going from an Oscar winner that engendered good will to a contender whose Will is a major issue: The streamer will follow the affectionate “CODA” with the slavery drama “Emancipation,” even though its star, Will Smith, was barred from attending the Oscars for the next decade after slapping Chris Rock during the March telecast. Many pundits assumed that Apple would delay the release of “Emancipation,” directed by Antoine Fuqua, until next year in order to let the controversy settle, but the streamer has decided to make a go of it anyway, mounting an awkward press campaign in which Smith must spend more time apologizing for his Oscar slap than touting his new Oscar contender.

Even if “Emancipation” turns out to be a critical wowser, will academy members be eager to vote for a Will Smith star vehicle when his actions will still cast a long shadow over next year’s show? Smith may benefit from a particularly weak best actor field; though he can’t attend the Oscars, he can still receive a nomination. But most of the streamers’ acting candidates, which include Adam Sandler (“Hustle”), Jennifer Lawrence and Brian Tyree Henry (“Causeway”), and Janelle Monáe and Kate Hudson (“Glass Onion”), are considered to be on the bubble in their categories.

Should streaming films be completely shut out of the top six Oscar categories, many will call it a comeback for theatrical exhibition, and certainly, contenders like “Everything Everywhere All at Once,” “Elvis,” “Top Gun: Maverick” and “The Woman King” have all been big hits. But even if theatrical movies dominate this year’s best picture field, that victory will come with some complications.

Smaller, less spectacle-driven contenders have struggled to generate box office returns on par with prepandemic levels: “The Fabelmans” has earned a weak $3.6 million so far, while “Tár” and “The Banshees of Inisherin” haven’t cleared the $10 million mark domestically after weeks of release. Just a few years ago, those kinds of films would have at least doubled their current grosses. But the older audiences they rely on simply haven’t returned to theaters with any consistency.

If that sector doesn’t radically improve, specialty theaters will shutter, and the smaller dramas that need awards chatter to lure moviegoers will face no path forward but to debut on a streamer. Any Oscar comeback, then, is likely to be short-lived: Next year, it will be a miracle if we get even half as many movies like these debuting in theaters.

And that’s a shame, not simply because it would spell the end of a filmgoing habit that has persisted for decades, but also because streamers simply can’t match the “you gotta go see this” buzz that a theatrical release can provide. Even the most acclaimed streaming films on Netflix and Apple TV+ struggle to generate a level of conversation comparable to the multiseason shows on their services, while movies like “Tár” and “The Fabelmans,” though they may struggle financially, are among the year’s most talked about, specifically because you have to go to a theater and devote your time to them.

I was reminded of that a few weeks ago when I spoke with the actor Ke Huy Quan at an awards-season party for “Everything Everywhere.” He told me that the A24 film had finished shooting in 2020, a year when many studios cut their losses by selling films made for theaters to major streamers.

“Thank God A24 held onto the movie at a time when there was a lot of pressure to put it on streaming,” Quan said. “I was so nervous, I thought they were going to release it on Apple or Netflix.”

Instead, A24 waited to put “Everything Everywhere” into theaters this past March, and the film became a runaway success, grossing $103 million worldwide. The conversation about the movie has lingered for so long that Quan and “Everything Everywhere” are now seen as Oscar front-runners, an outcome that wouldn’t have been as certain without that incredible theatrical run to propel it.

“Had this been on streaming,” he told me, “we would not be here.”