With the help of her father, the documentary filmmaker Kirsten Johnson made a surprising, endearing movie about his death. 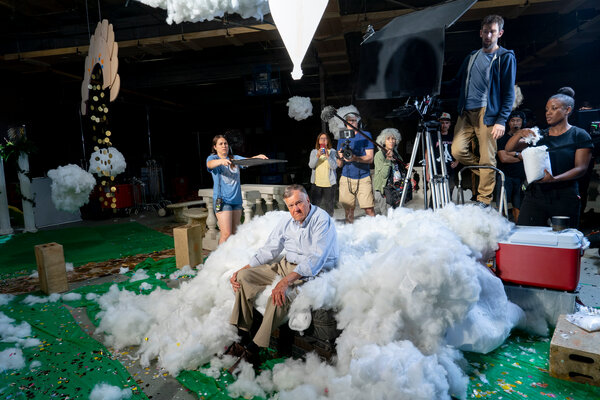 Critics like to pigeonhole movies using familiar categories — fiction, nonfiction, happy, sad — but one of the charms of “Dick Johnson Is Dead” is how slippery it is. Pitched artfully between the celebratory and the elegiac, it is an inarguably serious documentary with light, surrealistic flourishes that, at times, veer into exuberant goofiness. Even at its silliest, the movie retains an undertow of melancholia because (as the title announces) it’s a death notice. It is also a love letter from a daughter to a father who, for the viewer, becomes fully human even as he fades away.

The trouble started, the director Kirsten Johnson explains, with missed appointments and mistakes. Her father, Dick, a psychiatrist and widower who lived alone in Washington, started to slip up. And then he drove through a construction site and kept on going, making it home on four flat tires. His worried friends and colleagues alerted Johnson and her brother. “Every call,” she says in voice-over, “felt like an alarm bell.”

When the documentary opens, father and daughter have already come to an understanding. He will move into her New York apartment, and the two of them, rather more unusually, will make a movie about his dying, partly by enacting it. What made Dick sign on? He seems like a supremely loving, indulgent father, but when he agreed to make this movie did he fully grasp the situation? The possibility that he didn’t is both painful and ethically murky, which strengthens the movie’s complexity.

Kirsten doesn’t offer much of an answer other than “he said yes,” though the movie’s very existence, you come to understand, explains plenty. Not long after, an air-conditioner is falling out of a high window and landing on Dick, splat. Like the serially unlucky Wile E. Coyote, though, he is soon back on his feet and smiling into the next scene, the next fantasy. The Oedipal overtones are strong (and Dad is a shrink), but Johnson doesn’t put either of them on the couch (maybe because Dad is a shrink).

Further mock calamities befall Dick, who participates in a series of gruesome staged scenes with outward good cheer. Amid the theatrical catastrophes, Kirsten nudges the family’s story forward and occasionally back in time, rewinding just enough to sketch in some history. She pulls out old photos and moving images of her mother, who had Alzheimer’s and whose death Dick calls “a long goodbye,” piercing your heart. If Kirsten doesn’t spend a lot of time rooting around in the past it may be because both the present and fast-approaching future is so overwhelming. And, as Dick’s future comes into focus, it is clear that the family is bracing for another anguished goodbye.

This is the latest documentary feature from Kirsten Johnson, who made a splash a few years ago with her feature directorial debut “Cameraperson,” a self-portrait created from material she had shot all over the world, from Bosnia to Yemen, including for other people’s movies. For much of her career she has worked as a documentary cinematographer, shooting for filmmakers like Michael Moore and Laura Poitras. In “Cameraperson” you catch glimpses of Johnson’s parents, as well as her children, material that is appealing but eclipsed by the powerful images surrounding it, visuals that she only could have gleaned through long separations from her family.

For the most part, the tone and mood in “Dick Johnson” are light and buoyant (far more so than her first feature), which creates an interesting friction given what’s happening onscreen. Sometimes it feels as if both father and daughter are putting on a relatively chipper front for the benefit of each other or maybe for Kirsten’s children or for the audience. Every so often, though, there’s a shift in the weather during, say, during a visit to a doctor or a difficult family talk. Smiles fade, and voices catch. Some of the most emotionally expressive and tender moments simply show Dick sleeping, reminding you that the person behind the camera is also a daughter.

Why did Johnson put her father through this? Why did she put her family on display? This lack of clarity, like the issue of Dick’s agency, is never wholly resolved, which transforms a gimmick into something resonant and, in moments, profound.