Set in the early days of the Israeli-Palestinian conflict, this drama depicts the upheaval of Palestinian society from a 14-year-old girl’s perspective. 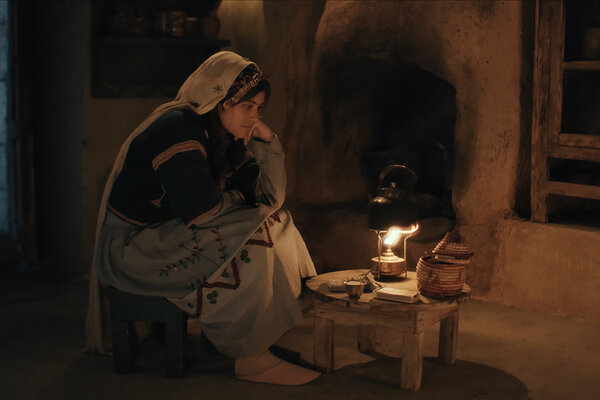 Set in 1948, the year that Israel declared independence, spurring a war that would result in the upheaval of Palestinian society, “Farha” depicts a relatively small-scale tragedy considering the scope of the violence. Yet the drama, which primarily unfolds in a tiny storage room, speaks volumes.

The film, by the Jordanian writer-director Darin J. Sallam, is a brutal kind of coming-of-age story. It follows Farha (Karam Taher), a plucky 14-year-old who chafes against gendered traditions. She petitions her father (Ashraf Barhom), the leader of their village, to let her go to school in the city with her best friend, Farida (Tala Gammoh). Dad eventually concedes, with nudges from a modern-minded relative, but Farha’s time on cloud nine is abruptly cut short.

Sallam doesn’t go out of her way to detail the politics fueling the moment — basic knowledge of what Palestinians refer to as the Nakba (Arabic for “catastrophe”) that impacted the region at the time should make it clear that the newly arrived soldiers are from the Israel Defense Forces.

From Farha’s teen-girl perspective, life is scowling at boys and daydreaming about urban adventures. So when the gunfire starts and the village descends into chaos, it’s all a blur. Not grasping the dangers, Farha impulsively jumps out of the family getaway vehicle, refusing to leave her father behind.

Almost immediately, Farha’s father throws her into a storage cellar and locks her in for her safety. She remains there for an indefinite amount of time, rummaging through the preserves, catching rainwater, peering out of a peephole. She finds a gun buried inside a sack of grains — was the threat present all along?

One day, a scene of great barbarity plays out before her tiny window, with the camera approximating Farha’s obstructed point of view. Most of the rest of the time, however, Sallam keeps the camera fixed on Farha’s face. Farha doesn’t do much besides wait, yet, by simply looking at this young girl, we witness a devastating transformation.

Farha
Not rated. In Arabic and Hebrew, with subtitles. Running time: 1 hour 32 minutes. Watch on Netflix.