The number of HBO Max subscribers jumped following Warner Bros.’ announcement that all 2021 movies would debut on the streaming service, new data shows

HBO Max’s big bet on new movie releases appears to be showing early signs of paying off, with nearly twice as many people adding subscriptions after it announced its full 2021 film slate would debut on the service, according to Hub Entertainment Research.

In November, 7% of Americans who signed up for a TV subscription added HBO Max, according to survey data Hub shared exclusively with TheWrap. That figure spiked to 13% in December — a trend that coincided with Warner Bros. announcing all 17 films it had pegged for theatrical releases in 2021 would also premiere on the new streaming service. The jump in new subscriptions also coincided with “Wonder Woman 1984” hitting HBO Max on Christmas Day. 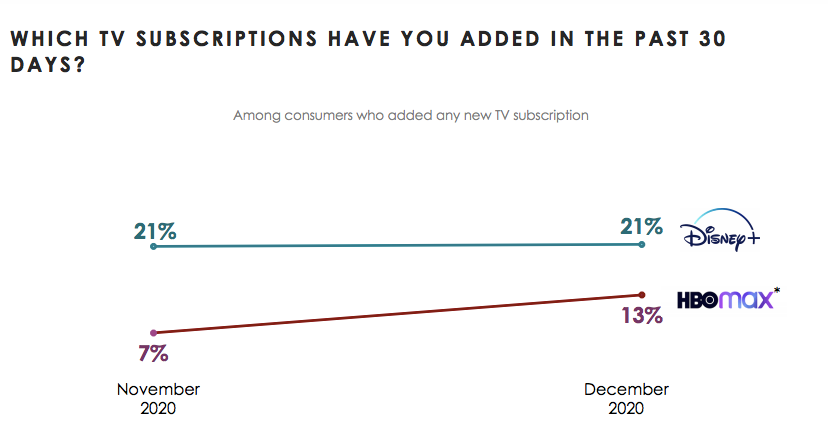 On top of that, 19% of subscribers who added HBO Max in December said they did it primarily to watch movies — up more than 500% from the month prior, when only 3% said movies drove their decision.

The clear takeaway, based on Hub’s survey data and HBO Max’s subscriber gains, is that pushing its major releases to streaming has been working. The goal, after all, was to drive new sign-ups and ultimately push HBO Max into the upper-echelon of streaming services. It still has a long way to go: Netflix, the industry leader, has 203 million global subscribers, and Disney+ racked up nearly 95 million subscribers by the end of 2020.

There’s also a financial point that can’t be ignored: WarnerMedia, according to MoffettNathanson analyst Craig Moffett, is projected to miss out on $1.2 billion in lost box office revenue by shifting new releases to HBO Max. The service, in other words, has to post strong subscriber gains to help offset the money its not getting from theaters. Still, considering HBO Max got off to an underwhelming start, with HBO customers confused about which HBO streaming service they should actually sign up for, December’s data is trending in its favor.

There’s another reason HBO’s bet could pay off: Churn. Every streaming executive is concerned not only with pulling in new subscribers but also how to keep them from canceling and maintain those monthly payments. By offering a steady diet of would-be theater releases in 2021, HBO Max is giving users a good reason to hang onto their accounts month-after-month, Hub principal analyst Peter Fondulas told TheWrap.

“Our research [indicates] 30-40% of people are ‘serial churners,’ where they’ll add a service, watch one series or event, then drop it right afterwards,” Fondulas said. “This is a way for [HBO Max] to have people look forward to the next thing that’s coming out, rather than cancel, only to re-subscribe the next month because there’s a blockbuster release they want to see.”

He added: “This is one way to hedge against that and help convince people to hang onto the service, because there’s a regular stream of interesting and new content coming out.”