In the original and in “Wakanda Forever,” heroes and villains are deeply layered, reflecting real-life issues facing people of color around the world. 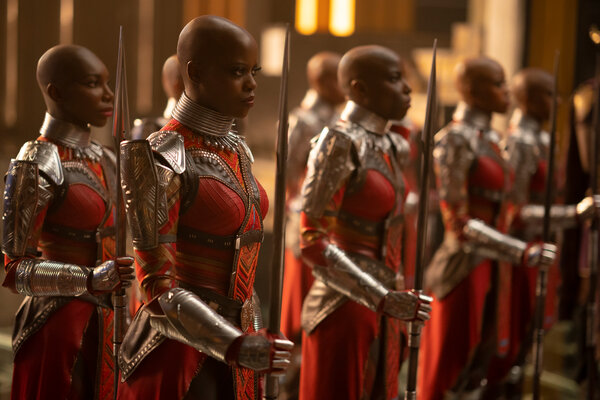 What ingredients make a hero or a villain? Despite so many film franchises’ attempts at bringing nuance to the dichotomy between good and evil, their formulas for these characters, particularly in the Marvel Cinematic Universe, seem painfully reductive: Heroes make speeches about justice and fight to valiant, soaring theme music. Villains? God complexes and more stylish fashion.

A notable exception is the “Black Panther” films, which imbue heroes and villains with a complexity that derives from the politics around colonization and the African diaspora. In these movies, the line between hero and villain isn’t simply one between good and evil; it’s a boundary defined by the relatable ways each side reacts to the real enemy: the white nations and institutions that benefit from the enslavement and disenfranchisement of people of color.

“Black Panther” and particularly the new sequel, “Black Panther: Wakanda Forever,” exhibit a reverence for their heroes that’s rooted in familial and cultural legacy. T’Challa (Chadwick Boseman), the king of Wakanda with a superhero alter ego, is grounded in and supported by his lineage: not only do his mother and sister act as his moral foundation, but so do his father and the Black Panthers who have come before him. It’s noteworthy that the ceremony to become the next Black Panther involves being buried and speaking to ancestors for guidance.

“Wakanda Forever” begins with the death of T’Challa (from disease, like Boseman, who died from cancer in 2020). The movie honors T’Challa with a gorgeously filmed and choreographed funeral sequence. And it’s clear this is not just about building emotional stakes in the film. “Wakanda Forever” is honoring Boseman himself, showing clips from the first film and allowing the other characters to fully address their grief so that his death doesn’t become just another plot twist or issue that the narrative needs to work around.

In “Black Panther,” T’Challa’s typically even-keeled, empathetic personality is tempered by his occasionally less than resolute political stances. At first he follows his family’s policy of keeping Wakanda and its resources isolated from the outside world. Then his decision, at the end of the film, to reveal Wakanda’s existence sets off a chain of events that leads to the central conflict in the sequel. Boseman’s, and, thus, T’Challa’s, premature passing begs the question of how the Black Panther would have evolved as king: how would he have ruled Wakanda given his decision to abandon the nation’s isolationist attitude and open it up?

The sequel wisely poses that weighty question to Shuri (Letitia Wright), whom the film also entrusts to carry our rage and grief over T’Challa’s death. In order to become the Black Panther, she has to overcome these feelings — symbolized by the appearance of Killmonger, the first film’s antagonist, in a vision brought on when she eats the Heart-Shaped Herb.

Her grief is recognizable. In T’Challa’s absence, Wakanda begins to resemble so many Black communities in which the women are left to mourn and then take charge after the men die, the victims of poor health or violence. Of course Shuri feels wronged and spends the film being warned against her rage — “Wakanda Forever” is well aware of the enduring angry Black woman stereotype and surmounts it by having Shuri harness and work through her anger, ultimately evolving to become the hero in the end.

On the flip side, the villains of the “Black Panther” films aren’t clear-cut enemies but victims of structural racism: Killmonger in the original and Namor in the sequel are righteously angry men of color who are responding to the ways their communities have been damaged by several great -isms (including capitalism, colonialism and, again, racism). Killmonger, who grew up in Oakland without a father and with all the disadvantages that come with being a Black man in America, wants to use Wakandan technology to empower Black people all over the world. His plan is violent, but it’s not far from the Black Power movement’s extreme factions in the 1960s. (That’s when a group of Black Panthers with guns protested at the California Statehouse, proclaiming, “The time has come for Black people to arm themselves.”)

Namor, the king of Talokan, a hidden Atlantis-style underwater civilization of Indigenous peoples, is a direct victim of colonization who has witnessed the enslavement of his people. He fears that Talokan might be discovered now that America and its allies are searching for vibranium. Will his people be at risk of exploitation and violence from white nations as a consequence of T’Challa’s decision to reveal Wakanda and its resources?

On one level the conflicts in these movies are insular: communities of color are set against one another, which is so much more real than an evil robot or a big purple dude snapping half the universe away. But in “Wakanda Forever,” although the big battle is between Wakanda and Talokan, the actual villains are the countries searching for vibranium in their bids for power. In an early scene at the United Nations, Queen Ramonda confronts diplomats demanding access to vibranium; their countries have sent undercover agents to raid Wakanda’s vibranium facilities, and have searched the ocean for other possible stores of vibranium, aiming to use the precious metal to further develop their weaponry.

In “Black Panther,” the film tosses us a red herring in the form of Ulysses Klaue, one of Black Panther’s main nemeses and the son of an actual Nazi in the original comics. Klaue is perfectly set up as the bad guy: he’s a criminal mastermind, a shady profiteer who sells weapons and artifacts, many from Wakanda. A more predictable film would have maintained him as the big bad guy and brought Killmonger in as a villainous sidekick — a Black man misled by anger, but still likely to redeem himself by the end. With his murder of Klaue, Killmonger may have supplanted him as the antagonist, but the reality is that the fountainhead for Killmonger’s fury and militant politics are society’s racial inequities, exploited by Klaue, Europeans and others who see Black people primarily as a means to building wealth, tracing all the way back to the trans-Atlantic slave trade.

When Shuri is forced to confront Killmonger, which means confronting the part of her that’s angry and hurt and hardened by grief, the film implies that this is a common duality Black people embody today, that we must simultaneously hold our personal sense of dignity and righteousness, like a Wakandan royal, and our outrage and shame, like Killmonger. Does that make any one of us less than a hero? No, these films say, because in the end there’s still a Black Panther protecting the nation.

In these films, the true villain is a history of white oppression and power, but the enemy — whether another person of color or a Black person elsewhere in the diaspora — is on the same team.