How do you tell the story of the coronavirus pandemic? How will the events of the past year — both catastrophic and intangible, global and intimate, diffuse but interconnected — be inevitably abridged for audiences of the future?

Historically, epidemics have had a way of resisting collective memory. After the bubonic plague in London, it took more than half a century before the arrival of an enduring literary account of the scourge, Daniel Defoe’s “A Journal of the Plague Year,” in 1722. The flu pandemic of 1918, which killed tens of millions around the world, left a remarkably small footprint on 20th-century literature and film.

This pandemic will be different. Contemporaneous television shows about life during Covid-19 are already available, offering previews of how posterity might remember this moment, even as it remains far from resolved. Recently, they were joined by the first major feature film to be set during the pandemic — “Locked Down” (HBO Max), in which an unhappy couple (Anne Hathaway and Chiwetel Ejiofor) uses forced downtime to plot an improbable heist at Harrods, the London department store.

I called the screenwriter of “Locked Down,” Steven Knight (the writer-director of “Locke”), in Gloucestershire, England, to talk about how he wrote the pandemic, what archaeologists will uncover about this era and the value of pre-empting the “tidiness” of history. These are edited excerpts from the conversation.

When did you first think of writing about the pandemic?

STEVEN KNIGHT It was late summer, about six weeks before we started shooting. I had started writing an exchange on Zoom between two people just for fun. It was the idea that, rather like “Locke” [the 2014 Tom Hardy film that takes place almost entirely during a long, late-night drive], you could take the limitation and do something with it. At the same time, I was talking to Doug Liman [the director of “Locked Down”] about another project, and we started talking about Zoom and lockdown and how it was affecting us. And then we started imagining that we could make a film, and talking about plots, and Harrods, and then we just did it.

There are some Zoom scenes in the movie, but obviously it changed from that initial idea. What made you go in a different direction?

KNIGHT We thought it would be a good idea to cut between Zoom and live action, so that you get to see the characters go to the real world. But we still wanted to keep it as claustrophobic as possible until we get to Harrods. We had such great actors, I think it would have been a shame to just limit them to the head and shoulders.

Did you always know who the characters were?

KNIGHT I knew I wanted a relationship that had run its course, with one person who had outgrown the other. In the normal world, they would be separating, but, because of the crisis, they’re forced to stay together. Their identities have been defined by what they do for a living: one’s a delivery driver, the other’s doing really well in a marketing company. What happens when those definitions become less important because they’re not working anymore? Do they go back to who they were when they fell in love? That’s the thing I wanted to explore, as well as the madness that was going on in London at the time.

What aspects of life amid the pandemic felt important to include? Had you been keeping notes?

KNIGHT What was interesting to me was the way that vocabulary changed, the way new words and phrases were created. People were responding to a brand-new situation, so you get expressions like “social distancing,” “new normal” or “Covid-friendly.” Even the way people talk and the way they behave on Zoom is something new. The idea of what your background is, or that who you are is identified by the bookcase behind you. If you were an archaeologist digging into this time period, you’d find all these little changes in culture starting to emerge. 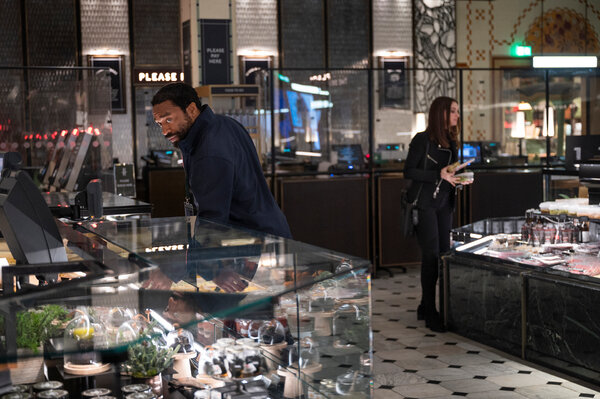 Was there a moment with the screenplay when you felt confident that the movie would work?

KNIGHT At a certain point I learned that the big department stores in London had emptied out all of their super-expensive stock. They were afraid there would be riots and looting, and so, over a five-day period, all of this stuff was taken out in a kind of panic. I got talking to people at Harrods, and they said that they’d had franchise managers from places like Gucci taking millions of dollars’ worth of stuff in plastic shopping bags and getting into black cabs.

When reality offers you such an unusual dislocation of what is normal, a situation that no one has been through before, it can be quite gleeful to write about — it’s like stepping on fresh snow. It also felt like an opportunity to offer up some characters who find an opportunity. There’s the Churchill expression about never wasting a good crisis.

Were there multiple drafts of the script?

Was it challenging working that way? With no safety net?

KNIGHT I personally love it. It’s more like theater — it’s almost live. You just have to get it out. And it felt like the right way to do it in this situation, because we wanted to prove that it can be done. It’s funny, now there are all these new ways and techniques of filming [during] Covid. But we were doing it before any of that was in place.

I think when most people think about their lives over the past year, stuck at home all day in sweats or pajamas, it doesn’t feel especially cinematic. What about the experience did you think lent itself to watching onscreen?

KNIGHT I’m always attracted to situations that enclose people. I think if you have two people stuck in an elevator for a long period, their conversation is going to be so heightened. There’s something about that environment that it gives you a shortcut into who people are underneath. And the thing that I’m interested in is how people talk, what people reveal when they’re under that sort of circumstance.

There’s a French filmmaker whose name I’ve forgotten who said, “If you point the camera at anyone and ask them to talk about themselves for four minutes, by the end of the four minutes, you will be convinced they’re insane.” In daily life, we are the delivery driver, or we are the marketing personnel, we are the thing that’s defined by our roles. But when all of that is uncloaked, when everybody is just still and can’t go anywhere, the thing they really are, I think, starts to come to the surface. I’m sure it happens in huge adventures and crises and war. But when it happens in these small situations, like in “Locke,” where it’s one man driving from one place to another, that isolation is what I see as the microscope.

The other big question that hangs over a project like this is the timing of it. I think a lot of people aren’t sure they want to revisit the spring of 2020 right now. How did you approach that problem in writing the story?

KNIGHT I’m a believer in you write what comes to you. If you have the conversation with yourself in advance, “Is this what’s going to be popular?” I don’t think I can do that. At the time we started this, I was writing lots of other things as well, but this is what kept coming up. The great thing is people have a choice. If it is painful, I completely understand that is the case for some people. But I’m hoping that doing something like this — it’s the human reaction to adversity throughout history. You try to make sense of it somehow, or you look for a silver lining.

What’s your appetite for watching movies about the pandemic?

KNIGHT Well, I think it’s going to spawn all kinds of things, just like the Second World War: novels, films, comic books. We were very anxious to be the first. We may not be the best, but we’re the first, and we did it while it was still fresh and raw. History tends to tidy things up, to find patterns and discard things that don’t fit into the pattern. And I think as this moves on, there’ll probably be a view that it had a beginning, middle and end, and that certain things were inevitable while others were never going to happen. But, in the middle of it, like a war, you don’t know who’s going to win. You don’t know what’s going to happen. And I think it’s important to capture that phase of uncertainty as it really was.