LONDON — Bukky Bakray never thought acting was a real possibility for her. So she’s struggling to get her head around winning a BAFTA — the British equivalent of an Oscar — for her first role.

“It’s kind of unbelievable,” Bakray, 19, said in a video interview recently, searching for the words to describe her win for playing the titular character in the coming-of-age movie “Rocks.” “I just didn’t expect it at all.” 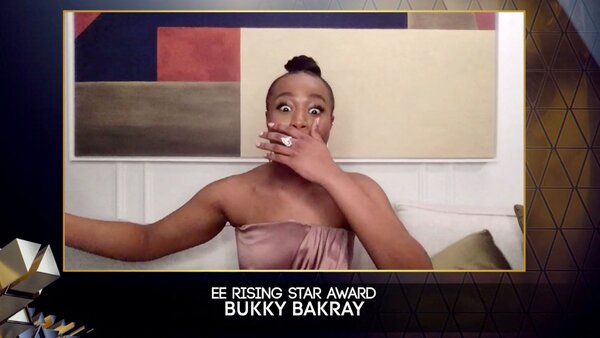 At the BAFTA ceremony on April 10, Bakray took home the Rising Star Award and was also nominated in the leading actress category alongside the likes of Frances McDormand for “Nomadland” and Wunmi Mosaku for “His House.”

Bakray said, “Sometimes when I look back at the pictures I’m like, ‘Did this actually happen?’”

“Rocks” — which was the most-nominated film at this year’s BAFTAs — was released in Britain last fall to critical acclaim, and is now streaming on Netflix in the United States. The movie was shot in the summer of 2018, when Bakray was 15 and a student at a school in East London. Like most of the cast, she was discovered through open auditions and workshops at schools and youth clubs in the city.

In the film, Bakray plays Olushola Joy Omotoso, known as Rocks, a 15-year-old British-Nigerian girl whose life is upended when her mother, who struggles with her mental health, disappears, leaving only an apology note and some cash. Rocks is left to care for her 7-year-old brother Emmanuel (D’angelou Osei Kissiedu), doing whatever she can to evade an intervention by the social services.

“Rocks” is equal parts joyful and heart-rending: an ode to friendship and the beauty of girlhood, but also a deeply affecting exploration of how external forces can threaten the blossoming of those things.

For many women who have been educated in London’s public school system, the scenes in Rocks’ East London school will feel deeply familiar and authentic. The girls dance and make up raps, and treat each other with a mix of impertinence and genuine love and care. In the school’s bathroom, we see Rocks’ best friend Sumaya, played by the British-Somali actress Kosar Ali, talk her through using a tampon for the first time.

The director, Sarah Gavron, said in an interview that the idea for the film had started to emerge when she was traveling for her 2015 historical drama “Suffragette.” At screenings, she said, she heard young women connecting women’s suffrage to their own lives and concerns, piquing her interest in what contemporary girlhood was like. So she approached the producer Faye Ward with an idea: What if they made a film about girlhood and built it with the girls themselves?

Having such an open-ended idea bred collaboration at all levels, Gavron said. “Everybody sort of fed into it because it was a bit like, ‘We don’t have a road map, how are we going to do this?’”

The research process was kicked off by Lucy Pardee, the film’s casting director, who has built a reputation for discovering talent and who also won a BAFTA for her work on “Rocks.” She spent time sitting at the back of classrooms trying to glean the rhythms of teenagers’ lives, she said in an interview. It was during this phase that Gavron and Pardee first met Bakray.

“We didn’t want to do that thing that lots of adults do, which is project our own memories and sense of what being a teenager was onto modern teenagers,” Pardee said in a video interview. “We wanted to get a sense of what their dramas were, what their lives were.”

Open auditions were held to find the cast (Pardee and her associate Jessica Straker saw about 1,300 girls), while workshops were run with teenagers to help build the world and characters around the story that Theresa Ikoko, a British-Nigerian playwright, and Claire Wilson, a television writer, had in mind. Out of those processes, the main cast emerged.

While the young actors don’t play themselves in “Rocks,” they were able to feed into the development of the characters. Ikoko brought the scene breakdowns to the actors and asked them to complete exercises, such as writing a diary for their character and deciding what their character’s favorite songs were. That information then informed the script.

The actors’ essence was also a big part of the writing process, Ikoko said in an interview. She recalled speaking to Anastasia Dymitrow, who plays a character called Sabina, about her pride in identifying as Polish Gypsy. The comment was ultimately included in the film, when Dymitrow’s character talks about her grandparents and their imprisonment in Auschwitz.

Referring to the process, Bakray said, “I’d never felt listened to like that before in my life,” recalling that a stray comment she had made about how she used to ritually buy a cake after school with a friend had ended up in a draft of the script. “It made you feel like you had something of substance to say,” she added.

“Rocks” is unusual even among Black British films, which are more likely to follow the narratives of young Black men.

For many British women of color, the opportunity to see their lives and experiences reflected so accurately in film is extremely rare. Tobi Oredein, the founder of Black Ballad, an online platform for Black British women, wrote last year, “For the first time in my life, I saw a girl who looked similar to me and my friends as we ran around secondary school trying to figure friendships, education and life at large.”

Ikoko — who hadn’t co-written a film before “Rocks” — credited Gavron and Ward for getting the movie made.

“I wouldn’t have been able to make this film if I said ‘I want to make a film about being a young girl from Hackney,’” Ikoko said.

“There needed to be a first, and the way the industry is set up, firsts have to happen when people like Sarah and Faye use their power and their privilege and share that and open those doors,” she added.

When it came to shooting, the filmmakers were aware of practices or “invisible” training that could make it easier for the first-time actors. During preparation workshops, the girls were filmed so that they would become accustomed to being on camera, and the movie was shot in chronological order to help them to get into the story.

There were a lot of scenes that required vulnerability, and the production gave the cast space to try and display those emotions.

Bakray said that putting such feelings out in the open was tough. “Pre-shooting, we had a lot of conversations, because they were getting young women that were from backgrounds where we weren’t necessarily emotionally available, that’s not how we grew up,” she said.

“We grew up to be strong,” she added

Three years after “Rocks” was filmed, members of the production team are still taking an active interest in the careers of the young actors they helped put onscreen.

Bakray, who spoke from Birmingham, where she is currently filming her next project, said she had work through the end of the year. She said she planned to go to drama school and has auditioned for the Royal Academy of Dramatic Arts and for the Guildhall School of Music and Drama.

“I feel like kids are sponges,” she said. “And these guys caught me at my prime sponge phase.”