Like a lot of hot young actors who play someone like Edward Cullen in five different films, it seemed like, once it was over, Robert was never going to escape the stereotypes of the Twilight fandom. But it’s been 11 years. He is altogether a different man, and we need to show some damn respect.

Since his time playing a sparkly vampire, Robert’s been turning himself into an artsy dude behind your back, and the two films he has coming out this month are the only proof you need. He stars opposite Timothée Chalamet in Netflix’s The King (in theaters Oct. 11, streaming Nov. 1) and with Willem Dafoe in The Lighthouse (Oct. 18).

Let’s start with The Lighthouse. Robert plays a lighthouse keeper (feels self-explanatory) named Ephraim Winslow who gets stranded during a brutal storm. He slowly goes insane, but there’s something about his old-timey American accent/clothes/weirdly chiseled body you find hot despite that being the total opposite point of the movie. The biggest shame is he’s only shirtless in, like, two scenes. Plus, the whole film is shot in black and white, and in a format that’s square instead of rectangular. Nothing screams ~Acteur~ quite like black and white.

In The King, Robert plays basically the opposite of his Lighthouse character—a French prince who has to face the King of England (Timothée) in battle. Not only is he blonde, which is maybe the most surprising and amazing hair transition I’ve ever seen, but he has an accent I would literally pay to hear on a loop for the rest of time. He’s only in a few scenes, sure, but he’s such great comedic relief he steals the show. Who knew he could be funny?! It’s a delight.

Look, I’m not sure exactly when Robert decided to become the cool guy he is now. Maybe it started with The Lost City of Z, in which he had a full-ass beard and looked pretty damn odd. Critics loved him in it, so I can imagine why he’d be like, “Okay, great, how can I get even weirder than this?” 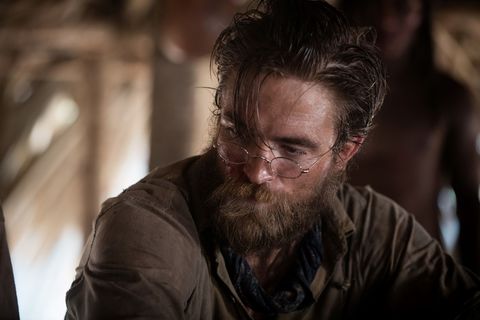 Let me direct you to this video he wrote and directed for GQ, as an example. It is truly off-the-rails in the best way possible. He’s weird, and we have no choice but to stan.

So yes, while we do have Twilight to thank for bringing us the quirky and odd gift that is RPats, it’s time to leave that behind and think of him as *more* than that. He deserves it, and frankly, so do you.