This summer, one of the most versatile performers working today returns to the screen. Over the past 24 years, he has been strapped to a rocket, dangled out of an airplane and rudely dismembered. He has proved himself a consummate comedian, a fearless action hero and a compelling leading man, all while eerily maintaining his youthful looks.

“Woody just shows up. He seems to just have a lot of facets to him, a lot of interesting angles and a lot of richness,” said Pete Docter, a central figure at Pixar since “Toy Story” (1995) and now the studio’s chief creative officer. “Not every character has that.”

Since “Toy Story” began, Woody, the diminutive protagonist, has delivered what are, by any measure, delightful and engaging performances. Behind them are Hanks’s brilliant voice work and the combined efforts of scores of animators — around a hundred on “Toy Story 4” alone. 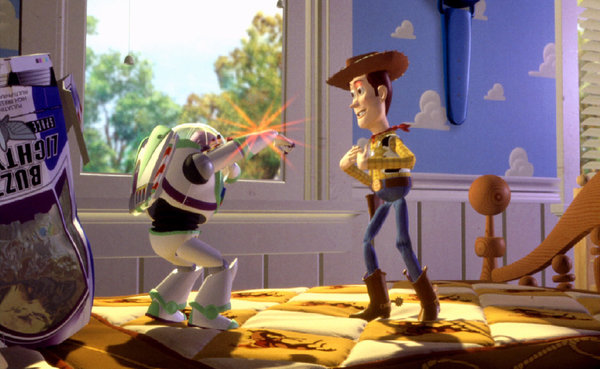 These artists understand that excellent animation boils down to good acting.

“We are all introverted, almost closeted actors,” Becki Tower, a directing animator on the new film, said. “We are acting through our characters, through our puppeteering.”

“It’s the ability to really convey the interior world of thoughts and feelings of a character through movement,” Docter said. “A lot of animators have the acting bug but are too scared, or intimidated, or don’t feel as in control of their own body the way an actor would need to. It’s a more natural thing, then, to pick up a pencil and express it that way.”

A live-action performance occurs, often intuitively, in the moment, while animation can look more like the work of technicians than thespians. Laboring in dimly lit rooms on the Pixar campus in Emeryville, Calif., animators spend a lot of time staring at their computer monitors. With Woody as something like their high-tech onscreen marionette, they painstakingly contrive one pose, one movement, and one facial expression at a time — frame by frame, scene by scene — until he begins to resemble a living, breathing character.

As Brad Bird, director of “The Incredibles” films, described it in Ed Hooks’s animation manual “Acting for Animators,” character animation is trying “to catch lightning in a bottle one volt at a time.”

In “Toy Story 4,” there are even more emotionally delicate scenes that hinge on what appear to be deeply felt performances by its cartoon cast, especially in Woody’s case. (He also gets trodden on.) “I knew from the very beginning that, this being a movie about relationships, I was going to be leaning on the animators’ acting very heavily to carry a lot of the emotion,” Josh Cooley, the film’s director, said. “It really is like being a live-action director where you go and you talk to the actors. And in my case the actors are the animators.”

Hanks himself freely admits there’s more to Woody than his voice and line readings. “The team has poured the better part of three years of their lives into it,” he says. “There’s so much work that I had absolutely nothing to do with.”

The animators do their homework. Some take inspiration from the mannerisms of voice actors during filmed recording sessions. Others will act out the film’s blocking themselves, in the studio’s ground-level acting room, which is equipped with video recording equipment and fitted with floor-to-ceiling mirrors. A few will sign up for in-house acting and improvisation classes (though, as one animator noted, the enthusiasm for performing in front of colleagues is “minimal”), while others prefer to study and dissect live-action screen performances, or spend the educational allowance they receive on theater tickets.

Still others working on the new film found it useful to spend hands-on time with actual toys from the franchise.

More intangibly, but perhaps most crucially, animators learn to empathize with their characters, and invest their performances with their own memories and feelings. As far back as the original “Toy Story,” Docter, who said he had been feeling outshone by a new hot shot animator, was able to draw from a personal place when evoking Woody’s punctured confidence at the arrival of Buzz Lightyear.

“It’s about trying to connect to a moment in your own life and trying to pull from a real place from inside yourself,” the supervising animator Robert Russ said.

At its best, animating can be an emotional workout, Tower said, adding, “In order for you to put emotion into your shot, you actually have to be really emotionally vulnerable.”

As Docter describes it, behind the scenes of “Toy Story,” the first computer-animated feature film, there was a collective realization that Woody was turning out to be an exceptionally capable actor. The new medium, with its powers of minute detail, and the ability to endlessly recalibrate and fine-tune a character’s gestures and expressions, opened up new possibilities of nuance in character animation.

“Woody did this thing with his eyes,” Docter said, describing a scene animated by Doug Sweetland, “which was nothing I’d ever seen in hand-drawn animation. The subtlety of these little eye-darts that were very indicative of an inner life, these thoughts racing through Woody’s head. Everybody’s hair stood up. You know, oh my gosh, this is a new discovery.”

“Subtle, subtle animation — a dart of the eyes, a slight flicker of the eyelids, or a little lean of the head — maybe you could achieve those on the best days in hand-drawn animation, but not really at the same level,” Russ said. “That type of refinement is not possible in other forms of animation, and not all CG animation studios go to the trouble. That’s something that we really value as a studio and as animators.”

These days, animators are having long discussions about when exactly Woody should blink, and how fast.

With advances in the technology, animators now have more time to polish their shots, and Woody has arguably become a finer, more controlled performer than ever. The 1995 Woody had 596 “avars” — or animated variables — that animators could manipulate; the current model has 7,198. In other words, his face is more subtly expressive, and his limbs have loosened up, as if he’s been working on what the influential acting teacher Konstantin Stanislavski called — appropriately, in this case — “the plasticity of motion.” You might say, thanks to more sophisticated shading and texture-rendering, he’s gotten more handsome too.

But Woody’s performance has also benefited from the sensitivity of the actor-animators who have taken the trouble to get to know him, and even care about him.

“You’re in the head space of these characters for months and months, sometimes years,” Tower said. “You end up knowing these characters so well they feel like a friend, and your shots actually get easier because you understand who they are. You can go there.”