“Jupiter’s Legacy” is about the world’s first superheroes struggling to pass on their decades-old code of values to their superpowered children as their enemies become more dangerous. “Sweet Tooth” is a fantasy series where many children have been born as half-human, half-animal “hybrids.” Gus, a human-deer boy, sets out on a journey across a post-apocalyptic America looking for answers about himself as he’s being hunted.

But Netflix’s Peter Friedlander, who runs the team behind them, talks about both with the same sense of wonder.

“It’s fun for me to mine these worlds that do have existing fandoms that you hope you can ignite around a visual medium and expand upon them,” Friedlander told Insider during a recent interview ahead of the release of “Sweet Tooth” on June 4.

Both shows are part of Netflix’s grander content ambitions as it looks to build bankable franchises or “spectacle” programming that can compete with established Hollywood IP from the likes of Disney and WarnerMedia. Netflix said it would spend $17 billion on content this year, up from $11.8 billion last year when the pandemic slowed production.

“The thing that many studios are able to do is create great franchises,” Netflix’s co-CEO Reed Hastings told The Hollywood Reporter in September, when asked what Netflix could learn from Hollywood. “We’re making great progress on that with ‘Stranger Things’ and other properties, but compared to ‘Harry Potter’ and ‘Star Wars,’ we’ve got a long way to go.”

Friedlander is helping Netflix get there.

How Netflix defines a spectacle or event series

Friedlander joined the company in 2011 as its first employee dedicated to original series; a decade later, after playing an essential role in Netflix hits like “House of Cards” and “The Haunting of Hill House,” he’s overseeing a new spectacle and event TV division introduced last year to help Netflix achieve its lofty goals (Kelly Luegenbiehl leads a new franchise TV team).

Friedlander described the content under his team as being in two buckets: visual-effects driven, IP driven fantasy, sci-fi, and action programming (spectacle TV) and prestige limited series like “The Queen’s Gambit” and “When They See Us” (event TV).

Friedlander said that his team is responsible for scouting IP with potential to turn into shows, but they also hear pitches from creators. The team is composed of directors, managers, and associates across the original series division, and supported by other teams like business affairs, which negotiates contracts.

“There is no checklist,” Friedlander said of the content he looks for. “It’s not just me, but a number of talented, passionate superfans inside Netflix that are constantly mining IP or hearing pitches from storytellers that are so riveting they seem undeniable.”

While Friedlander’s shows don’t technically start out as “franchises,” he said that the two teams — spectacle/events and franchises — will often work together. Netflix thinks about franchise shows as those that have spinoff potential, like the hit fantasy series “The Witcher.” Netflix is already developing a prequel series, called “The Witcher: Blood Origin,” and an anime movie.

“I’m hoping that the spectacle shows we’re creating could one day become franchises,” Friedlander said. “The franchise team focuses on building those out.”

What’s most important to him in a story is whether a show is relatable, even if it’s about a family of superheroes or a deer-human hybrid.

“It’s about the ability to emphasize with a character you didn’t think that you would,” he said. “I’m always looking to be put in other people’s shoes and look through other people’s eyes.” 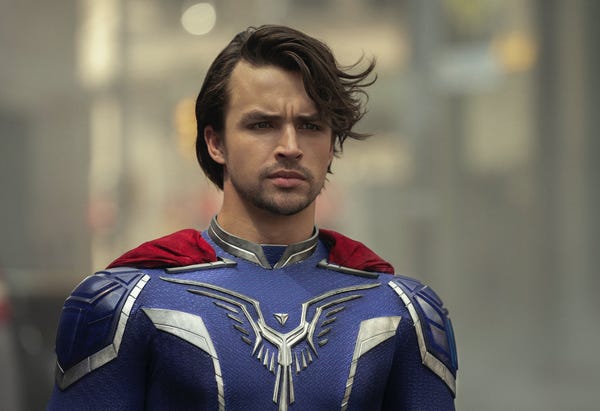 Netflix had 90 TV shows in early development or production based on books, comics, manga, or video games as of March, according to the research firm Ampere Analysis. Book adaptations lead with 60, and the remaining 30 were comic, manga, and game adaptations.

Some of those adaptations are projects that Friedlander and the events/spectacle team are overseeing. Here are a few:

Millarworld, the comic-book company founded by Mark Millar, is also under Friedlander’s purview. Netflix bought it in 2017 in its first acquisition to develop content based on Millar’s comics. The first was “Jupiter’s Legacy,” which spent a week at the top of Netflix’s daily lists of its most popular shows in the US earlier this month.

“We knew we had something special when a team of superheroes is arguing at the dining table and then going off to fight a villain,” Friedlander said.

“Jupiter’s Legacy” is only the beginning for Millarworld at Netflix.

Millar has a board in his office with the next five years mapped out, he told Insider earlier this month. The plans include “American Jesus,” about a teenager who discovers he’s the resurrected Jesus Christ, and “The Magic Order,” which was postponed due to the pandemic but that Millar called a “top priority” along with “Jupiter’s Legacy.”

“We were drawn to the breadth of Mark’s creations and stories,” Friedlander said. “With his existing IP as well as the stories yet to be told, we knew it was a really great opportunity to have him as a partner.”

Next up for Friedlander’s team is “Sweeth Tooth,” based on the post-apocalyptic DC comic by Jeff Lemire, which he described as a “fairy tale” with elements of drama, adventure, and sci-fi.

“It has a real sense of adventure about it, but it also has a sense of hope and wonder,” Friedlander said. “Gus’ journey is both an emotional one as well as an adventurous one. As people experience the show it’ll be like peeling back layers of an onion — there’s something new with each episode.”