We asked four young stars of the present to watch the influential sci-fi films that seemed futuristic back in the day. Here’s what they thought.

If you were a moviegoer in the 1980s, you were constantly presented with imaginative questions that seemed cosmic and existential. Would humanity someday settle its differences here on earth and learn to travel the stars as a unified species? Or were we destined for a dystopian future with little more to look at than smoggy skies and gargantuan billboards? Did our advancing technology have the ability to literally absorb us or replace us entirely? Might we someday encounter alien life that was intelligent and benevolent? Surely some of these questions would be answered by the far-off future year 2000.

“Blade Runner,” “E.T. the Extra-Terrestrial,” “Tron” and “Star Trek II: The Wrath of Khan,” all released 40 years ago, in the summer of ’82, have become foundational works, shaping the next several decades of fantasy franchises. But what if this wasn’t the science-fiction cinema you grew up with? What if you came of age in a later generation, and knew these movies only as celebrated if somewhat distant influences? Would they still seem exciting, innovative and thought-provoking? Or — to confront another terrifying speculative scenario — would they just seem uncool?

To find out for ourselves, we enlisted four stars of the current day — all born in the 21st century — and asked them each to watch one of those seminal science-fiction films. They shared their reactions and reflections, didn’t judge the special effects too harshly and still shed tears when they thought E.T. died. These are edited excerpts from those conversations. 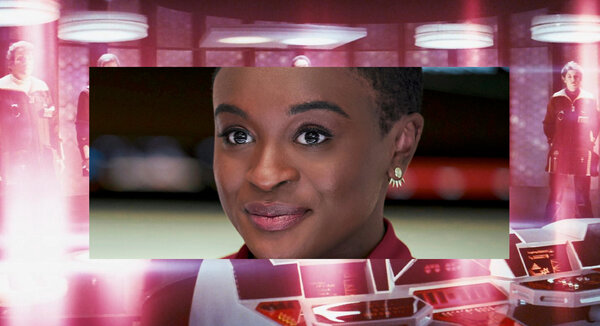 I knew that Khan was Captain Kirk’s most famous rival, and I found both of their performances [William Shatner as Kirk and Ricardo Montalbán as Khan] really engaging. Khan is very much a dictator in the way he runs his crew, and Kirk is — I use the word very cautiously — a diplomat who takes his crew into further consideration. Their back-and-forth and their banter is very of the times. It’s two confident men just trying to poke at one another, and Kirk knowing just how to get under Khan’s skin, like when he says, “I’m laughing at the superior intellect.” It’s a really great reflection of how well they know each other, and how deeply they hate one another. The fact that the machoism of the men in charge has not changed in the future, I wouldn’t say it’s funny, but I find that very interesting. Like, yep, these are still two guys trying to see whose ship is bigger.

I don’t know how I made it this far without knowing that Spock dies at the end. I feel like a terrible franchise member. Even when I saw the title [of “Star Trek III: The Search for Spock”], there was no world in my mind where Spock died [in “The Wrath of Khan”]. I was like, oh, he got lost in some space grocery store. At first, I was like, they’re going to figure out a way to save him. And then, cut to: Kirk’s giving his eulogy and Scotty’s playing the bagpipes and I’m weeping. When people think of sci-fi’s best bros, they think of Kirk and Spock, and it’s heartbreaking to watch that love severed in some way. It was heartbreaking but beautiful, and I hope one day to be loved the way Kirk loves Spock.

The old “Tron” movie is one of my dad’s favorites. I went and saw “Tron: Legacy” [the sequel, from 2010] in the movie theaters with him. I remember us coming out at the end and he was just so disappointed. And I thought it was like the best thing ever. For months after, my brother and I would play this phone app that was sort of like the light bikes in “Tron,” and we would race against each other and try to cut each other off. I still like “Tron: Legacy,” but I definitely think the first “Tron” is better — I feel like the new one doesn’t hold a candle to the old one.

When I was really young, my dad still had his old Atari, and I grew up playing that. My brother and I played Pong together, a lot of Pac-Man. My mom would kick my ass in Donkey Kong. So I was very used to that era of games and that aesthetic. I was chuckling throughout [“Tron”] at some of the effects that definitely look older. But I was actually pretty impressed — I was trying to think of how they could have done this with the technology at the time, and everything that I could think of just sounds like so much work. I was like, dude, how are they pulling this off back then? Holy cow, these people were dedicated.

Young Jeff Bridges looks so different from how I know Jeff Bridges. I was really shocked. I was surprised at how charismatic he was. I thought of him in “True Grit” [2010] — this is so different. He was the hotshot coder at this huge gaming company and it would have been easy to play him a little nerdy, make him more run-of-the-mill. Back then, a lot of coders were stigmatized as odd people. But he played it straight the whole time. He was way too confident. I thought that was pretty cool.

I feel like it hit the mark. It’s weird, because it’s set in 2019 and now it’s no longer the future but the past. But the movie finally caught up to reality. It lets you take a good look at where humanity is at, vs. how people in the ’80s imagined the future. Forget about the flying cars, the electronics and technology — I feel like everyone of my generation is always searching for some higher purpose or trying to prove they’re worthy enough or special enough for the spotlight, or just worthy of more life. I find myself sympathizing with the replicants a lot more, upon rewatch, in a way I did not expect.

I’ve always seen Harrison Ford as this cool, Han Solo-esque guy all the time, but I’ve never really looked at his performance too much until now. Seeing his face, when he was getting alcohol at the bar after he killed the snake lady [Zhora, played by Joanna Cassidy] — oh, God, the vulnerability. Roy [Batty, played by Rutger Hauer], especially, is just a standout character for me. He’s clearly meant to be the nemesis or the villain. But the way he delivered his final speech — the awe in his face — he’s one of the only characters that truly realized how beautiful humanity and life are.

I felt super-existential after watching this movie. I was like, what does it mean to be human? What is the meaning of life? The usual sober Friday afternoon thoughts. It’s crazy to think that it didn’t get the attention it deserved when it came out in the first place. Honestly, I have tried to make people watch this movie. It’s a task. I don’t know if today’s casual moviegoing audience would be invested in a movie like this. It does require a lot of patience. I feel like you have to fully submit, emotionally and psychologically, to love it. And once you do, it’s phenomenal.

A star of “Stranger Things” watches “E.T. the Extra-Terrestrial.”

This was one of my big childhood movies. I had an anniversary DVD that I watched till it was scratched to [expletive]. Then it went away for a really long time, and then I saw it on 35 millimeter at a theater in Atlanta while I was shooting “Stranger Things.” Seeing it as a more formed person, I saw things a lot differently. For me, it was a lot of nerdy stuff. That opening scene, where the kids are playing Dungeons & Dragons, the way it’s lit — the whole room is basically dark except for the middle of the room, where they’re at the table, and there’s this super bright light that’s lighting the board and the kids. I was like, this movie is so well shot. But it’s Spielberg. Not a hot take whatsoever.

That movie also totally traumatized me. [E.T.’s apparent death] is a real punch in the face. But it’s so earned. It’s such a chaotic scene and it turns into a different movie. It turns into this really serious operation. Oh, we may never see these characters again. These two are in real danger. You’re watching a movie that’s a totally fun adventure and then something happens where you realize, life is precious and things can die. But it’s not a cynical film, whatsoever. It’s actually incredibly sweet. I was talking to my dad about it the other day and I was saying to him, I really would love to make a movie that’s for kids but I want a moment in there that will scare the [expletive] out of them forever. It’s fun and they remember it and it shapes who you are and what you’re scared of and what your sensibilities are.