There’s nothing small about “It.”

Stephen King’s novel about a gang of kids fighting a supernatural child killer in a small Maine town is more than a thousand pages long. The big screen adaptation necessitated two movies, the second of which, this weekend’s “It Chapter Two,” clocks in at almost three hours. The sprawling film, in which the members of the Losers Club are called back to Derry 27 years after the events of the first film, holds the box office record for the second biggest horror film opening of all time, just behind its predecessor. So, yeah, nothing small.

Unlike the first movie, so full of youthful energy, “It Chapter Two” concerns itself more with the aftereffects of trauma and the things that are lost with age. “It’s inevitably bleaker and less colorful, but that is ultimately what Stephen King is doing — he’s saying adulthood is a bummer compared to childhood,” said Andy Muschietti, who directed both films. “It’s a story about the loss of everything that is so beautiful about being a child, like the power to imagine, the power to believe in things that don’t exist.”

Muschietti recently spoke about some of the film’s more surprising plot points. These are edited excerpts from the conversation.

The ending in the book is fascinating, but it’s so weird. You see Bill Denbrough flying in the macroverse at 300 miles an hour, and he sees the giant turtle that created the universe.

For me, though, it was very important in both films to stay grounded, to tell the story through the perspective of the human characters. And whatever is on the other side of the macroverse, just keep it mysterious and cryptic. We’re never accessible to it because the characters don’t see it. It’s implied.

King actually succeeds at that for most of the book, but then he just goes for it at the end. If we had done what he did in the book, suddenly a movie that is a drama about a group of friends becomes a fantasy film. And this is already a horror movie. So I didn’t want to add yet another element.

There is a little science fiction in the film, though. Mike and Bill witness the arrival of “It” from outer space.

In the book, the kids see that moment after they hear that the original natives of Derry sat down in a hole to make a smokehouse, inhaled these herbs and tripped, allowing them to see things the human eye could not. I really wanted to include some version of that, because it gives you glimpses of a back story.

And people want back story, but if you give them too much, then they complain. I talk from experience. In “Chapter One,” when we had test screenings, people were fascinated by Pennywise, but they wanted to know more. Where does he come from, who is he? We had some money for additional reshoots and so we went out and did a scene that takes place in the 1600s, that explains a little bit of Pennywise’s first interactions with humans. And guess what? We put it in the movie, and people were very confused.

Just because the audience wants to know more doesn’t mean that you have to give it to them. The question mark is very important to me. It’s like a magician’s trick. There’s the instinct, when a magician shows you an amazing trick, everyone’s instinct is, “Show me, show me.” But if they ever were to explain it to you, you’d just say, “Oh, is that all it was?” 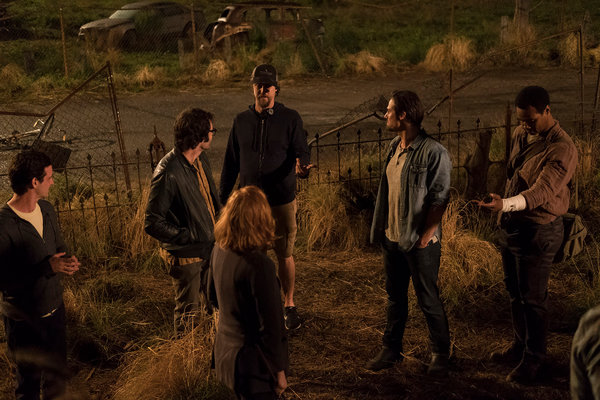 Given the success of the first film, was it easier to go big with “It Chapter Two”?

I didn’t suffer much in the second adaptation, because we had a bigger budget, so most of the ideas I had I was able to put onscreen. In the first movie, the final destruction of Derry is one of the things that was always going to be prohibitive, because of the money we had. I said, “Jesus, that’s going to suck up half the effects budget.” There’s a sinkhole and a giant standpipe that rolls downhill and everything floods.

But maybe it was a blessing in disguise, because what the movie actually needed was an ending with closure that is more related to the feelings of the Losers, more intimate and private.

[Read an interview with Bill Hader about how he navigated his character’s big secret.]

How did you decide to give Bill Hader’s character, Richie, the back story that he has? Those who read the book will be surprised.

In the palette of things that can torment you as an adult, fear of exposure was something that we hadn’t talked about with any of the other characters. So I came to the idea of Richie struggling with his sexual identity and having an event in his childhood that really left a mark. He was humiliated in that arcade and bullied, and that was a traumatic event that cemented the rest of his path. He is someone who doesn’t want to come out of the closet, and he builds a persona — this comedian who’s always making jokes about women and sex. All he’s doing is basically building a wall to avoid being exposed. At the end, he confronts that.

The way the Losers defeat Pennywise also differs from the novel — they sort of bully him to death by calling him names over and over until he shrinks down to almost nothing.

I didn’t see it as bullying so much as it was about reversing the power of belief on this creature, who uses belief as a weapon to kill his victims. It is a shape-shifter — he always has decided what shape he’s taking. For the first time, it’s the Losers who have this power, and they start telling him what he is in order to make him believe what he is: You’re a headless boy; you’re a weak old woman. And finally they converge on the concept of a clown which is just the most helpless and powerless thing. So he becomes smaller and smaller and smaller. The power of belief is Pennywise’s power, but it’s also his biggest weakness.

There are a few blatant horror movie references in the film — a “Here’s Johnny” moment from “The Shining,” a beat that’s straight from John Carpenter’s “The Thing.” Do you ever worry about whether or not that takes people out of the movie?

Yeah, I worry about it all the time. But my answer is always, “Let’s go for it!”