In this moody film, a 13-year-old girl in a Quebec town hides her pregnancy, but her trauma deepens as the identity of the father emerges. 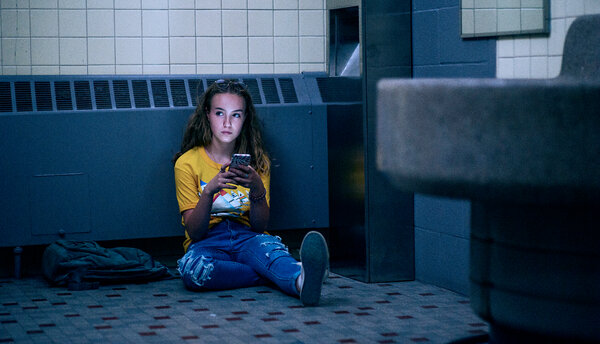 Jeanne Leblanc’s “Les Nôtres” goes beyond depicting the pain of harboring a terrible secret and into the realm of the numbness that follows. The 13-year-old Magalie (Émilie Bierre) is hiding that she’s pregnant, and when her condition is found out, many in her small Quebec suburb suspect the father to be the boy next door, Manuel (Léon Diconca Pelletier). Gradually the film reveals her connection with another neighbor, Jean-Marc (Paul Doucet), the town’s mayor and an insidious predator.

Magalie’s fairly clueless mother (Marianne Farley) is shocked to learn about her daughter, but the film’s strength isn’t the delayed suspense around unraveling the truth. It’s the sense of suffocation that Magalie feels while putting on the agreeable face of a child going about her school days. Leblanc and her cinematographer Tobie Marier Robitaille suffuse the film’s palette with tamped-down colors and send the camera creeping and looming around Magalie.

“Les Nôtres” roughly translates to “Our Own,” which might suggest a condemnation of ineffectual communities. But any societal judgment is less notable than the mood (which feels filtered through Magalie) and the sheer ordinariness of the middle-class neighborhood. That extends to the banal manipulator-in-chief, Jean-Marc (so underplayed by Doucet that one nearly expects some twist).

Magalie is able to vent some rage at a certain point, but the film’s drama wrestles itself to a standstill (along with leaving some characterization sketchy, like that of a concerned social worker). Yet Leblanc might come closer to the sensation of concealed trauma than movies with more familiar storytelling beats.

Les Nôtres
Not rated. In French, with subtitles. Running time: 1 hour 43 minutes. In theaters and available to rent or buy on Apple TV, Google Play and other streaming platforms and pay TV operators.