It is a truth universally acknowledged in world cinema that a celebrated auteur, making their first film outside their native tongue, must be preparing a dud. So news that Hirokazu Kore-eda was working on a film in French after his Palme d’Or for Shoplifters was cause for alarm. Would the world be forced to endure another My Blueberry Nights – the turkey served up by Wong Kar-Wai in his English-language debut in 2007 – after two decades of highly regarded work?

Kore-eda’s film, The Truth, is not a flop, yet there is a sort of musty air that hangs over it, a kind of stale not-quite-there-ness that is surely attributable to the master shooting outside of Japanese. The rest of his themes are all there: family, memory and its deceptions, childhood, and the casual acts of cruelty we inflict on one another. But this story, which pits Catherine Deneuve and Juliette Binoche in a head-to-head as a feuding mother and daughter, feels manifestly less potent than his usual work. An added complication thrown into the mix is that Binoche’s husband is played by Ethan Hawke, whose French is rusty at best – so the actor sits there in silence, smiling, while people around him expound in French, and occasionally plays a bit of guitar. Meanwhile, Deneuve, apparently left to her own devices, finds herself soliloquising about the chantilly cream served in her favourite restaurant. Something is awry.

The problems in this sort of situation are manifold, but the main two are these: how to create authentic-sounding dialogue and how to direct actors while not speaking their language. On the set of his French-language follow-up to the acclaimed A Separation, director Asghar Farhadi spoke in Farsi, with an interpreter translating his words into French. It’s an obvious risk, but The Past actually feels relatively authentic to its time and place, though the drop-off in quality from A Separation is notable. 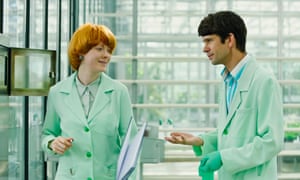 Other examples abound. This month sees the release of Jessica Hausner’s Little Joe – her first English-language film after a series of lauded releases including Lourdes and Amour Fou. The film was savaged when it was screened in Cannes last year, and, for all its audacity, it’s hard to untangle how much of the movie’s stiltedness is intentional. Hausner’s films have always tended towards the deliberate, but this is an ambiguity that the movie could have done without.

Yorgos Lanthimos represents a rare recent success story. After the acclaim for his films Dogtooth and Alps, the Greek director earned plaudits for The Lobster, and The Favourite went on to net Olivia Colman an Oscar last year. The Lobster works, perhaps, even better for the weird distancing effect of language in it. Lanthimos’s characters all speak in a strange staccato, and there is a blankness, a sense of dislocation behind his dialogue, which often leads characters to speak out of turn. This works pretty well in English; the director’s aim was never to reproduce authentic period speech patterns in The Favourite, after all.

It’s perhaps not coincidental that Bong Joon-ho should meet with the most acclaim of his career for Parasite, a film in Korean. (The director even told the audience at the Golden Globes: “Once you overcome the one-inch tall barrier of subtitles, you will be introduced to so many more amazing films.”) The director’s Snowpiercer and Okja have their admirers (I am not among them), but it seems inarguable that all of his focus, his precision went into his Oscar-winner, which shows such command of character, place and economic class. That sense of familiarity, of knowledge, rings out on the screen.

Meanwhile, news comes that Pedro Almodóvar is set to make his first film in English, after a decades-long career of Spanish movies, and Palme d’Or winner Apichatpong Weerasethakul has Memoria, starring Tilda Swinton, in the can. The latter’s film seems less worrying – the Thai director’s languid dreaminess seems fairly unbound by language – but there’s some cause for apprehension about the former. Almodóvar’s films are unusually rooted in verbiage, in locality, in cultural specificity – these things can get washed away.

With globalisation comes a breaking down of barriers – directors can move around and plant their visions wherever they wish – but in auteur-driven cinema perhaps we lose some piquancy, a more pointed vision, a more heightened and individual outlook, when directors stray into different lands.