Screenwriting — a torturous act practiced in solitude while staring at a screen or typewriter, punctuated by a neurosis or two — is not an inherently cinegenic profession. Nonetheless, Hollywood has produced a catalog of movies that try to capture the trade, using a sprinkle of movie magic to transform the seemingly boring pursuit. Here’s a look at the latest, David Fincher’s “Mank”(now on Netflix), and seven other movies about the trade, and how they succeed at interpreting the writer’s experience.

The writer: Charlie Kaufman (Nicolas Cage) struggles to adapt “The Orchid Thief” by Susan Orlean in something of a love letter to the struggle of writer’s block.

How much we see him write: He continually reads his source material and dictates his bolts of inspiration into a recording device. He even makes multiple attempts at sitting at his typewriter, before giving up after 15 seconds.

Degree of neurosis: “I’m a walking cliché,” Kaufman tells himself at the beginning of the movie in a stream-of-consciousness purge of his negative thoughts and impostor syndrome that continues throughout the film.

Writerly moment: Charlie excuses himself from a party to go home to write, but instead flops down face first onto his bed because it’s easier. 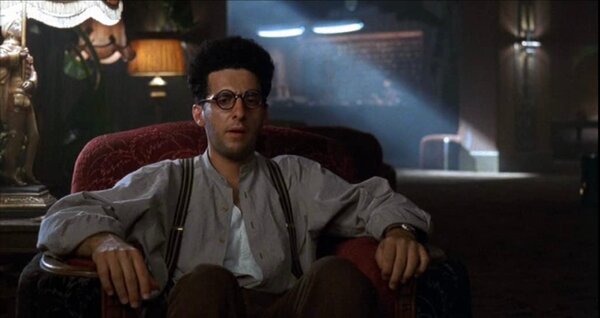 The writer: John Turturro stars as a playwright who is invited to Hollywood to write a wrestling movie. It proves to be more difficult than he anticipated.

How much we see him write: Despite spending much of the movie staring at an empty page, when Fink gets going on a beautiful Underwood typewriter, he tip-taps his way through a whole ream of blank paper.

Degree of neurosis: Fink is a cluster of writerly traits: Painfully awkward, lonely, eager for praise, quick to despair and driven by the idea that writing “comes from a great deal of pain.”

Writerly moment: Desperate for companionship, when asked about his writing by his neighbor at the hotel (John Goodman), Fink unspools an unprompted two-minute monologue about his literary ambitions. “I know sometimes I run on,” he apologizes.

The Writer: Dixon Steele (Humphrey Bogart), a struggling screenwriter, becomes a murder suspect when a woman who came to his apartment on business later turns up dead.

How much we see him write: You’d think being investigated for murder, while also falling in love with a neighbor (Gloria Grahame), would hinder productivity. Yet Steele writes an entire script in the course of the movie, a healthy amount of which we see him doing by hand on a legal pad.

Degree of neurosis: Anger management is a bigger concern for Steele, but there are small bursts of writerly insecurity, like when he jokes with someone, “One day I’ll surprise you and write something good.”

Writerly moment: After several all-nighters and days of writing, Steele assumes the official pose of his profession: exhausted, hunched over a writing instrument, elbow on a table, and hand on head as if trying to physically pull thoughts directly from his brain.

The Writer: Exiled to an isolated ranch to dry out and recuperate from a broken leg, Herman “Mank” Mankiewicz (Gary Oldman) sets out to write the screenplay for “Citizen Kane.”

How much we see him write: He occasionally dictates parts of “Citizen Kane” to an assistant (Lily Collins), but the film is more preoccupied with flashbacks of Mank’s past.

Degree of neurosis: Self-destructive alcoholism and gambling are combined with an eagerness to entertain that hints at a deep-seated lack of self-worth.

Writerly moment: Mank, on his recovery bed, surrounded by loose and crumpled pages, a tidy symbol of the not-so-tidy creative process.

The Writer: The Oscar-nominated Steven Phillips (Albert Brooks) is fired from his Hollywood studio contract for losing his creative edge. Desperate, he turns to a supposed muse (Sharon Stone) to get his career back on track.

How much we see him write: The closest we get is an aquarium visit that inspires an idea for a Jim Carrey movie, followed by a montage showing him furiously jotting down thoughts in a notebook.

Degree of neurosis: Phillips is a self-doubting mess (it is Albert Brooks), but who can blame him? Many writers tell themselves they’re bad and irrelevant, but Phillips is told that repeatedly by others.

Writerly moment: Phillips, asleep on his computer, meant to be writing, but choosing unconsciousness over creative hardship.

The Writer: Battling a screenplay and a drinking problem, Marty (Colin Farrell) gets pulled into the fallout from a dog kidnapping gone wrong, courtesy of his friend Billy (Sam Rockwell).

How much we see him write: A good amount of scribbling on yellow legal pads and in notebooks, along with some printing out of script pages. Marty also likes to write via verbal storytelling, creating character back stories that are visually dramatized for the audience.

Degree of neurosis: Marty is an almost alcoholic whom friends describe as suffering from “suicidal self-loathing” that only writing can cure — or perhaps cause.

Writerly moment: Whenever inspiration strikes, Marty scribbles with the frantic desperation of a writer afraid to lose a good idea.

How much we see him write: He works on short stories. He pitches a baseball movie to a producer. He annotates, edits and types Norma’s script about Salome. He even collaborates late at night — typing, proofreading, brainstorming — with his friend’s fiancé, Betty (Nancy Olson).

Degree of neurosis: Functionally self-doubting and prone to dismissing himself as “just a movie writer.”

Writerly moment: Sitting on a bed in a bathrobe, working on a typewriter while he questions his talent and creditors bang on his door.

The Writer: Lumir (Juliette Binoche), is a screenwriter who has brought her family from America to Paris to visit her mother, the renowned French actress Fabienne Dangeville (Catherine Deneuve).

How much we see her write: Aside from a call discussing changes to one of her screenplays, Lumir’s main output is scripting an apology for her mother to deliver to a slighted manager, and a few heartfelt lines for her daughter, Charlotte (Clémentine Grenier) to tell Fabienne.

Eccentricity level: Pretty levelheaded, although who’s to say whether her relationship with her difficult mother didn’t inspire unseen neuroses that led her to turn to pen and paper.

Writerly moment: Before Charlotte returns from her scripted chat with Fabienne, Lumir waits, reciting aloud the lines she wrote with the smile of someone pleased with her work.