David Fincher’s new Netflix drama “Mank” explores how Herman J. Mankiewicz came to co-write the celebrated screenplay for “Citizen Kane.” Why did he stick with it despite enormous pressure to drop the project? In the film’s telling, one of his primary motivations is the author Upton Sinclair’s race for governor of California in 1934, and how it was sabotaged by the MGM producer Irving Thalberg and the media baron William Randolph Hearst.

But how accurate is that plot point beyond the fact that Sinclair, a former Socialist, captured the Democratic primary in a landslide and appeared headed for victory that November, leading a mass movement? In the film, Mankiewicz (Gary Oldman) defends Sinclair five years before answering Welles’s call to write “Kane.” Mank refuses the MGM chief Louis B. Mayer’s order to hand over a donation to Sinclair’s Republican opponent. Then he tries to get Thalberg to kill the phony newsreels the producer had devised to destroy Sinclair.

It’s true that Mankiewicz played a key role in the 1934 campaign. That Mankiewicz, however, was not Herman but his brother, Joseph, also a screenwriter at MGM. There is no evidence that Herman took any stand for Sinclair, let alone a nearly heroic one, or even voted for him. His brother, on the other hand, wrote outrageous anti-Sinclair radio dramas, he admitted when I interviewed him for my book on the 1934 race, “The Campaign of the Century.”

There is a scene in “Mank” in which Herman and his wife hear a radio broadcast much like the ones his brother penned. An elderly woman, purportedly an average citizen, tells an interviewer that she fears for the future under the radical Sinclair. Herman informs his wife, “Why, that’s Maude Anderson,” an actress he knows, reading a script. But there’s no mention of his brother’s work against Sinclair in “Mank,” although he appears in several important scenes.

As for the anti-Sinclair exertions by Hearst: While it’s an effective narrative device in “Mank,” no one has ever suggested this played any role in Herman Mankiewicz’s decision to write “Citizen Kane” (with Welles) as a kind of payback. Yes, the monstrous Charles Foster Kane was surely based on Hearst. But there’s not a shred of proof that Hearst actually financed those phony newsreels, as “Mank” suggests in a key scene, nor that Mankiewicz objected. 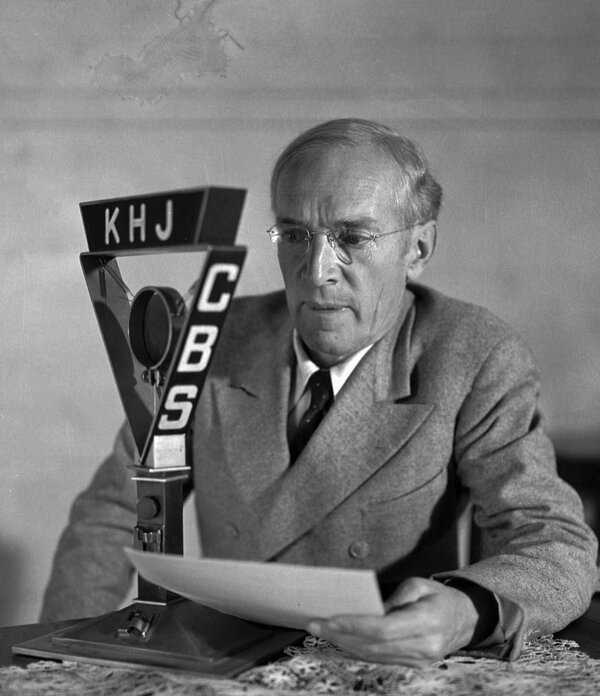 Hearst did play a crucial role against Sinclair in ordering his newspapers, including the Examiners in San Francisco and Los Angeles, to mock him every day in articles and cartoons. But The Los Angeles Times, barely mentioned in “Mank,” proved far more pivotal, even exceeding the Hearst papers in its creative malevolence.

On the other hand, the film’s portrait of MGM’s role in stopping Sinclair is, broadly speaking, fairly accurate. Studio employees, from drivers to stars, really were docked one day’s pay to be funneled to the Republican candidate, and only a few actors or writers refused, among them James Cagney. Some movie moguls did threaten to move their studios to Florida if Sinclair was elected. Mayer and Thalberg did celebrate Sinclair’s demise at the Trocadero nightclub on election night.

Other details are also based in fact. Thalberg was indeed an activist for the Socialist Party while growing up in New York City. Mankiewicz vehemently opposed the fledgling Screen Writers Guild. Sinclair did write a savage depiction of Hearst’s affair with Marion Davies (Amanda Seyfried), which is quoted word for word in “Mank.” And she did leave MGM when denied the chance to play Marie Antoinette in a major movie, but this happened after the phony newsreels hit the screen, not before (as the movie claims in a dramatic scene in which Mank begs her to intervene with Mayer to halt their release).

Just three years before the 1934 race, Thalberg purchased the rights to Sinclair’s novel “The Wet Parade.” The author used the money to help finance a film in Mexico. It was not, as the movie asserts, about the Russian Revolution, but rather crucial financing for the Sergei Eisenstein drama “Que Viva Mexico” (which ultimately wasn’t finished). Unmentioned in “Mank” is that a year later, Thalberg paid Sinclair another huge sum for an original film idea, but quickly killed it. No wonder: Sinclair had titled it “The Gold-Spangled Banner.”

Now, what about those phony newsreels — attack ads or “fake news,” as we might call them today?

They existed only as memories or press reports until I discovered them in an off-site MGM archive in Los Angeles in 1990 while researching “The Campaign of the Century.” Thalberg had ordered a film crew to shoot two “Inquiring Reporter” shorts with voters weighing in on the governor’s race. Many of the subjects, however, were bit actors from the studio reciting scripted comments. The more respectable characters supported Merriam or tagged Sinclair as a dangerous radical. Others, often poorly dressed, hailed Sinclair. One with a heavy accent asserted that Sinclair’s plans “vorked very vell in Russia” and surely could also “vork” in America.

“Mank” recreates this faithfully, but devotes less attention to the final, and most impactful, Thalberg newsreel. It showed boxcars filled with hobos flocking to California to take advantage of Sinclair’s promised utopia. Some of the scenes were staged or taken directly from obscure MGM movies.

The Fincher film shows Mankiewicz driven by guilt for accidentally giving Thalberg the idea for these newsreels when the writer reminded the producer that the studios were capable of creating their own reality — making audiences believe, for example, that their mechanical King Kong “is 10 stories tall.” Soon Thalberg assigns one of Mank’s pals, Shelly, a middle-aged cameraman, to direct the shorts. Shelly views this as the chance of a lifetime, but later recognizes that they were used to destroy a worthy candidate. After Sinclair blames them for his defeat, Shelly commits suicide.

This, of course, is almost pure fiction. The “Shelly” who actually directed the newsreels was Felix Feist Jr., just 24, who had shot film tests and short subjects at the studio but was desperate to direct features. A conservative, he probably never regretted creating the newsreels for Thalberg, especially since he went on to direct several B-movies in the 1940s and 1950s, and dozens of episodes for TV series.

One final note: Bill Nye — yes, “The Science Guy” — might seem like an unlikely choice to portray Sinclair. He doesn’t get Sinclair’s voice right, but his portrayal of the author-candidate is suitably combative and intelligent. Long before Nye filmed his one scene for Fincher, he posted one of Sinclair’s most famous quotes on his Facebook feed: “It is difficult to get a man to understand something when his salary depends upon his not understanding it.”