Margaret Nolan, a stage and screen actress whose gold-painted body was used as a canvas to project the opening credits of the James Bond film “Goldfinger” and who played the character Dink in the movie, died on Oct. 5 at her home in Belfast Park, London. She was 76.

The cause was cancer, said her son Oscar Deeks.

She also appeared in “A Hard Day’s Night” (1964), the musical comedy featuring the Beatles. And she played an uncredited role as “Grandfather’s Girl at Casino,” according to IMDb, the entertainment database.

But it was the opening title sequence of “Goldfinger” (1964), which was projected onto Ms. Nolan’s body as if it were a screen, that brought her fame.

“Squeezed into a gold leather bikini, her skin painted the same shimmering hue, the statuesque starlet Margaret Nolan (41-23-37) stood still while scenes from the just-finished James Bond movie ‘Goldfinger’ were projected onto her curves,” The New York Times reported in 2005 of the film shoot, which it also described as “long and meticulous.”

The movie’s title sequence went on to be a featured exhibition at the Museum of Modern Art in 2012-13.

In an archived version of her official website, Ms. Nolan described how she was “quite unexpectedly shot into the limelight” by the movie when she was only 20.

The filmmakers wanted her to be the body for the title sequence but she agreed to do it only if she were given a role in the movie. She ended up playing a masseuse named Dink who appears briefly with James Bond, played by Sean Connery.

Ms. Nolan’s character in “Goldfinger” was not to be confused with the character who is completely painted in gold and dies of “skin suffocation.” That character, Jill Masterson, was played by Shirley Eaton. (That scene also prompted false accounts that the actress had died during the filming as a result of the paint.) 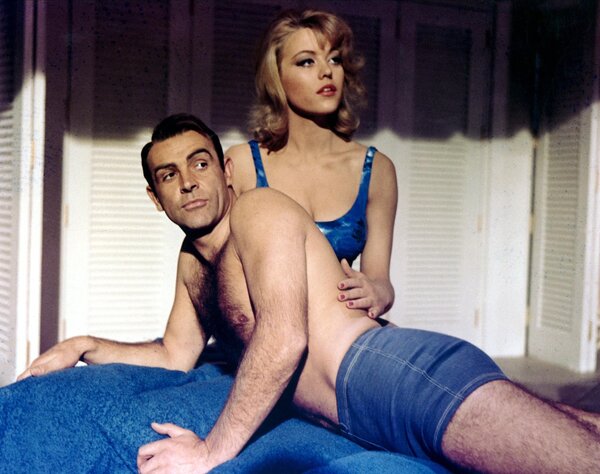 Ms. Nolan turned down a two-year contract to publicize the film because she said she would find it difficult to live down such attention and wanted to be taken seriously as an actress.

“As it transpired, I couldn’t ‘live it down’ anyway and to this day get regular fan mail from Bond fans!” she wrote.

Margaret Ann Nolan was born in Hampstead, London, on Oct. 29, 1943. Her father, Jack Nolan, was a clerk in the Army and her mother, Molly, was a psychiatric nurse. Her mother relocated the family to Waterford, Ireland, during World War II until it ended.

The family returned in 1946 to Hampstead and Ms. Nolan was training to be a teacher when she met her first husband, Tom Kempinski, who was then an actor with the National Theater.

“He convinced me that I could be an actress,” she wrote.

She gave up acting in the late 1980s to focus on homemaking and caring for her two sons. In the early 1990s she moved to Andalusia, Spain, where she took up drawing and painting.

Her marriage to Mr. Kempinski ended in divorce, as did a second marriage, to Mike O’Sullivan. In addition to her son, Ms. Nolan is survived by another son, Luke O’Sullivan, and a sister, Geraldine Ross.

She began making photomontages from some of her earlier portraits and had her work featured in exhibitions. She also became politically active in the Workers Revolutionary Party, Mr. Deeks said.

She developed a passion for permaculture, a movement coined in the mid-1970s as a portmanteau of permanent agriculture and permanent culture. At her farmhouse in Spain, she lived off the grid and relied on solar energy, Mr. Deeks said.

The director Edgar Wright said on Twitter that Ms. Nolan played a small role in his upcoming movie “Last Night in Soho.” He described her as being in the middle of a Venn diagram of “everything cool in the ’60s,” having appeared with the Beatles and in the Bond film.

She returned to the screen for “The Power of Three” (2011), a low-budget independent film that she described as a feel-good comedy that reinvents the myth of middle age.

In a 2012 interview with the site Playerist, she was asked if she wanted to escape glamour or to embrace and use it.

“I absolutely embraced it when I was able to, when I was glamorous,” she said. “You don’t go on embracing it — that is pathetic. It was just part of being young and beautiful.”