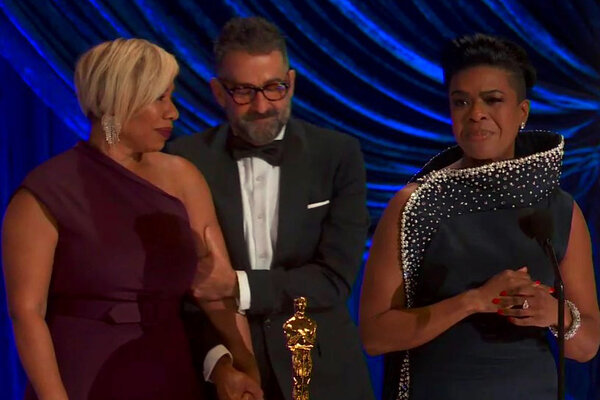 In what may shape up as a night of firsts, Mia Neal and Jamika Wilson became the first Black women to win an Oscar for best hair and makeup for their work on “Ma Rainey’s Black Bottom.”

“I want to say thank you to our ancestors who put the work in, were denied, but never gave up,” Neal said. “And I also stand here as Jamika and I break this glass ceiling with so much excitement for the future. Because I can picture Black trans women standing up here and Asian sisters and our Latina sisters and Indigenous women, and I know that one day it won’t be unusual or groundbreaking; it will just be normal.”

Neal and Wilson, who were honored for the film’s hairstyles (Sergio Lopez-Rivera was cited for the film’s makeup) were also the first Black women ever nominated in the category. The award was added in 1981 after the 1980 drama “The Elephant Man” was not recognized.

The film, adapted from August Wilson’s play and directed by George C. Wolfe, is set during a recording session in 1920s Chicago. It tells the story of Rainey, a pioneering blues singer played by Viola Davis, and her battle to protect her gift from exploitation by a white-owned record label. When Chadwick Boseman’s musician, an ambitious upstart named Levee, wants to play a song his way, a clash of egos ensues.

The film is “a powerful and pungent reminder of the necessity of art, of its sometimes terrible costs and of the preciousness of the people, living and dead, with whom we share it,” The New York Times co-chief film critic A.O. Scott wrote in his review.