During her second day ever on a film set, Jo Ellen Pellman came face to face with an irate Meryl Streep.

“You owe me a house!” Streep, a three-time Oscar winner snarled, eyes flashing, as she ripped off her blazer and lunged at the 24-year-old ingénue.

Pellman’s eyes widened. “I’m so sorry!” she said, holding up a hand in apology.

Pellman was playing Emma Nolan, a high school student in a close-minded Indiana town who wants to take her girlfriend to the prom in the Netflix adaptation of the musical “The Prom.” Like Emma, Pellman is a Midwesterner who identifies as queer. But unlike her character, the young actress grew up in a supportive environment that has affected how she views the film’s potential.

“For young people who identify as L.G.B.T.Q., I hope it can be a two-hour break from all that’s happening in the world,” she said. “Like, ‘It’s going to be OK, my people are out there.’”

Still, this is her first film role, it happens to be the lead, and her co-stars — including Streep, James Corden and Nicole Kidman as narcissistic Broadway actors who parachute in to help her character — are names she’s long looked up to.

Pellman projected complete confidence in the presence of the stars, Ryan Murphy, the film’s director, said. “She had no fear,” even though her experience until then had consisted of roles like Girl No. 2 in an episode of “The Marvelous Mrs. Maisel.”

Murphy, on the other hand, whose credits include “American Horror Story” and “Pose,” said, “I was so nervous the first time I directed Meryl Streep — I think I did four takes. I was trembling.” 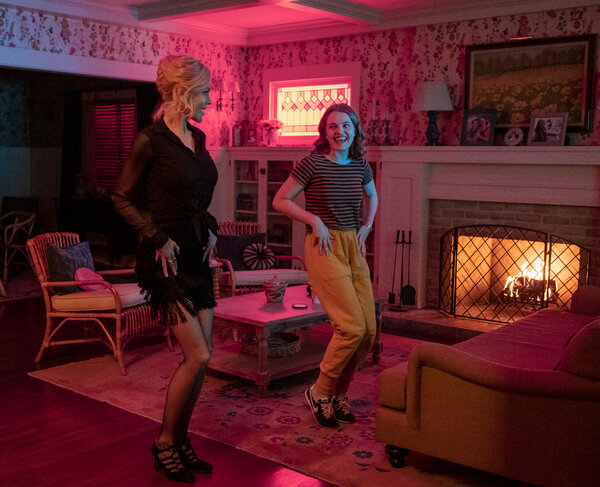 Pellman said she was hardly immune to Streep’s star power. “I love that that’s the way it came across,” she said, grinning during a Zoom interview last month from home in Cincinnati, where she’s been living with her mom since March. “Inside, I was like ‘OMG, that’s Meryl Streep!’”

It took Murphy all of one meeting to decide Pellman was his Emma.

“I watched her tape, and I knew,” he said. “She had that mixture of soul and spunk and spirit — and that amazing smile.”

Pellman, a recent graduate of the University of Michigan, was working three jobs while going to open calls in New York City, when she heard about the nationwide search to cast the role. “It felt like a long shot,” she said. But Pellman, as a queer woman herself, connected with Emma’s optimism and determination when she saw the play on Broadway with Caitlin Kinnunen in the part.

She didn’t know until shortly before her meeting with Murphy that Ariana DeBose, who plays Emma’s girlfriend, Alyssa Green, would be the only other actress there. “I saw Ariana’s name on the call sheet, and I freaked out because she’s someone I’ve looked up to my whole career,” she said.

But Murphy said that if Pellman was nervous, she didn’t let on. “As soon as Jo Ellen talked about her life, she didn’t even have to read,” he said. “She spoke very movingly about being a queer woman and having a gay single mom who raised her. I remember she walked out and I was just like, ‘Thank God, that’s over — we’ve found our girl.’”

Pellman was less sure. But she did get one hint at her interview. “He hugged us at the end of the audition,” she said. “When does that ever happen? A Ryan Murphy hug? That’s huge!”

When Murphy called the next day to tell Pellman she’d landed her dream role, she was perusing the coats at a thrift shop in Bushwick. The first person she called was her mother. Or, rather, tried to.

It was a rare absence for the woman Pellman credits with raising her in a supportive, L.G.B.T.Q.-affirming household — an experience that she’s grateful diverges from Emma’s. “When I came out my senior year of high school, it was no big deal,” she said. “I just blurted out one night while watching TV, “Mom, I think I’m queer.” And she was like, ‘That’s completely fine.’ She just wanted me to be happy.”

Pellman’s mother, whom she calls “pretty much the coolest person ever,” declined to be interviewed for this article. But she was an unseen presence during our November conversation, laughing at her daughter’s confession that she can speak fluent Ubbi Dubbi, the gibberish language popularized by the PBS program “Zoom,” and handing Pellman tissues when she choked up talking about an emotional moment in the film when Emma declares she has never felt so alone in her life.

Unlike Emma, Pellman was not an outcast growing up in Cincinnati, which is a far cry from Edgewater, Ind., the film’s fictional setting. She characterizes her high school as “pretty progressive.” Most of her close friends were gay, she said, adding, “I’m lucky because I was never bullied.”

It was that affirmation that she drew from in her portrayal of Emma as a forceful — if reluctant — leader who comes into her own over the course of the film. “It’s the best feeling in the world, knowing I can bring my authentic self to the role,” Pellman said. “And not just be accepted, but celebrated.”

“When she called to tell me she got the role, there was a certain rightness in the world,” Brent Wagner, who recently retired as chairman of the University of Michigan’s musical theater department, said. “Because if she’d hadn’t gotten it, she’d be out there fighting for the Emmas of the world.”

She and DeBose, a fellow queer woman whom Pellman calls “the one person who always knows exactly what I’m going through,” co-founded the Unruly Hearts Initiative to connect young L.G.B.T.Q. people with organizations that help provide housing, mental health services and mentorship.

That isn’t the only time she has shared her talents. In 2017, she traveled to India, conducting theater workshops in Mumbai with incarcerated women and victims of human trafficking.

Pellman proudly points out that this is not her first appearance in The New York Times — she was featured in a 2019 article about a fight to get a refund of the $1,200 she and her roommate had paid in dubious apartment application fees.

Despite the praise heaped on her recently — Kidman, in an email, referred to her “1940s movie star face”— Pellman has Selina Meyer’s mouth. “During the scene when I have all these dodge balls thrown at me by members of the crew, I got hit in the face really hard,” she said, and reflexively screamed an epithet back. “It was very funny. Everyone laughed.”

DeBose, 29, said Pellman was the person on set who brought people together — and that they talk on FaceTime regularly. “She’s Emma 2.0,” she said. “She’s great at cultivating community and is the person who rallied the troops.”

For her part, Pellman said she hopes the film speaks directly to young people who identify as L.G.B.T.Q. “I hope they’re like, ‘I’m worthy of a happy ending,’” she said.