Finally. Finally! After four months of being starved of the big-screen experience, four months of sitting at my desk watching films on my MacBook, four months of enduring a cowed miniaturisation of the cinema experience, four months of spilling mugs of tea over the keyboard and grumpily reloading the web link only to find the wifi has gone down and I’ve got the spinning wheel of death … I have the chance to see a film at the proper scale – at one of the new drive-in movie events that are popping up all over the country. And your car provides a natural bubble for social distancing.

This one was at Alexandra Palace in London, in the car park next to the ice rink, which usually hosts a slightly low-morale funfair in summer. I went on to the website and booked a ticket for the Pixar classic The Incredibles.

The thing is, I’ve never been to a drive-in before. Even when I was in my 20s, these impossibly glamorous US events were becoming rare. I associate them with hot summer nights, John Travolta with his arm around Olivia Newton-John in his cool roadster, a little speaker hooked over the driver-side window, and young people in shorts rollerskating up to the car with hot dogs and Coca-Cola. 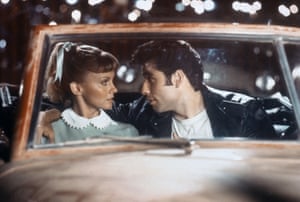 This isn’t exactly the vibe on a cloudy afternoon in London, where traffic marshals in hi-vis yellow tabards sternly direct cars to the correct entrance with windmilling arm movements. Still, I’m ready for the little speaker to be hooked to the side of the car so I can hear what’s being said on the screen. Someone in a hi-vis tabard leans over as we roll in: “To get the audio, tune to 87.7 on your FM dial.”

Wait! What? The radio appears to be entirely presets. I panic and frantically twiddle the dial past Magic FM, Classic FM, Radio 2, Radio 4, Classic FM again and back to Magic FM, while huge faces on the screen in front mouth all-but wordlessly. I fear this is going to be a silent movie performance accompanied by the sound of Carolyn Quinn on the PM programme. Then, sound and vision magically link up, just as – gloriously – the Pearl & Dean ads begin.

I had forgotten how much I’d missed this: not just the big screen, but the sound. With the windows open, it reverberates from car to car and a bank of speakers at the front creates the “house” effect of sound emanating from the screen. I’d missed the echo and the communal boom of the cinema. Obviously, the sound is not the same inside your car and, looking around at all the other vehicles, it is easy to think you could be at a car boot sale.

But it is still liberating and I quietly squeak with excitement as I select a Diet Coke and a giant pack of Maltesers from the snack delivery system accessed from a website on my smartphone, paid for online and delivered to my car within 10 minutes by a rollerskater in a mask. (Any problems with that, or anything else, and the protocol is to flash your hazard lights and not sound your horn and distract from the film.)

As well as the ads, an announcement reel is played that appears to be the genuine article from US drive-ins from the 50s and 60s. It tells “mom and pop” to go with their kids if they need to leave the car for any reason. This was a real homage to the “authentic” Eisenhower-era drive-in.

As for The Incredibles, it is as brilliant as I had remembered – and this is the first time I have seen it on the big screen since it came out in 2004 and blew me away. What a treat.

So why can’t drive-ins be a habit that we pick up from the lockdown? And if getting new films shown in this way is a problem, then why not reinvent the drive-in as the new frontier for cinephilia and make these events a showcase for classic movies, foreign movies, or little-known gems? Why not exploit empty spaces such as car parks like this all the time? As the Beach Boys put it: “Forget about the plot, it’ll do very well / But make sure you see enough so you’re prepared to tell / About the drive in / I love the drive in …”