Outlander was not Caitriona Balfe’s first role. She had roles in the movies Super 8 and Escape Plan before joining the Outlander cast. In fact, one of her first movies was The Devil Wears Prada, although you don’t see her face. Perhaps if she hadn’t quit after one day, she might have gotten some screen time.

Balfe was a guest on The Hollywood Reporter’s Awards Chatter podcast on Jan. 31 to discuss her role in the movie Belfast. When discussing her transition from modeling to acting, Balfe explained her role in The Devil Wears Prada, and why she quit. Outlander Season 6 returns March 6 on Starz.

Balfe said she had seen local productions growing up in Ireland. However, The Devil Wears Prada was a major Hollywood production, for better or worse. At the time, Balfe was a model in New York. 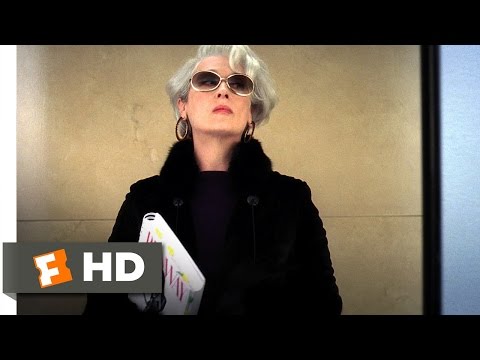 “The first day, it was one of the scenes where I think Meryl Streep is crossing in front of the building and her entrance going into the Vogue/Conde Nast building,” Balfe said on Awards Chatter. “I hadn’t been on a film set. I think I’d seen a set when I was in my youth, when I remember being around a film that was filming in our time. But I hadn’t really been on a film set.”

There’s a reason Hollywood has the expression “hurry up and wait.” There is a lot of downtime between shots. And that’s for the major stars like Meryl Streep. So imagine how long The Devil Wears Prada extras had to wait just to do basic busywork on screen.

“Just the length of time it was taking to do this one scene,” Balfe lamented. “We were stuck in a honeywagon, me and my two or three other friends that I was there on the job with, all day just waiting in this honeywagon. I was like, ‘This blows. This is terrible.’”

In the scene, you only see Balfe’s feet. So, she didn’t bother showing up after that.

“And then when we finally got called, it was literally to walk in front of a camera that was down on the ground, by the way,” Balfe said. “So it was literally just our feet. So I didn’t. I’m ashamed to say, I didn’t go back the next day.”

‘The Devil Wears Prada’ was looking for models

Since The Devil Wears Prada is set in the fashion world, the production cast New York models to fill the scenes at Runway magazine. Balfe leapt at the chance, but got disillusioned after day 1. Fortunately, she’d hone her discipline for tedious film shoots soon after. The Outlander cast endures much harsher conditions than a trailer in New York.

“I think they just came to modeling agencies and were like, ‘We need a bunch of women who can walk in heels,’” Balfe said. “My agency knew I wanted to act and they were sort of starting to, if people would come looking for stuff, they were sending me out to a few auditions. I obviously wasn’t very good because I didn’t get any of them. But yeah, I got booked, for some reason they called them the clackers which I guess is just the heels on the ground. You were basically a glorified extra. I was a clacker, there you go.”