I stan a pipsqueak.

What I mean to say is that I like Peter Parker in “Spider-Man: Far From Home” for the same reason I liked Miles Morales in “Into the Spider-Verse”: he’s a teenager. In pop-culture years, the web-slinger is pushing 60, but his most recent movie incarnations have emphasized his youth. Tom Holland, the British actor who has played Spider-Man since 2016, recently turned 23, but he still plausibly looks and sounds like a 16-year-old New York City high school student. This is as it should be.

The character’s perpetual youth is explained in the movie (or “in-universe,” as I guess we’re saying these days) by what happened in between the last two “Avengers” movies. You remember, right? No? I know, it’s been almost two months. Anyway, a lot of superheroes along with half of the living beings in the universe were vaporized by a purple-faced villain with a corrugated chin. This felt like a big deal at the time, but they were all brought back to life and the whole episode is now recalled as “the Blip.”

The opening scenes of “Far From Home,” directed by Jon Watts from a script by Chris McKenna and Erik Sommers, recap that reversible apocalypse in brisk comic style, from the standpoint of Peter and his fellow students at Midtown High School. Peter is still living in Queens with his Aunt May (Marisa Tomei) and still crushing hard on MJ (Zendaya). Everyone’s getting ready for the school trip to Europe. All’s right with the world until the next supervillain shows up.

Which happens, of course. I’ll refrain from saying too much about him, but the bad guy’s motives are the usual mix of megalomaniacal diabolism and semi-legitimate grievance, but his explanation of the grudge he holds against the superheroes of the world exposes the movie’s major problem, which is Tony Stark. 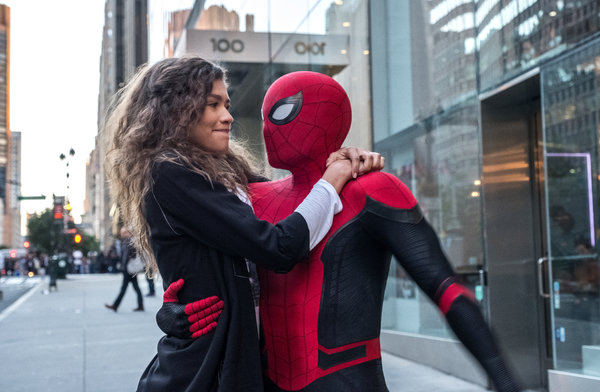 I know what you’re thinking: didn’t he die at the end of “Endgame”? Didn’t we all choke up when Happy (Jon Favreau, who shows up here to flirt with Aunt May) remembered how Tony liked cheeseburgers? Robert Downey Jr. is not in “Far From Home,” but his image pops up from time to time, and the Stark/Iron Man name and brand are invoked frequently. The scion of Stark Industries may be gone, but his cult of personality is stronger than ever.

Fair enough, I suppose. The Marvel Cinematic Universe as we know it — don’t we know it!— got rolling more than a decade ago with “Iron Man,” directed by Favreau. But because of various corporate intellectual-property issues, Spider-Man, licensed to Sony by Marvel, didn’t at first mix with the Avengers, who are Disney guys. Apparently it was part of the deal that Spidey would be Iron Man’s sidekick. For most of “Far From Home” he still wears the yoke of apprenticeship, speaking reverently about “Mr. Stark” and wondering if he could possibly fill the shoes (or the high-tech sunglasses) of such a remarkable visionary.

I thought we were starting to move past the breathless worship of narcissistic billionaire tech bros, but apparently not. Spidey’s nemesis used to work for Stark. His minions are a bunch of fellow ex-employees who complain about how Stark took credit for their work, ignored their best ideas and hogged the spotlight for himself.

What a bunch of losers. Everyone knows bosses are meant to be idolized, figureheads of aspiration rather than objects of envy. It’s a good thing that Happy is still around with the Stark private jet, various branded doodads and a mouthful of libertarian-plutocratic talking points.

Along with Nick Fury (Samuel L. Jackson) and Maria Hill (Cobie Smulders), Happy is on hand to reinforce the corporate grandiosity that is the “Avengers” hallmark. Jake Gyllenhaal saunters in to keep things interesting and keep would-be spoiler-mongers on their toes. As is often the case with these movies, a smaller, livelier entertainment is nested inside the roaring, clanking digital machinery. The filmmakers try to enliven the big fights and action sequences by injecting a bit of self-consciousness about the illusion-driven craft they pursue, and a few sequences take place in an austere, dreamlike virtual realm where visually interesting things are allowed to happen. For a little while, anyway.

The high-school comedy bits of “Far From Home,” while not especially original, have a sweet, affable charm. JB Smoove and Martin Starr are funny as the hapless teachers guiding a squad of teens through Venice, Prague and London. Jacob Batalon and Angourie Rice are delightful as Peter and MJ’s teen-movie best friends, who abruptly fall in love.

Will that happen for Peter, too? The freshest parts of the story revisit some of the character’s longest-standing issues, as Peter struggles with the competing demands of normal adolescence and superheroism. This isn’t just about the great responsibility that comes with great power, but about figuring out who or what you’re responsible for. Peter’s loyalty to his friends — a sweet, spirited crew embodying the tolerance, skepticism and earnestness that characterize their generation, as well as some of its less appealing aspects — is sometimes at odds with his vocation. You wish he could have some time off.

Of course that isn’t in the cards. “Spider-Man: Far From Home” ends with the usual mid- and post-credits kickers that are meant to be surprising but are really the opposite. Spoiler alert: there are a lot more movies like this coming. In the meantime, enjoy the Blip.

A.O. Scott is the co-chief film critic. He joined The Times in 2000 and has written for the Book Review and The New York Times Magazine. He is also the author of “Better Living Through Criticism.” @aoscott