Step right up, ladies and gentlemen and cine-revelers of every type, to the mesmerizing motion picture and humbly titled extravaganza, “Rolling Thunder Revue: A Bob Dylan Story by Martin Scorsese.” Thrill to Dylan, a troubadour with a white-smeared face and a peacock feather in his wide-brimmed hat, as he electrifies and sometimes confuses audiences with his melodious musings. Rejoice as Joan Baez sings and laughs and testifies about her old pal Bob. Gasp as Joni Mitchell warbles and strums her song “Coyote” in Gordon Lightfoot’s pad as Dylan plays along.

A lollapalooza of a tour, the Rolling Thunder Revue was divided into two parts across two years and began in 1975, the year after Dylan had returned to touring, headlining with the Band. (The Band’s farewell concert, with Dylan as a guest, is immortalized in Scorsese’s documentary “The Last Waltz.”) The idea for the revue (without the Band), explains the poet Allen Ginsberg while sitting beatifically in a lotus position on a beach — he’s called the Oracle of Delphi here — was to “showcase how beautiful” Dylan is through song and whatnot. In another scene, when Baez speaks about Ginsberg’s “yearning for Bob,” the poet’s optimistic take on the tour takes on a melancholic cast.

The idea behind Scorsese’s “Rolling Thunder Revue” feels equally diffuse. It’s at once a celebration and a rescue mission (it draws heavily on restored film footage), as well as another chapter in Scorsese’s decades-long chronicling of Dylan. The most recent entry in this enterprise was the 2005 documentary “No Direction Home,” a gorgeous ramble through the first half of the 1960s. By 1975, Dylan was back at Columbia Records, which released “Blood on the Tracks” that January. Only one of its songs, “A Simple Twist of Fate,” is in “Rolling Thunder Revue,” which includes many more from “Desire,” the album he finished before the tour started in Plymouth, Mass.

The story of the revue — and of “Renaldo and Clara,” the film Dylan was making during the tour — has been told before in journalistic bits and biographical pieces. In her memoir, Baez described what happened on stage as “a mad circus” (approvingly, it seems) but called Dylan’s film a “monumentally silly project.” She had a role in it as the Woman in White, who falls in love with a character played by Harry Dean Stanton. Baez didn’t know who was directing (“Bob would stand in the back of the camera and chuckle to himself”). But she understood the part she played perfectly: “Naturally, I was playing a Mexican whore — the Rolling Thunder women all played whores.”

That line (or thought) isn’t “Rolling Thunder Revue,” though certainly women assume various on- and offscreen roles, including Scarlet Rivera, who played violin in the revue and is billed as the Queen of Swords. There’s a nice scene of her riding in the back of a Rolls-Royce, a regal figure with flowing hair. Also woven in is a mythmaking account of how Dylan found her, but it’s her charisma that remains the undeniable fact about her, even if the chauffeur steals the scene when he describes how the revue’s audiences and players charge each other like batteries.

You see that charge now and then in the footage of applauding crowds, though it’s seen most poignantly in the post-concert tears on a young woman’s face. She’s blown away, and you know how she feels, particularly when Scorsese lets a song play in full, keeping the focus on Dylan, alone or with his band. Dylan doesn’t talk much in the offstage scenes, just here and there, hmm-mming and yeah-yeahing, like when Patti Smith talks about Rimbaud and Superman. You can tell from Smith’s look that Dylan is her superhero, one with flowers on his hat, his eyes bright and blazing in a face that is by turns open, guarded, painted white or obscured by a creepy translucent mask.

Dylan’s protean identity seem to have inspired Scorsese to fold fictional characters in “Rolling Thunder Revue,” including a supercilious director. Also onboard is Jim Gianopulos, the chairman and chief executive of Paramount Pictures, as a music promoter who fills in details (real or imagined) and calls the tour a disaster. Dylan, in a contemporary interview, says it was a disaster only if you care about money. There’s no indication who’s right or wrong, what’s true or false, though by the time Sharon Stone (“Casino”) starts reminiscing about Dylan and the band Kiss, you smell a rat.

Like the clip from the George Méliès’s 1896 film “The Vanishing Lady” that opens the “Rolling Thunder Revue,” these more-or-less amusing and distracting fictionalizations dovetail with Dylan’s myriad facades and associative thinking. The fictional character of Jack Tanner, the title subject of “Tanner ’88,” Robert Altman’s mock-doc mini-series, pops up here talking about Dylan and Jimmy Carter. Altman also directed “Nashville,” the 1975 film in which Ronee Blakley had a starring role. She was part of Dylan’s Revue, too, and shows up in the documentary as the Ingénue — and so it goes.

If you don’t hop on the documentary’s signifying train, it doesn’t really matter. Meaning gathers anyway in “Rolling Thunder Revue,” which picks up ideas with each stop and song. At one point, Dylan and Ginsberg take a break to visit the grave of Jack Kerouac in Lowell, Mass. There, they reminisce, and Ginsberg reads from Kerouac’s “Mexico City Blues,” which includes the following swirl:

Once I went to a movie
At midnight, 1940, Mice
and Men, the name of it,
The Red Block Boxcars
Rolling by (on the Screen)
Yessir
life
finally
gets
tired
of
living

Everything is in this scene: movies, life, death, friendship, the passing of trains, the passage of time.

“What attracts you, as a poet, to movies?” Ginsberg once asked Dylan. “To shift my consciousness somewhere,” Dylan said, “hopefully to a place that applies to my own personal experience.” It’s stirring how Dylan keeps coming back to film, with its beautiful masks and lies, and it is a gift that Scorsese has been there ready to meet him. Dylan was interested in how movies stop time, but he also told Ginsberg that he wanted “to be entertained,” adding, “If I see a movie that really moves me around I’m totally astounded.” To watch “Rolling Thunder Revue” is to understand what he meant. 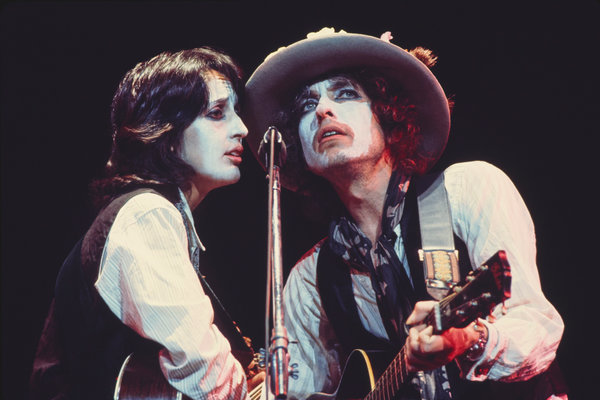 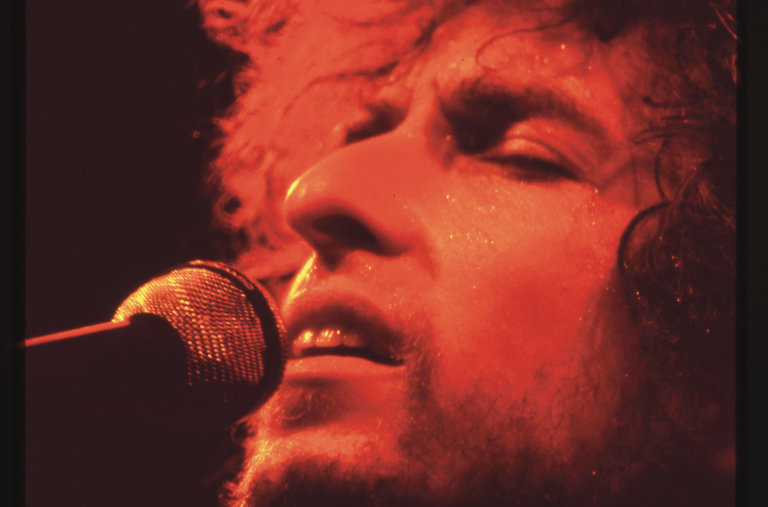