SAN FRANCISCO — This city is feeling under siege. It has always had its critics, but these days everyone — mea culpa, the national news media included — seems to be piling on.

Homeless sleeping on sidewalks, crack dealers near Twitter headquarters, billionaires and the destitute living uncomfortably blocks from each other.

When The Washington Post recently published a full-throated rant — the city has become “too homogeneous. Too expensive. Too tech. Too millennial. Too white. Too elite. Too bro” — a local public radio station, KQED, responded by asking residents to call in and proclaim what they love about the city.

The mayor, London Breed, began her State of the City address earlier this year lamenting that San Francisco was increasingly being portrayed as having streets that resemble “dangerous slums.”

“We have failed to build enough housing, we do face a homeless crisis and we grapple with mental health and substance abuse issues on our streets,” Breed told a sympathetic audience. “The question is, what do we do next, hang our head and give up, concede our problems are too great and the soul of our city is lost?”

Into this defensive crouch comes “The Last Black Man in San Francisco,” a film inspired by the childhood friendship between two San Francisco natives, the director, Joe Talbot, and lead actor, Jimmie Fails, who helped write the story the screenplay is based on.

The film, which won a directing award and a special jury prize at Sundance this year, is a work of ambivalence. As the title forcefully drives home, “The Last Black Man in San Francisco,” the debut film for both Fails and Talbot, is a lament for the exodus of black people from the city and the affordability crisis that is pushing out all but the rich. But it’s also a paean to San Francisco’s quirkiness, tolerance and beauty, and a celebration of the city’s multiethnic fabric.

Fails, 24, who is black, and Talbot, 28, who is white, capture these twin impulses in a scene the director says is often quoted back to him by early viewers. (The film is opening commercially June 7.)

Two new arrivals, hipsters, one with dyed hair, are overheard trashing San Francisco on a public bus. “I’ve been saying for months, let’s just move to East L.A.,” one of the women says to the other. “This city is dead.”

During the five years it took to make “The Last Black Man in San Francisco,” Fails and Talbot lived together in Talbot’s childhood home in the city. The director jokes that even though they were lucky enough to get Brad Pitt as an executive producer, San Francisco is so expensive these days that they still needed to live with parents. 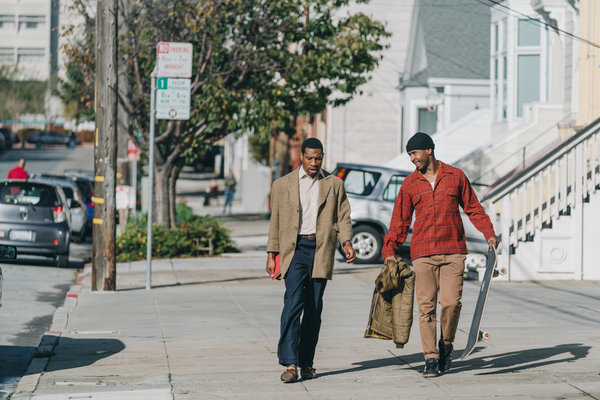 The film does not portray the clichéd San Francisco of the Golden Gate Bridge. With his friend Montgomery (Jonathan Majors) in tow, Jimmie tries to reclaim a home he says was once in his family. We follow Jimmie on his skateboard up and down the hills of the city, past Victorian homes and a naked man at a bus stop, a nod to the free-spirited side of the city that many now fear is being lost.

“We are both multigenerational San Franciscans,” Talbot said in an interview, “and I grew up on the stories of San Francisco in the ’60s. There’s something about the glory days of that period in San Francisco, this magical time when all these people came here looking for something.”

“They came here in a very different way than people are coming here now,” Talbot said.

Since the gold rush of the 1800s, waves of immigrants — Chinese, Irish, Japanese, Italian, African-American, Latin American and many more — have squeezed into the 47-square-mile piece of peninsula between the Pacific and the bay.

Fails said he did not begrudge the latest wave of migrants, the world’s technological elites who are well-paid and disproportionately male, and white or Asian.

“You can’t tell anyone where they can go with their money, or where they can move,” Fails said. “I don’t think you want to blame anything on anyone.”

The subtext of the film is what makes a city — the intangible, somewhat organic ingredients that give a place character and the economic dictates of who leaves and who gets to stay. And yet the movie’s focus on the African-American community in San Francisco is very much a story of loss and the pain of displacement.

A small number of African-Americans were among the pioneers who helped establish San Francisco, including William Alexander Leidesdorff, a merchant of mixed Danish and Caribbean ancestry who arrived before the gold rush and was one of the city’s early business magnates.

But the bulk of the black population in San Francisco arrived around World War II, many thousands working in shipyards around the bay.

Despite racist practices that kept black people out of some businesses and the wide income disparity between them and white people, the African-American community thrived, and with it a music and arts scene that came to be known as the Harlem of the West.

Numerically, census data show the black population reached its peak around half a century ago, when 13 percent of city residents were African-American. Today, only around 5 percent are.

The shrinking of San Francisco’s black population is part of a broader demographic shift that saw the percentage of Latino and Asian residents increase while the white population slipped from a majority to a plurality.

The film centers on a skinny, elegant Victorian house in what was the heart of the black community during the 1950s and 1960s, the Fillmore district. Fails said the home in the film resembles the house he lived in until he was around 6. The longing for the home — and for the family dinners that he remembers having inside it — preoccupied Fails for years and is a main driver of the film.

“The Last Black Man in San Francisco” is autobiographical to a point, Fails said. “Everything is emotionally true,” he said.

Many in the cast are not professional actors but friends of Fails and Talbot, who both still live in the city. One supporting actor, Jamal Trulove, was framed on murder charges, spent nearly seven years in prison, and received a multimillion-dollar settlement after his release.

On a recent morning I met Fails and Talbot at the top of a hill with an unobstructed, glorious view of the city. The neighborhood, Bernal Heights, is where the two met as teenagers and forged the friendship that led to the film.

It’s an eclectic area of mixed incomes and mixed ethnicities, somewhat artsy but, like most parts of San Francisco, now in full-blown transition. It’s near the entrance to a freeway that leads to Silicon Valley, and as we walked, Talbot pointed to a row of new homes occupied by tech workers.

Fails and Talbot reminisced about their early experimental film projects, the pickup football games they played in a nearby park, the way they used to race down hills on wheeled garbage cans. They had black friends and white, Pacific Islander and Latino. Fails said that without that diversity, and especially his friendship with Talbot, the film would never have been made. But now, as he watches the city evolve and become richer, he, like the character he plays in the film, feels a sense of loss.

“San Francisco feels like a woman that I love but who doesn’t love me back,” he said.

Thomas Fuller is the San Francisco bureau chief. He has spent the past two decades in postings abroad for The Times and the International Herald Tribune in Europe and, most recently, in Southeast Asia. @thomasfullerNYT • Facebook