In Simon Barrett’s film, something evil descends upon an all-girls boarding school after a clique of students try to contact the dead. 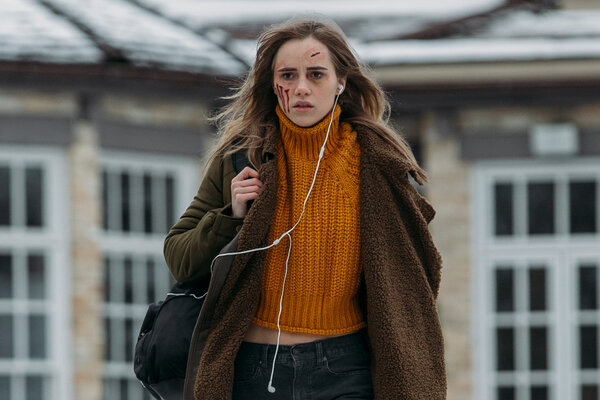 When a group of mean girls invite Camille (Suki Waterhouse), the protagonist of “Seance,” to contact a dead classmate, she shrugs.

“Why not?” Camille says. “Sounds weird.”

That is essentially the thesis of this genre-confused film: Why not? Sounds weird.

“Seance,” directed by Simon Barrett, takes place at the fictional Edelvine Academy, an all-girls boarding school where an evil presence emerges after a clique of students tries to summon a ghost. Newcomer Camille arrives just as girls are beginning to disappear.

Given Barrett’s career as a horror screenwriter — he penned the twisty “You’re Next” and contributed to the “V/H/S” series — it’s no surprise that “Seance” is at its strongest when leaning fully into the humor of the genre. As the film reaches its lively end, bloodshed and absurdity both peak. Barrett livens things up with practical effects and fight choreography.

Unfortunately, the film’s climax is at odds with its buildup, a plodding narrative constructed around flimsy characters with even flimsier motivations. “Seance” meanders for most of its running time, wavering between tones and styles. It’s both self-aware and overly serious. It tries to be a murder mystery, a slasher, a coming-of-age tale and a haunted house flick all at once.

When the film does choose a genre, it occasionally sticks the landing, but “Seance” ultimately feels jumbled. Myriad bizarre choices — like costuming the teen characters in form-fitting pajamas and haphazardly inserting music into scenes — don’t help.

Like its characters crafting a planchette out of lipstick and a phone case, “Seance” mashes ideas together and hopes for the best. But moments of true innovation can be found among the blunders.

Seance
Rated R for buckets of blood and un-ladylike language. Running time: 1 hour 32 minutes. In theaters and available to rent or buy on FandangoNow, Vudu and other streaming platforms and pay TV operators. Please consult the guidelines outlined by the Centers for Disease Control and Prevention before watching movies inside theaters.