Spoiler alert! The following post discusses key plot points in “Those Who Wish Me Dead” so beware if you haven’t seen it yet.

The filmmakers of her newest film don’t wish Angelina Jolie dead, though they certainly put her character through the wringer.

Director Taylor Sheridan’s wilderness thriller “Those Who Wish Me Dead” (now in theaters and streaming on HBO Max) features Jolie as a risk-taking Montana smokejumper grounded after being blamed for a tragically botched mission. She gets a second chance at saving folks, though, when a 12-year-old boy named Connor (Finn Little) needs her help to escape a couple of ruthless assassins (Aidan Gillen and Nicholas Hoult).

Review: Even with a game Angelina Jolie, ‘Those Who Wish Me Dead’ is a good-looking flameout

However, the redemption story takes a backseat to insane scenes Jolie’s character Hannah is put through, some of her own making – sure, they’re not quite Tom Cruise dangling off a plane in a “Mission: Impossible” movie, but still relatively nutty. Here are the five craziest scenes with Jolie in “Those Who Wish Me Dead”: Hannah (Angelina Jolie) is haunted by a firefighting mission gone terribly wrong in "Those Who Wish Me Dead." (Photo: EMERSON MILLER)

1. Angelina Jolie is surrounded by a dangerous blaze.

The movie starts off early with the incident that haunts Hannah in various flashbacks: A year earlier, Hannah jumps into a deadly wildfire situation that descends into chaos due to weather conditions, she panics and doesn’t know what to do, and the incident takes the lives of three young boys. Later on in the movie, she tells a friend that she read the wind wrong, though he thinks her bosses just wanted a fall woman. “I should have gone to them but instead I was a (expletive) coward,” she says. “And you’d be dead, too,” her pal responds.

Ethan (Jon Bernthal) has some words with Hannah (Angelina Jolie) after her parachute stunt in "Those Who Wish Me Dead." (Photo: WARNER BROS. PICTURES)

2. She parachutes off the back of a speeding truck.

Those nightmares lead to Hannah being quite the daytime daredevil, especially when booze is involved. While “self-medicating” at a welcome party for new smokejumpers, Hannah and her crew are told by her ex, sheriff’s deputy Ethan (Jon Bernthal), to “make good choices.” Well, that doesn’t happen. “I’m feeling naughty,” she says, so after a perfect cornhole throw, she straps on a parachute, hops into the flatbed of a pickup and goes flying down the road – literally, after she pulls the cord, Hannah goes airborne, spins in gnarly fashion and crashes in the forest. “I remember the landing being softer last time,” Hannah quips before Bernthal arrests her.

What to stream this weekend: Netflix’s ‘The Woman in the Window,’ ‘Those Who Wish Me Dead’

Hollywood A-lister Angelina Jolie stars in director Taylor Sheridan's "Those Who Wish Me Dead" – her first live-action film in six years. (May 7)

3. Jolie falls off a 60-foot-tall watchtower.

“Summer in a fire tower might do you some good,” Ethan tells Hannah when he lets her go. “Maybe I’ll just jump,” she retorts. It winds up being some foreshadowing: When Hannah’s hanging out in this “box on stilts,” a lightning storm arrives and hits the tower’s antenna. Seeing that it’s electrifying everything around her, Hannah grabs a rope andrappels down until the rope gives out and she falls halfway down, landing on her back. Hannah curses under her breath and dusts off, though her fights with nature aren’t over yet. (A later emergency exit off the tower with Connor goes much more gracefully.) 4. She gets struck by lightning. Kind of.

Hannah finds Connor and wants to help him avoid the hitmen chasing him as the storm is in full swing, and they have to cross a large clearing with bolts seemingly shooting straight at them (testing the movie’s already iffy believability). As Hannah’s running, she seems to get hit square by lightning. “It missed me,” a wobbly Hannah insists, though later when the adrenaline slows down she finds her hands, feet and back were singed. She bounces back, though, soon after giving Connor a lesson on starting a campfire to impress teenage girls. “Getting struck by lightning made you weird,” the kid says, with Hannah countering, “I was already weird.” 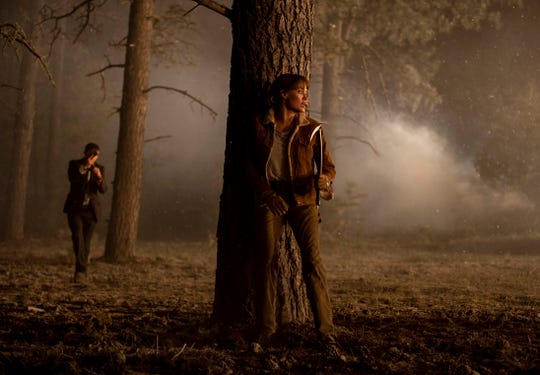 Hannah (Angelina Jolie) tries to avoid an incoming wildfire and an assassin (Nicholas Hoult) in "Those Who Wish Me Dead." (Photo: EMERSON MILLER)

5. Jolie is surrounded by another dangerous blaze.

Hannah’s reached full redemption mode when she and Connor face an incoming, speedily out-of-control wildfire (set by the bad guys, of course). With ash everywhere, an axe-wielding Hannah plays cat-and-mouse with gun-toting villain Patrick (Hoult), ultimately wounding him and deciding against a kill shot. “The fire will do it for me. You can (expletive) suffer,” Hannah tells him like a boss. Hannah and Connor then (somehow) outrun the destructive flames and find salvation in a lake, definitely earning hazard pay in the process.

If we’re gonna see Jolie cheat death, might as well be in bonkers fashion.