A gay teenagers’s fleeting romance goes off the rails in this coming-of-age story from the French director François Ozon. 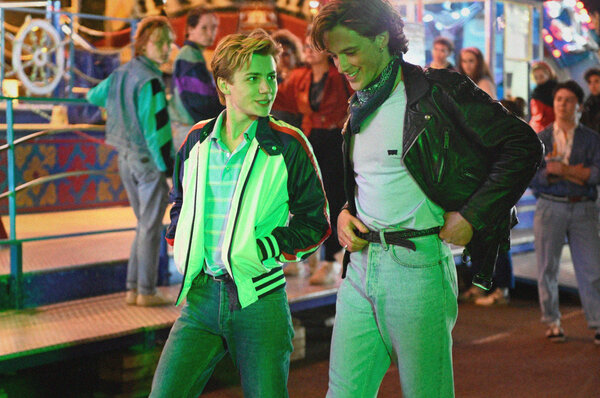 When the moody, baby-faced Alexis (Félix Lefebvre) capsizes while on a solo trek off the coast of Normandy, France, he looks up and sees lightning in the distance accompanied by a grinning, Adonis-like boy named David (Benjamin Voisin), his savior and the embodiment of the coming storm.

The two teenagers throw themselves into an intense friendship that quickly blossoms into a passionate affair filled with blissed-out motorbike rides on country roads, denim-padded embraces and stolen kisses between work shifts. Frothy pop tunes by ’80s bands like the Cure and Bananarama place Alexis’s sweltering coastal romance in the realm of starry-eyed nostalgia.

The prolific French director François Ozon wants “Summer of 85” to be more than a gay coming-of-age romance in the vein of “Call Me By Your Name.” With an elliptical narrative that jumps back and forth from Alexis’s summer fling to an unspecified future in which he is being interviewed by a suspicious caseworker about the death of David, the film also aims to be pulpy and provocative, teasing the idea that its lovesick protagonist turns homicidal with jealousy. It ultimately stumbles in this balancing act and loses sight of its emotional core, but its efforts remain compelling and delightfully bizarre.

Loosely adapted from Aidan Chambers’s young adult novel, “Dance on My Grave,” “Summer of 85” sees adolescent romance as outrageous and suffocating in its hormonal potency, yet also fleeting and illusory.

Less a character study than an exercise in genre, the film leaves Alexis’s working-class background and the nuances of his sexual awakening unconsidered and undeveloped. Scenes become increasingly bonkers as the film hurdles toward tragedy. For instance, David’s cool mom (Valeria Bruni Tedeschi) cracks after his death and turns into a resentful, wild-eyed psycho-biddy. Alexis teams up with a flirty British au pair who gives him a drag makeover and smuggles him into a morgue. Alexis’s glib narration of the scene unintentionally heightens the absurdity.

Yet unlike many recent L.G.B.T.Q. romances that deploy retrograde views on homosexuality as a convenient tool for conflict, “Summer of 85” uses its vibrant throwback aesthetic to situate two gay men in a cultural fantasy typically reserved for straight couples: the date at the carnival that ends in a fistfight with an embittered “ex,” the star-crossed lovers who sneak around and make morbid, lifelong pacts.

Toward the end of the film, reflecting on his time with David, Alexis realizes how he has become a character in a fantastic story — a story full of intrigue and drama, yes, but also one that is light and joyous. Too few queer characters, who are often saddled with tragedy, are so capable of moving on.

Summer of 85
Not rated. In French and English, with subtitles. Running time: 1 hour 30 minutes. In theaters.