By her own estimate, Taylour Paige has about 48 voices inside her, at the ready for any situation.

“I got an auntie voice, my educated, white-school voice, my high school,” she begins on a video call from Bulgaria, where she’s shooting “The Toxic Avenger.” Before she continues, one of those voices stops to clarify her statement. “When I say ‘white-educated,’ I’m not saying that being white is educated. I’m saying I went to a very white college. I was around a lot of white people, so that was a voice.” Then there was the voice observing her white friends doing wild things “where I’m like, ‘Oh, hell no. You white people are crazy.’”

Code-switching — or “assimilating and survival,” as the actress described it — came in handy throughout her portrayal of the title character in “Zola,” the director Janicza Bravo’s new dramedy. In the film, inspired by the real-life Zola’s viral tweet thread, Paige plays a stripper who quickly vibes with Stefani, a white stripper (Riley Keough) with cornrows and a blaccent.

But when Stefani whisks Zola to Florida to earn extra money dancing, things slip dangerously out of the latter’s control: there’s a sex-work scheme, an unhinged pimp (Colman Domingo) and other shady dealings. Zola navigates these increasingly chaotic circumstances while sharing her inner dialogue about how disturbing this all is.

“I think, ultimately, the tragedy in this film is there’s a betrayal,” the actress said, referring to how Zola’s so-called friend has set her up.

Paige, 30, is now known for her acting (her film credits include “Ma Rainey’s Black Bottom”) but growing up in Inglewood, Calif., she was a dancer under the tutelage of Debbie Allen, and later worked as a Los Angeles Laker Girl. She looks back on those years as a self-conscious young woman grappling with “generational self-loathing” with more compassion now. “Because I’ve given myself grace, I have a different availability to the roles that I always wanted. Before I was auditioning for my personality and auditioning for a role. So, everybody was lying.”

Paige talked about “Zola” and how it helped her tap into her true identity. These are edited excerpts from our conversation. 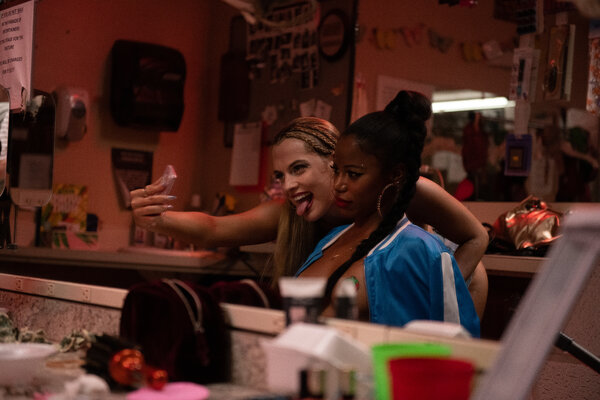 Since last year, you’ve appeared in several movies — “Ma Rainey’s Black Bottom,” “Boogie” and now “Zola.” How does it feel to be a bona fide movie star?

I’m still this human being trying to figure it out day by day. I’m trying to live my truth in my storytelling and in my life, my spirituality. There’s no stop and start to what I feel like I’m trying to learn as a human.

When I hear “breakthrough,” it is like, “OK, but what’s expected of me? What’s expected of Black women?” I just want to be a bridge for what happens when you stay focused and patient and kind and tell the truth.

Where does your spirituality come from?

I’ve always been a seeker and a philosopher and a deep thinker. Like, “What am I doing here?” Since I was 5, I was very much thinking about death and my existence. My mom had me at almost 40, so it’s a completely different generation and very much fear-based thought. My own insecurities were projected onto me from my mom’s own self-loathing. I just wish I was kinder to myself sooner and I was able to distinguish which voice was mine. Seeing the way my mom asserted herself and lived [affected] me in a good way and a bad way. Because I thought, “Time is ticking, and I have to figure this out.” I’ve changed that fear to “Time is eternal, but what are you going to do with it?”

Did playing Zola help you realize anything about how you previously moved around the world in your own body as a dancer?

I’ve been dancing since I was really little. I loved it. But I got to an age where there’s pressure and I was tired. I wanted to stop. But I had a scholarship. My mom wouldn’t let me. Your butt all of a sudden is growing and you’re going through puberty, and you need to be super skinny like everybody else.

Dance, as much as it was my escape from my home, would start to be something I resented. It started to feel like something I was doing for my mom or because some people thought I was good. I still was involved with Debbie Allen, but I stopped a little bit. With “Zola,” it’s like a return home to the innate ability of shaking that ass. It’s not so technical, so overthought. It’s like a Black girl getting down in her bedroom, but at a club. How do you get back to that without it needing to be perfect? I wanted to undo all that for her and for myself.

Did you have any reservations about how your body would be seen on the screen?

I was of course really nervous and scared. Zola is such a force and so comfortable and confident in her body, and I’ve been self-conscious but I have been ready to be like, “Enough with the self-hatred. I’m never going to be this age again. My body works, my heart beats without assistance, I got 10 fingers, 10 toes. I’m just over it.” So I use that.

That’s how Zola moved through the world. We’ve talked about how she’s been scared. But she does it anyway because she’s a Black woman and the bills got to be paid. Nobody’s going to do it for you. Also, Janicza was super protective from the jump. Like, “We’re not going to see your boobs.” I was like, “Hey, if it’s the right storytelling.” We show murders and violence on TV. I don’t know what the big hoorah is around boobs and our natural bodies.

It does fit into the film’s voyeurism. Zola engages viewers with pithy commentary as her shocking experience unfolds. What was it like telling this kind of story while inside of it?

Janicza was super clear that I’m the straight man. She treated this like a play or a comedy: there’s a straight man, and there’s a buffoon. Riley is like the minstrel in blackface. I’m observing it, so we don’t need two buffoons for us to be able to take in this type of atmosphere and react to it. You’re watching it through my eyes. So, a lot of my acting in the movie, my dialogue, is in my head.

I imagine it puts some pressure on you to convey the multiple layers of the story in a way that is tongue-in-cheek yet critical at the same time.

It was like, “Am I doing enough?” But I get that I’m serving Zola. I’m serving Black women. White women, Black women — it’s satirical, psychological. It’s the systems in place. It’s racism. It’s on a white body. But on a Black body, you don’t really believe her. Even when she’s being gentle and tender, you’re going to question if she’s telling the truth. We’re in service of the bigger truth, the way we as Black women go through the world and the [stuff] that’s put on us. That’s why I thought it was so brilliant, because it was protective of Zola’s voice. Zola isn’t some ghetto buffoon that just went on Twitter. She was very strategic and knew exactly what she was doing and saying.

“Zola” is also funny at times. Black women often use humor to protect ourselves, process things. Because of your own experiences, was it easy for you to embrace the comedic moments?

I find humor in the most mundane things. Most things, even when they’re bad, are pretty funny. Like, “Wow, life is outrageous. This is ghetto.” I have “Laugh” tattooed on my arm because, man, laugh often. When you’re laughing, you’re like, “I’m still alive, I’m still here.”