Catch these 10 titles before they leave Netflix in the United States by the end of February. (Dates indicate the final day a title is available.)

Adam McKay began his film career making broadly funny, crowd-pleasing Will Ferrell comedies like “Anchorman” and “Talladega Nights”; these days, he is known as the Oscar-winning writer and director of the sharp-edged sociopolitical studies “The Big Short” and “Vice.” This 2010 comedy was the unlikely hinge between those worlds. On its surface, “The Other Guys” is a sendup of buddy cop movies, with Ferrell and Mark Wahlberg as second-string New York police detectives. But McKay uses those spoof elements as cover, smuggling in a pointed indictment of the shenanigans that led to financial meltdown, culminating in an informative end credit sequence that now plays like a prologue to “The Big Short.”

Making a Western in the 21st century is a tricky bit of business: It’s a genre knotted up with leftover stereotypes and assumptions, and reckoning with the true legacy of that era, particularly with regard to the genocide of Native Americans, is a bigger job than most filmmakers are willing to accept. This 2017 effort from the writer and director Scott Cooper (“Crazy Heart”), on the other hand, deals with those issues head on, focusing on a cavalry officer (Christian Bale) who must put aside his bigotry when he’s forced to escort a dying Cheyenne chief (Wes Studi) back to his Montana home. Cooper refuses to romanticize the era or soft-pedal its brutality. It’s a blunt, difficult movie, but a rewarding one. 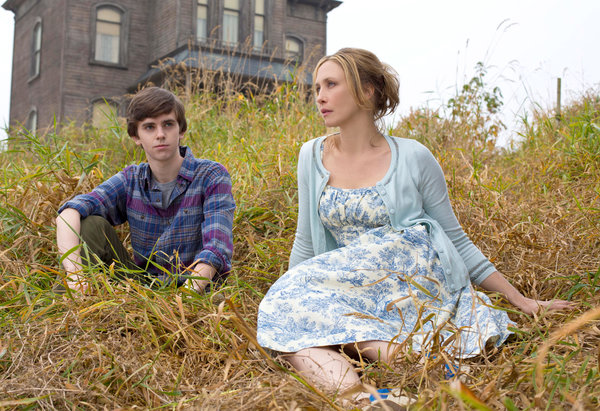 When A&E debuted this “Psycho” prequel series back in 2013, it sounded like a beating-a-dead-horse situation (especially since the franchise had already yielded three sequels, a TV movie and a remake). But the series quickly came into its own, supplementing its original exploration of the rich psychological dynamic between a young Norman Bates (Freddie Highmore) and his mother, Norma (Vera Farmiga), with expansive story lines about their family history and the town around them. Ultimately, however, the show works thanks to Highmore and Farmiga, who flesh out two of cinema’s most iconic characters into living, breathing, complicated people.

The runaway commercial success of this 1992 mystery would kick-start a yearslong cycle of erotic thrillers — steamy, provocative portraits of murderously attractive women and the reckless men who must have them. But few were put together with the kind of sleek style and sweaty sleaze created by the combustible combination of the director Paul Verhoeven and the writer Joe Eszterhas. Its most controversial elements haven’t aged well, yet it remains a case study in the specific skills required to make truly great trash. It also made Sharon Stone a star, and it’s not hard to see why; her work here is a pulse-quickening combination of noir femme fatale, icy Hitchcock blonde and unapologetic MTV-era sexuality.

Another Stone — Emma — also became a star, 18 years later, thanks to her work as a big-screen “bad girl,” although in this case, it’s all an act. The director Will Gluck’s clever riff on “The Scarlet Letter” features Stone as the splendidly named Olive Penderghast, whose entirely fictitious promiscuity turns her into a high school cause célèbre. Bert V. Royal’s screenplay asks properly pointed questions about gender roles and identity while providing juicy roles for a stellar supporting cast (including Lisa Kudrow, Thomas Haden Church, Malcolm McDowell and best of all, Patricia Clarkson and Stanley Tucci as Olive’s parents). But the main attraction remains Stone, who puts across the character’s intelligence, wit, self-awareness and self-doubt with charm and poignancy.

The actor Joel Edgerton (“Loving”) made his feature debut as a writer and director with this moody, unnerving 2015 psychological thriller. He also co-stars as Gordo Moseley, who tries a bit too hard to ingratiate himself into the life of a former high school classmate (Jason Bateman) and his wife (Rebecca Hall). Edgerton’s crisp screenplay deftly dramatizes the delicacy with which social norms and “good manners” can hide our deepest secrets, and he coaxes a disturbing turn out of Bateman, giving a pre-“Ozark” hint of the darkness lurking beneath his established persona of cheerful ironic detachment.

This 1990 gangster epic from Martin Scorsese seems to come and go from Netflix every couple of months, but it’s going again, so catch it while you can. Ray Liotta stars as the real-life wiseguy Henry Hill, a low-level grinder for a New York crime family whose high-spirited, backslapping life of crime descends into a paranoid nightmare of drugs and death. Robert De Niro is both affable and terrifying as Hill’s mentor, while Joe Pesci won an Oscar for his unforgettable role as a hot-tempered gunman with an itchy trigger finger. (He’s very funny, but don’t tell him that.)

Clint Eastwood directs and stars in this 2008 drama about a bitter and bigoted Korean War veteran who spends most of his days sitting on the porch of his Detroit home and growling at his Hmong neighbors — until he strikes up an unlikely friendship with young Thao (Bee Vang), and begins to understand the difficulties of Thao’s life. Much as his 1992 masterpiece “Unforgiven” complicated and re-contextualized Eastwood’s many Western films, “Gran Torino” subtly examines the casual racism of the actor’s police dramas, suggesting one of the most quietly daring ideas of his late filmography: that it’s never too late to change the limited ways we see the world.

Steven Soderbergh is known for many types of movies — indie character studies, Oscar-winning dramas, crowd-pleasing heist movies — but few thought of him as an action director until he built this vehicle for the mixed martial artist Gina Carano in 2012. Eschewing many of the more irritating techniques of contemporary action cinema (like cut-to-ribbons editing and overpowering music), “Haywire” is essentially a gender-flipped James Bond adventure, with Carano as a for-hire operative who gets burned by her employer (Ewan McGregor) and has to save her own skin. The results are sleek and action-packed, offering the distinct pleasure of watching Carano pick off an all-star cast (including Michael Douglas, Antonio Banderas, Channing Tatum and Michael Fassbender) one by one.

On the 25th anniversary of the 1992 Los Angeles uprising (following the acquittal of four white police officers who were caught on tape beating a Black motorist, Rodney King), the Oscar-winning documentarians Daniel Lindsay and T.J. Martin (“Undefeated”) assembled this harrowing ticktock of the protests, rioting and unrest of those days. Jettisoning such documentary standbys as contemporary retrospective interviews and “voice of God” narration, the filmmakers instead rely solely on archival footage from the time. The effect is shattering, creating a visceral immediacy that parachutes the viewer into that earthshaking moment, with no clear resolution in sight.