At the time, the fictional story of Facebook’s founding seemed overdramatic; now it underscores how our connections have changed, especially in the Covid era. 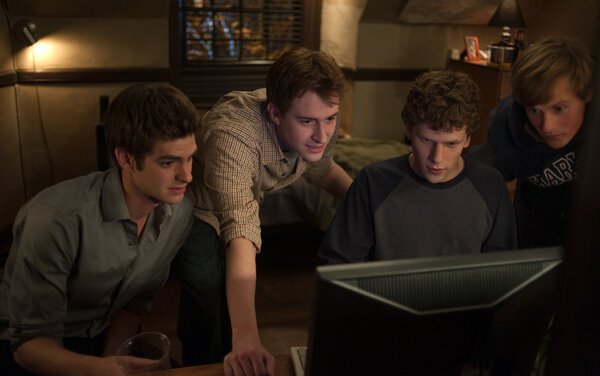 Ten years ago, the director David Fincher and screenwriter Aaron Sorkin gave us a deliciously scored origin myth to one of the defining online institutions of this generation — and the man (portrayed by Jesse Eisenberg as a fast-talking, sandal-wearing incel) behind it. Seen now, “The Social Network,” about the founding of Facebook and the lawsuits that followed, feels grimly prescient and perhaps representative of how the past few years since the movie premiered — and the past few months of the pandemic — have changed our relationship to social media and each other.

In 2010, “The Social Network,” with its egomaniacal antihero, seemed overdramatic, too pessimistic in the way it examined the birth of one of the biggest social media sites. Facebook was still in its infancy, far removed from what it would eventually become.

I was in college then and had my own Facebook account, which I made grudgingly — I was tired of missing party invites and notifications from friends. But then I was on constantly, tracking friends’ posts, looking for guys I liked. I had known Myspace in high school, and, despite my initial resistance, Facebook felt novel and cool (a quality that Mark Zuckerberg is obsessed with in the film); my peers spoke about it as the “new Myspace, but for college kids.” It ate up my free time.

In the movie (available on Netflix), there is a big celebration when Facebook reaches a million users. Now Facebook users number in the billions. And yet, for me and many friends who still use the site, it seems to highlight our isolation more than connection, and we’ve lost our trust in it.

Fincher’s film unknowingly pointed to how the site would manipulate personal data — Mark uses code to transcribe students’ information from one platform to his new one, without their consent — and how solitary it could actually make users feel. The social domain of the film, after all, is remarkably small; each character seems as isolated as Mark is. The Winklevoss twins, peers of Zuckerberg who sue him claiming that he stole their idea, are eerily depicted as though they’re one person, which is underscored by casting Armie Hammer in both roles. At one point, Tyler Winklevoss declares, “I’m 6-5, 220, and there’s two of me,” as though his twin were only a clone and not an independent being. The rich, coked-up Facebook investor Sean Parker (Justin Timberlake) seems to show up, as though summoned, wherever there’s a party, but he’s also too paranoid to trust anyone. And finally there’s Eduardo Saverin (Andrew Garfield), Facebook’s chief financial officer and the sympathetic foil to Mark. Near the end of the movie, he sits across from Mark, flanked by lawyers in a boardroom, and tells him, “I was your only friend. You had one friend.”

And consider, too, the language of social media, which uses terms of intimacy and familiarity to create the illusion of human connection despite the artifice of the medium. You “friend” someone and “like” them. You express your enthusiasm for a post by clicking a tiny red heart. But the dialect of connection is manipulated into a kind of capital: How many “likes” did you get? How many “friends” do you have?

Though many do use social media for connections, to talk to faraway friends or family members, to keep in touch with acquaintances, in the past decade Facebook has proved that it’s not simply the innocent model of social connection that the real Zuckerberg has made it out to be. “The Social Network” accurately emphasized the platform as an enterprise — something to buy into, and in real life it has become a medium known for invasions of privacy and the dissemination of false information, hate speech and propaganda.

(The new Netflix documentary “The Social Dilemma” delves into the unethical practices of social media companies that collect our information, hold our attention and influence us — the products we buy, the perspectives we value — in the interest of ultimately making a profit. Even the name of Fincher’s film gestures at the professional, impersonal connotation of these systems.)

When the coronavirus hit, we were all forced to our separate rooms like children in time out, and the world seemed to pause. Time dragged as people had to separate themselves from their loved ones. Social media, of course, carried on as ever.

In those first weeks, on Facebook, on which I’ve only posted sporadically for the last several years, I fell into rabbit holes looking up old friends. Each time I was left dissatisfied. Somehow, when our real social structures ceased to continue, our artificial ones — Facebook, Twitter, Instagram — weren’t able to become a suitable substitute.

But it continues to feel like a necessary evil. By the time “The Social Network” hit theaters, I had deleted my account a handful of times before ultimately resigning myself to keeping it. It was too late for me to fight it; I felt that I needed Facebook to maintain my social and professional lives. And yet, now every time I log on, I see the veil: I step into an artificial space with its own language, intangible and empty.

At the end of the movie, Mark sits alone in the boardroom after a long day of lawyers and questions. He finds his ex’s profile and tries to friend her, refreshing the page over and over again. He built a whole social media empire from his bitterness after their breakup, thinking that he was owed this relationship, this affection. But the very site he created for people to connect leaves him feeling even more disconnected — from her, from his friends and from everyone else.

In 2020, as the world shut down, we’ve learned all the ways we can define distance, and social media — as one cynical film predicted — is one of them.