Ideological disagreements sever a hamlet in this breakneck horror comedy. Also, there is probably a werewolf. 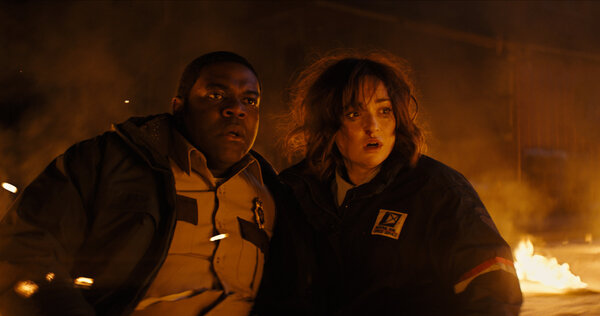 Horror villains have always shouldered a lot of cultural baggage, but there have been attempts to reclaim monstrosity on film, particularly in the last few decades of low-budget cinema. “Ginger Snaps” famously linked lycanthropy and menstruation, “Raw” turned carnal desire into cannibalism and “A Girl Walks Home Alone at Night” offered a female vampire vigilante. “Werewolves Within,” a horror comedy from the director Josh Ruben, comes so close to operating on this level — before it makes a beeline for the status quo.

The film, written by Mishna Wolff and based very loosely on the video game of the same name, unfolds in the northeastern hamlet of Beaverfield, home to scores of maple trees and nine cartoonish citizens. With Midland Gas promising residents a huge payoff — but only if all of them make way for a pipeline — tensions are high. Enter Finn Wheeler (Sam Richardson), a park ranger assigned to oversee Midland’s efforts. Finn is a chronic pushover, but Beaverfield’s insanity quickly puts his patience to the test. Especially after the killings start.

“Werewolves Within” darts between sharp visual gags, intricately choreographed scenes and a few standout performances, but its climax lands with a thud. The film’s ultimate villain is not human depravity, as the title suggests. It is a lazily-drawn scapegoat covered in fur. “Werewolves Within” could interrogate sexism, classism or America’s increasingly divided politics, among other things. Instead, this overstuffed script drips with blink-and-you’ll-miss-them jokes that lampoon everything and challenge nothing, least of all monstrosity itself.