Friendly exes? Or not so much? Brian Austin Green is lifting the lid on his relationship with his ex-wife and the mother of three of his children, Megan Fox, amid the actor’s very public romance with Machine Gun Kelly.

Green and Fox have a rocky history, including more than one breakup and make up. The two first met on the set of “Hope & Faith” all the way back in 2004, and it was actually an 18-year-old Fox who had her eye on the star, with him being a little more hesitant to getting into a relationship. “I met Megan on [“Hope & Faith”], and she was really young,” he recalled during a 2019 interview with KFC Radio. Green noted that the “Transformers” star “was just really persistent” and so they eventually got together.

The twosome got engaged in 2006, but called things off in 2009. That wasn’t the end though, as they secretly got back together and tied the knot the following year (per TMZ). They went on to welcome two children together, but called it quits in 2015 when Fox filed for divorce. They were back on again in 2016 though, confirming their reconciliation and announcing they were expecting their third child together (via People).

However, they separated again in November 2019 and Fox filed for divorce for a second time in November 2020 (via E! News), six months after Daily Mail reported she was dating Machine Gun Kelly. But where do Fox and Green really stand today? 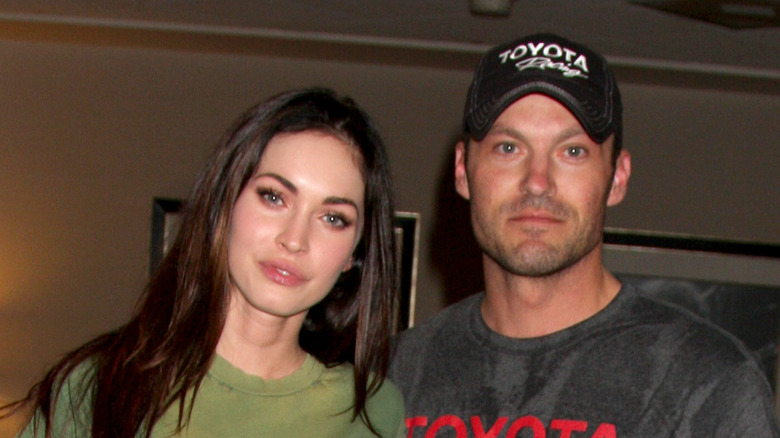 Brian Austin Green got very candid about his relationship with his ex-wife, Megan Fox, in a post to his Instagram Story on July 7. Green wrote (via People), “For people that need or want clarification, Megan and I get along great. Neither of us are sending petty digs to each other. We both work really hard to get along and co-parent well for our kids. Now, stay safe and spread kindness and love.”

The post appeared to be inspired by Green professing his love for his girlfriend, “Dancing with the Stars” pro Sharna Burgess, just a few hours before his clarification. The former “Beverly Hills, 90210” star posted a photo to his Instagram grid that showed the two sharing a kiss while at Walt Disney World’s Animal Kingdom.

Fans were quick to accuse the star of throwing shade at his ex in his caption, where he wrote, “It’s been a really long time since I’ve been with someone I can truly share life with,” alongside a red heart.

Fox responded with a message that fans aren’t too sure was genuine or a bit of a dig. Per Comments By Celebs, she wrote, “Grateful for Sharna,” though the message has been deleted.

Green and Burgess were first linked in late 2019 and the former told KTLA in January that they really had time to “connect” by being in the early stages of their relationship when the coronavirus pandemic took over.