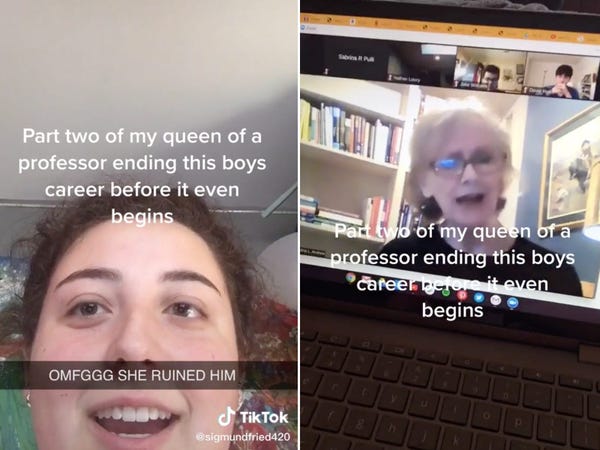 TikTok users are heralding a college professor as an "icon" after she shut down a disrespectful student in a viral video.

Sabrina Pulli, a student at Temple University, posted two videos from what she said was her human sexuality class — in which professor Mylina Andrew took on the misogynistic comments posted in the virtual class's Zoom chat.

In the first video, Andrew addressed the course's "class clown" who, according to Pulli, previously made offensive comments about women's bodies and followed up his comments with the assertion that he could say "whatever [he] wanted."

"So let me start out with the one comment, Omar, and I wanna make sure you're still there and hearing me," Andrew can be heard saying in the clip. "You said, and I quote, 'I can say whatever I want and I don't give a f— how you feel.' Well, guess what, Omar? You cannot say whatever you want in this classroom, and I do give a f—."

The clip racked up over 700,000 views and over 1,000 comments from impressed viewers, who Pulli has dubbed the "Mylina Hive."

"I knew it was good when she said 'and I quote,'" one commenter joked.

"SHE DID NOT SKIP A BEAT," another wrote.

In Pulli's second video, the professor of human sexuality went on to address the student's comments about women's temperaments and sexuality

"Let me make it perfectly clear to you that women do not 'thrive on d—.' It just doesn't work that way," Andrew can be heard saying to the student, seemingly quoting his prior comments. "I happen to be older than any of you and have a whole lot more experience sexually than anyone in this class, and I can tell you that I can live without penis."

"I can have a really happy life, if that be the case," she continued. "But to say that a woman is being irritated — or whatever the insinuation was — because she's 'not getting enough d—' is misogynistic."

Pulli, like many of her classmates who can be seen reacting to the professor's rebuttal, was impressed.

"Part two of my queen of a professor ending this boy's career before it even begins," the university freshman captioned the clip.

The video went viral almost immediately, racking up over 7 million views and 24,000 comments in just one day — and Andrew has seemingly developed a TikTok fanbase.

"WHAT'S HER CASHAPP?" one commenter asked.

"She isn't your professor anymore, she's ours," another wrote.

"Misogyny has NO place here," the verified TikTok account for the dating app Bumble commented.

According to The Temple News, the school's editorially independent weekly newspaper, Andrew has been teaching the university's human sexuality class since 2009 and has become involved with on-campus groups dedicated to preventing domestic violence and sexual assault.

Her aim in the classroom, she told the publication back in 2014, is to encourage students to keep an open mind and having a thorough understanding of human anatomy.

"I just have that comfortable attitude about [sex]," Andrew said. "I put great emphasis on what I think students – what everybody – will have to know in their lifetime."