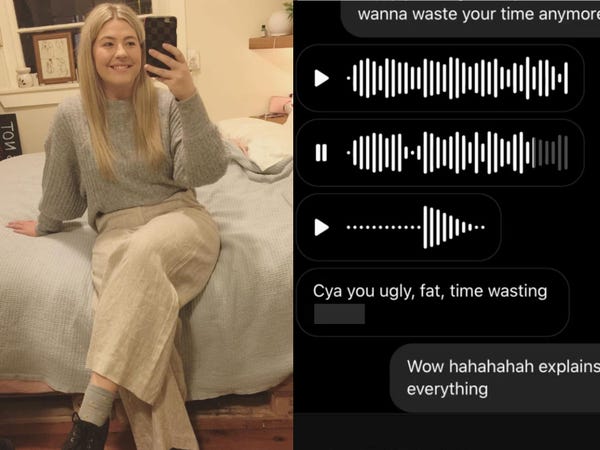 A software engineer from Australia was fired last week after two women made public the abusive and misogynistic messages they said he sent to them on dating apps and social media platforms, The Daily Mail reported.

26-year-old Ebonie Sanderson matched with "Tom" on Tinder, and the two began exchanging messages. The man repeatedly insisted that Sanderson come to his home, but she says she declined his requests. After articulating that she did not wish to waste his time, Sanderson received several cruel messages on multiple social media platforms — so she decided to speak out on Instagram.

"This is what happens when you say NO or call a man out for being disrespectful," she wrote in a post. "You apparently earn yourself the right to get verbally abused and fat shamed on more than one platform."

Sanderson went on to share videos of Tom's voice messages on the app, in which he can be heard calling her a "fat f—ing pig" and "f—ing ugly." She also shared screenshots of a Snapchat conversation where Tom said Sanders was "below him" and "inferior."

The situation, she said, highlighted a larger problem.

"The worst part about this attack, is the fact that I felt the need to be nice when turning him down, telling him he's good looking and will find someone else for the night and then apologising for feeling uncomfortable!!!!" she wrote. "THAT IS A BIG PROBLEM."

⚠️ WARNING: CYBER BULLYING, HARASSMENT, SEXISM, FATPHOBIA AND MISOGYNISTIC BEHAVIOUR ALERT!!! ***UPDATE UPDATE UPDATE 1. An email from Tom’s CEO has been received confirming that he has been fired, effective immediately. The CEO did the right thing and acted quickly, so I kindly ask you to stop emailing them. ***2. WARNING there are now well over 20 women that have come forward and shared their similar experience/encounters of abuse and harassment from Tom. My dm’s are a safe place if this is also you. This is what happens when you say NO or call out a man for being disrespectful!!! You apparently earn yourself the right to get verbally abused and fat shamed on more than one platform. No I didn’t “ask for it” and yes, I’m entitled to change my mind and tell someone I’m not interested anymore because I feel uncomfortable and intimidated by ones aggressive and forceful nature. The worst part about this attack, is the fact that I felt the need to be nice when turning him down, telling him he’s good looking and will find someone else for the night and then apologising for feeling uncomfortable!!!! THAT IS A BIG PROBLEM If anyone comes across this man on dating apps or social media, please report him. I managed to video call and he answered and appeared to in fact be this very man in the picture… “Tom”. All I can say is what a privileged misogynistic PIG. I will never change my weight for anyone else but MYSELF!!!

Sanderson's photos and videos sparked outrage in the comments section from viewers who called her Tinder match's behavior "horrendous" and "evil."

Ford also posted the man's Instagram handle — which identified him as a 28-year-old software engineer from Bondi named Thomas McGuirk — and encouraged Instagram users to avoid engaging with him on any platform. The Instagram profile has since been deleted.

After Sanderson's story made headlines in Australia, several other women came forward to share similar experiences with the man

The brewery manager wrote in a post that she had matched with McGuirk on Tinder a month prior. Ultimately, she said, she felt that the two didn't have chemistry.

She said his response to the rejection, however, quickly turned cruel.

In several messages that Hinds shared online, McGuirk shamed Hinds for her sexual history and appeared to threaten to show up at her place of business.

"I feel absolutely horrific and violated I never did anything," she wrote. "He was nice, until told no."

⭐⭐TW: ASSAULT AND TINDER CREEP…. EDIT: Here is the link to the article by daily mail https://www.dailymail.co.uk/news/article-8776897/Tinder-creep-called-woman-fat-pig-rejected-outed-abusing-manager.html So most of you have probably seen the daily mail post. I met this guy on tinder A month ago. And when I said we don't have chemistry, this is what happened. 2020, and men like this still are around and get to walk free. This is disgusting and horrendous behaviour. I feel absolutely horrific and violated I ever did anything. He was nice, until told no. Since I posted about this I've had 3 girls come forward and tell me they had similar. In London, as well as Sydney. So he has been everywhere. How has tinder not stopped Tom yet!? It's time to put an end to this misogynistic bullshit. #feminist #assult #tindercreep #disgusting #tommcguirk #tom

Since posting photos of the interactions to Instagram, Hinds wrote in an updated caption that three other women came forward to share a similar experience with McGuirk. She said he'd sent disturbing messages to women "all over" the world, with women coming forward in London, England, and Sydney, Australia.

"It's time to put an end to this misogynistic bull—-," she concluded.

A spokesperson for Tinder told Insider that McGuirks's profile had been reported and removed for violating the platform's terms of service.

In an updated caption of her Instagram post, Sanderson informed followers that McGuirk had been fired by Invenco Ltd, a company specializing in e-commerce and logistics. The company, she said, had "acted quickly."

In a statement to News.com.au, a spokesperson for Invenco said that McGuirk had been terminated and that there was "no place in our workplace for someone who treats women with that amount of disrespect."

Invenco CEO Dave Scott addressed the situation in a Facebook post, writing, "I was shocked and disgusted to hear the disrespect and entitlement towards women appear in the recordings and messages attached to the Instagram post."

After days of backlash, McGuirk apologized for his conduct

"I didn't mean the things I said, I was acting out in an impulsive way because I was hurt and I do recognize it," McGuirk told News.com.au. "It was absolutely inappropriate behavior and I'm really disappointed in myself."

The 28-year-old also told the outlet that he "struggles with rejection," and his response came from a place of anger and hurt.

"There's no excuse for it, I have been brought up with good values and I am so distraught that I let my ego get the better of me," he said.

The public outcry and resultant embarrassment, McGuirk explained, had been a wake-up call, and he plans to quit social media and says he will be seeking professional help to facilitate strong and healthy relationships.