How distant the mid-1970s seem now. They were unkempt, hairy, hedonistic, improvisational, analogue, inefficient — anything but neatly calculated and Instagram-ready. Post-psychedelic and pre-AIDS, they were a continuation of the idealistic, natural 1960s, yet they were also an immediate precursor to the polymorphous, synthetic, role-playing disco era. The bitterness of Vietnam and Watergate lingered; hippie utopianism was giving way to a more selfish search for individual satisfaction. Things were still scruffy, but not quite so communal.

The Rolling Thunder Revue, concocted by Bob Dylan, was precisely a manifestation of its era. Starting in Plymouth, Massachusetts, where the colonial Pilgrims landed, it wandered the northeastern United States and Canada from autumn into winter of 1975: a brief peregrination. In Dylan's public career, which is now well into its sixth decade, it stands as his most peculiar tour of all.

Two new projects revisit the tour in extensive detail. The Rolling Thunder Revue: The 1975 Live Recordings is a 14-CD, 148-track, box set of music from the tour's rehearsals and performances, vastly expanding the two dozen songs released on a 2002 collection, The Bootleg Series Volume 5: Bob Dylan Live 1975, The Rolling Thunder Revue. And this month, Netflix premiered Rolling Thunder Revue: A Bob Dylan Story by Martin Scorsese. It's a not-quite-documentary that mixes 1975 tour footage (which was shot for the 1978 film Renaldo and Clara) and latter-day interviews with Dylan, Joan Baez and other Rolling Thunder participants, along with some fictional characters. 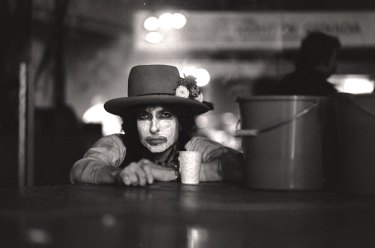 Both the box set and the film sprawl proudly and unpredictably, just as the Revue itself did. And both projects traffic in revelation and put-on, sometimes simultaneously. Onstage in 1975, introducing a then-new song called Isis that traces improbable adventures, Dylan claimed, "This is a true story. Actually, they're all true."

The Revue's initial plan was to play spur-of-the-moment, out-of-the-way bookings and shows at small halls that were announced on short notice, with printed flyers and radio ads: no internet then. (For a second, more conventional tour in 1976, the Revue outgrew that approach; both the box set and film stick to the initial Revue.) The concerts themselves rambled through their multiperformer bills, often stretching to three or four hours, taking on local guests at whim.

Someday there ought to be a reissue of a full-length, single-night Rolling Thunder Revue concert recording, opening acts and all. The new box is not that. It collects only Dylan's own appearances — rehearsals, five professionally recorded shows and a final disc of rarities and outliers, like the piano-pounding Simple Twist of Fate recorded in Falmouth, Massachusetts. 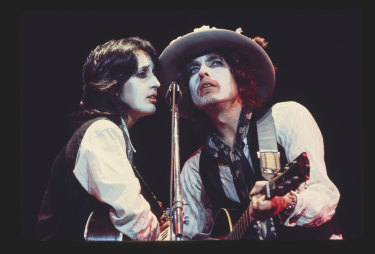 The Revue presented itself as an informal hootenanny, but it was a self-conscious one. With a film crew in tow, the shows were also intended to provide material for the amorphous Renaldo and Clara, a film that ran nearly four hours when it was released in 1978 and met with near-universal derision. With a script credited to Dylan and playwright Sam Shepard, Renaldo and Clara jumbled documentary and staged scenes, and it scrambled identities; Dylan is billed as Renaldo while rockabilly singer Ronnie Hawkins plays ''Bob Dylan''.

A year before Rolling Thunder, Dylan had played his first full tour since 1966, reuniting with The Band for a triumphant sequel to the tour that had drawn boos from die-hard folkies when he went electric. By 1974, no one was booing. The Band had established its own indelible catalogue of earthy, mysterious Americana, and Dylan had clearly won every bygone battle against folky purism. Their shared tour was a victory lap, but it was also a sure thing, a standard mid-70s tour by major stars: two months playing impersonal arenas in major markets. Rolling Thunder would be something else — a deliberate glance back for an experiment going forward. 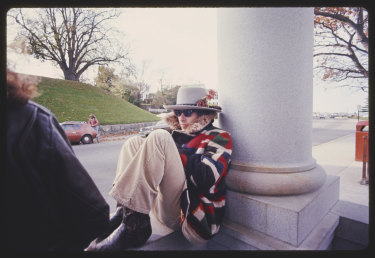 Bob Dylan on the road in a scene from Martin Scorsese’s documentary.Credit:Netflix

As early as 1964, with My Back Pages, Dylan explicitly repudiated the topical protest songs he wrote during his folk-revival ascent. From the mid-1960s onward he had plugged in to the blues, veered into country, made contrarian easy-listening tracks on Self-Portrait and hinted at gospel on New Morning. After touring with The Band, he recorded one of his unquestioned masterpieces, Blood on the Tracks, exploring lost love and perpetual restlessness in skeletal arrangements. But then, with the Rolling Thunder Revue, he decided to reconnect with what he had left behind.

He gathered Greenwich Village folk revival and Beat Generation figures who had been his early 1960s mentors and peers: Joan Baez, Ramblin' Jack Elliott, Bob Neuwirth and poet Allen Ginsberg, who appears in the film as a philosophical sage.

It turned out Dylan wasn't done with topical protest songs, either. He had an angry new one, Hurricane, which decried the triple-murder conviction of boxer Rubin (Hurricane) Carter as a racist injustice; Carter was eventually freed in 1985. The box set includes multiple renditions of Hurricane, and Dylan gives his all to every one. Dylan's set list for the Revue also revived a topical song from the 1960s: The Lonesome Death of Hattie Carroll, another furious reflection on race, class and murder.

In late 1975, Dylan had already recorded — but not yet released — Desire, his album featuring songwriting collaborations with theatre director Jacques Levy, including Hurricane and other taut, picaresque story-songs about love, trust and death, such as Isis and Romance in Durango, that Rolling Thunder audiences would be hearing for the first time. The album also included Sara, a desperate, mournful, arguably autobiographical love song to his wife; she filed for divorce in 1977.

The music on Desire drew on both Dylan's mid-1960s folk-rock and the wheezy authority of The Band, crucially topping the arrangements with Scarlet Rivera's wailing violin solos and countermelodies: teasing from a distance, spiralling in on him, darting away and returning like a hint of temptation. The story goes that Rivera joined the band by pure happenstance: Dylan was driving through downtown Manhattan and spotted her on the street, carrying her violin, and invited her to audition.

Dylan and his musical director, bassist Rob Stoner, assembled the rest of the Rolling Thunder band, called Guam; some of its members, including T Bone Burnett, would go on to form the Alpha Band. The Revue also took on Roger McGuinn from the Byrds, Mick Ronson from David Bowie's Spiders from Mars band, singer Ronee Blakley and, joining up partway through the tour, Joni Mitchell. 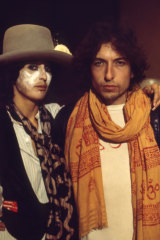 Joan Baez disguised herself as Dylan at one point in the tour.Credit:Netflix

There were ego battles between performers contending to sing alongside Dylan; there was sexual intrigue. There were minidramas of access and status; in the film, Baez recalls disguising herself as Dylan, wearing painted-on facial hair and a flower-topped hat like his pulled low, and finding out how people acted around him. Steven Soles, a guitarist in the band, recalls the atmosphere as "like the court of Henry VIII", including the possibility of getting beheaded.

The film also points up the mixed agendas for performers, chroniclers, hangers-on and of course Dylan himself. He is shown in 1975, sometimes driving the band's Winnebago down the road and, decades later, reflecting enigmatically on the Revue, detailing some recollections and shrugging off others. His utterances, past and recent, are typically guarded and oblique. Observers at the time compared Dylan's whiteface and certain plot points in Renaldo and Clara to the 1945 French film Les Enfants du Paradis, but in the Scorsese film, Dylan says he got the idea for whiteface from — welcome to the 1970s — Kiss.

Ever the trickster, Dylan in the Rolling Thunder Revue was many things: folk singer, songwriter, rock star, band leader, protester, actor, ringmaster, caballero, hero, joker. But from the music on the recordings, and the performances captured onstage, one thing is clear. At the Rolling Thunder Revue, behind the mask of whiteface, his eyes were ablaze.