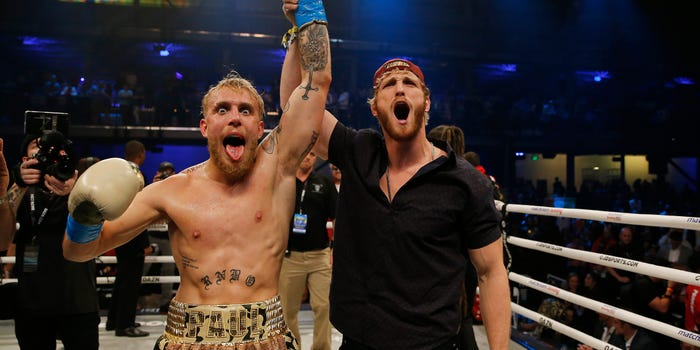 The brash statement came months after Paul, who now has over 22 million subscribers, posted his infamous "suicide forest" video in December 2017, which appeared to show a dead body and set off a wave of intense condemnation. Eventually, it resulted in his channel temporarily being demonetized by YouTube.

It's been two years since the incident and Paul wasn't wrong. Despite being embroiled in controversy for the better part of the last decade, both Logan and his younger brother Jake Paul appear to be uncancelable.

Cancel culture is a relatively recent phenomenon characterized by both public and private figures being called out online for perceived problematic behavior. For many smaller figures or everyday people, the effects can be catastrophic, but data analyzed by Insider shows that some of the internet's largest influencers are protected from cancelation.

Logan Paul's following skyrocketed after his most controversial video

According to YouTube subscriber data from Social Blade, a company that tracks social media statistics and analytics, the Paul brothers have very rarely seen their subscriber counts be negatively affected by their repeated antics.

Since the creation of Logan's main channel in 2013, he has never had a month where he lost more subscribers than he gained. The closest he may have come to this was in January 2020, when Social Blade and YouTube report him gaining approximately zero followers, though YouTube began providing less specific subscriber data around September 2019 that appears to be rounded.

Logan's career on YouTube has been rife with conflict. In the first few years following his move from Vine to YouTube in 2015, the creator received a near-constant barrage of negative attention for his outlandish stunts.

In 2017, Logan traveled to Japan to produce content for his channel, where he visited Aokigahara, colloquially known as the "suicide forest," in Japan. In a video he posted, he stumbled upon what appeared to be a human body hanging in a tree — footage that was largely viewed as insensitive.

In February 2018, YouTube suspended Logan's channel for his "pattern of behavior" following his encouragement to his followers to take part in the "Tide Pod Challenge."

Since then, Logan has avoided major controversial incidents, and has successfully built a brand that's capitalizing on a redemption narrative. Since he was temporarily suspended from YouTube, he's taken up boxing and created his own podcast series,"Impaulsive." In 2020 alone, he's gained over 2.5 million subscribers on YouTube.

According to Adam McIntyre, a YouTuber whose channel focuses on drama within the YouTube community, Logan's dialed-down antics have played a large role in rehabilitating his image. He noted that Logan has done a better job at this than his younger brother, Jake.

"He's been able to rebrand himself with the podcast and a more mature version of himself," McIntyre said.  "And so he is the biggest evolution in my opinion, out of both of them, because people can look at him and be like, 'Oh, he actually has changed.'"

Jake Paul has maintained an in-your-face reputation, and his platform is still growing

Jake Paul, the younger of the Paul brothers by two years, has come to court even more controversy than his older brother.

Like Logan, Jake is also a former Vine-star-turned-YouTuber and actor. Following his early success on YouTube and Vine, he starred on the Disney Channel show "Bizaardvark."

In early 2017, Jake launched "Team 10," a collaborative entertainment group of young influencers and creators that lived under one roof.

Following the formation of Team 10, Jake was accused by his neighbors of turning the neighborhood into a "living hell" and a "warzone" following reports of large parties and destruction of property. Former members of the collective said they faced homophobic abuse, bullying, and transphobia, most of which Paul's team has disputed.

Unlike his older brother, data from Social Blade shows that Jake Paul's antics have, at times, lost him followers. These instances occurred in September and December 2019 as well as in October 2020.

While it's unclear what specifically caused his subscribers to dip in September and December 2019, his main focus on the channel at the time were his stunts with Tana Mongeau as well as documenting the boxing careers of himself and his brother.

Mongeau, a YouTube video creator and influencer, began dating Jake in April 2019 before the two were "married" in a $500,000 non-legally binding ceremony in July 2019. In December, just five months later, the two called it quits. In the eight-month span that the two were a couple, Mongeau gained over a million subscribers on YouTube. Mongeau went on to say the marriage was "something fun and lighthearted that we're obviously doing for fun and for content."

In October 2020, Jake uploaded just one video, "I'm happy," where he also focused on his boxing journey. Earlier in the year, Jake was panned by critics for throwing large parties during the coronavirus pandemic, calling COVID-19 a "hoax," and appearing alongside looters at a mall, which eventually led to an FBI raid of his home.

As the Pauls have avoided full cancelation on YouTube, they've also expanded their aggressive and controversial brands to include boxing, a world that's full of macho personalities like the Paul brothers

Logan Paul pivoted to boxing in early 2018 and later made his professional debut in 2019 in a rematch against fellow YouTuber KSI. In December, it was announced that Logan will spar in an exhibition in February 2021 against Floyd Mayweather Jr, who is widely considered to be one of the greatest boxers of all time.

Jake most recently made headlines after quickly defeating former professional basketball player Nate Robinson as part of the undercard in an exhibition match between Mike Tyson and Roy Jones Jr. Following Jake's knockout win, boxing legend Tyson said that Paul is a "God-gifted YouTube boxer" and deserves a belt for his victory.

On Monday, Jake posted an expletive-filled video on his channel calling out Conor McGregor. It quickly received over 500,000 views.

The video is a great example of how the Paul brothers are mobilizing their existing audiences that loves controversy to further their boxing careers and brands.

With their resilient formula to internet success, it doesn't look like they'll be retiring from the spotlight in the near future.

"It's so easy for anyone to be like, 'Logan Paul just ended his career, he's done,'" Logan said to The Hollywood Reporter in 2018. "But the only person who will ever decide whether that's true is me."