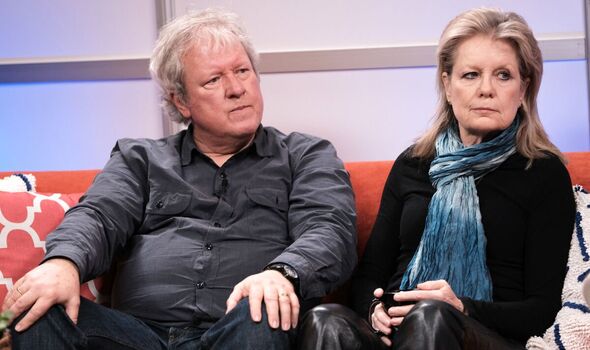 How do they do it? “You have to hold back a little mystery,” Tina, 72, tells me. “Chris has his secrets; I have mine. Avoiding the vulgarities is really important – let’s not go into details. It’s crazy to reveal everything.”

Sitting next to Tina in their Connecticut home, fellow Talking Heads and Tom Tom Club star Chris nods in agreement. “A lot of musicians have problems because they’re out on the road and they’ve left their wife or husband at home, and the other half has to wonder what’s going on.

“But with Tina and I, we always knew what was going on. It helped that we were working together. It could be a nightmare. But for me it was a good thing.”

By then they’d decamped to New York City where they met keyboardist and Harvard graduate Jerry Harrison, the last to join.

Though none of them came from there, Talking Heads were seen as the prototype New York new wave band. Arty, literate, cool. Rock bible Rolling Stone labelled them ‘the smartest group in the world’.

The star was nervy singer-guitarist Byrne who appeared to be channelling Anthony Perkins in Psycho. Not least when singing their most famous song, the 1977 classic Psycho Killer, co-written by Byrne, Frantz and Weymouth whose bass-line is one of the most memorable in rock.

Tina, a strong woman, refused to play on her sexuality to get attention. Were they aware of her pinup status at the time?

“Well, Tina is very modest, but I knew that, yes,” smiles Chris.

“I think now Chris tells me that, that’s why he wanted me in the band. Even though I was gifted,” she deadpans.

Did Chris have to shoo boy groupies away?

“I didn’t have to, because Tina would do that.”

The worst sexism she encountered was from Phil Spector who told her, “Shut up and play bass, don’t ever talk”. Consequently, they didn’t work together.

But they did work with Brian Eno, the go-to producer for the intellectual musical jet set – Bowie, Cage, Devo et al.

Relatively few Talking Heads’ songs were big commercial hits, but a series of gold and platinum-selling 1980s albums enshrined their reputation. Behind the scenes however, there were constant quarrels: about song-writing credits, about media attention, about power.

At the height of their fame, Byrne walked offstage three times in the middle of a show, angered by “musical imperfections.” When he left in 1988, he did so without telling the others.

Chris is conciliatory. “I prefer to remember the fonder aspects of working together. We had some great accomplishments.”

Tina less so. When I mention Byrne’s suggestion that he has undiagnosed Asperger’s – which might explain his awkwardness in social situations, his shying from eye-contact, his robotic obsessiveness – she snaps back: “He said that – but then said he didn’t. Not making eye contact can be due to lying. Some people, they’re just chronically not telling the truth, so they never look at you.”

The perception was, David the thin, pale aesthete with the strangulated voice, versus Tina the blonde-bob feminist with the throbbing earthy bass.

“Well, in many ways, yes,” she says, but insists she was right to question him. “We learned things decades after the fact.”

When their fourth album, Remain In Light, was released in 1980 – an innovative fusion of art rock, African polyrhythms and European electronics – it was accompanied by an ultra-pompous press handout written by Byrne and Eno citing ethnomusicologist John Miller Chernoff as the chief inspiration behind the music.

“I didn’t read those books,” huffs an infuriated Weymouth.

Although she and Chris provided the visually arresting cover images, they were excluded from the album’s promotion, most conspicuously in the famous video for the single, Once In A Lifetime, where a jittery Byrne bounces around submerged in an ocean of FX.

“It was about control,” says Tina. “David assumed credit for everything that ever happened in Talking Heads. And we allowed that to happen.”

Although they released four more studio albums, the image of the band – as excruciatingly self-absorbed – persisted. It was the thing Chris and Tina were desperately escaping from when they formed their musical side project, Tom Tom Club in 1981.

It was either that or leaving, says Tina. “I thought we were doing something wonderful. That’s how hopeful and optimistic I was, I thought everything we were doing was like a spiritual healing. Silly me.”

Tom Tom Club were an instant success. Blessed with a playful nursery-rhyme catchiness, their debut single Wordy Rappinghood went Top 10 here – something no previous Talking Heads single had done – and topped the US Disco chart.

“We were interested in making a record that would appeal to our friends back at the Mudd Club and Danceteria,” explains Chris, referring to New York’s best-known ‘alternative’ discos of the time. “Places where party people would congregate. Fortunately, it also appealed to people outside of that.”

Everyone it seems except for David Byrne.

“We felt great about it, but it felt awkward,” Tina recalls. “Our manager announced we had gone gold [for over 500,000 sales of the album in the US] while we were driving uptown in a taxi with David Byrne sitting next to me.

“He said, ‘Oh, it only went gold because it was commercial’. But it was a great thing, because it brought attention to Talking Heads.”

Later they found out that Byrne was trying to convince their manager to drop them. “He told him, ‘Just manage me and not the others…’.”

By the early 90s, with Byrne established as an esoteric solo artist, Chris and Tina continued to make “records with a smile” as Tom Tom Club, while dipping their toes into producing other artists, notably Happy Mondays, and guesting with high-profile Talking Heads-influenced acts like Gorillaz and feminist art ensemble Chicks On Speed.

They’ve had “enormous offers” to reform Talking Heads, says Chris, but “unfortunately one member of the band that just says, no; he’s not interested.”

In 2020, Frantz published his acclaimed memoir, Remain In Love. Among the many offbeat encounters with everyone from Mick Jagger to Sid Vicious, are some bittersweet memories of early Talking Heads – espying Tina for the first time, riding an old yellow bike “as in a Truffaut movie”.

Byrne then “had a full Rasputin beard, cut his hair very short by himself, wore second-hand clothes and rarely spoke to anyone”.

Unable to promote it at the time due to lockdowns, Frantz and Weymouth arrive in the UK in May for three ‘audience with’ style shows.

Chris: “We’ll be in conversation with a moderator. There will be some visuals, snapshots and so on. We’re not going to perform music, we’re just going to talk, and we’re going to enjoy being back in the UK.”

“Our marriage was 47 years ago,” says Tina. “But we’ve been friends for 51 years. So there’s plenty to talk about.”