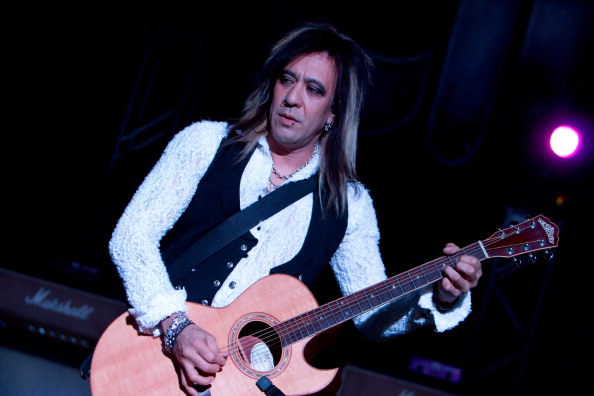 The rocker was found dead on Wednesday at his Nashville apartment by his ex-wife Gaile LaBar-Bernhardt, who went to check on him after he hadn’t been heard from in a few days.

LaBar’s son Sebastian, who he shared with Gaile, confirmed the news on Instagram, sharing pictures of his father through the years.

He wrote: ‘So i just got the call… @jefflabar , my father, my hero, my idol, passed away today. I’m currently at a loss for words. I love you pop! ❤️ if you could, please share pictures or video of all the fun times we all had with my dad. It would be greatly appreciated.’

LaBar’s Cinderella bandmates Tom Keifer, Eric Brittingham and Fred Coury wrote in a statement: ‘Heavy hearts cannot begin to describe the feeling of losing our brother Jeff. The bindbetween us over decades of creating music and touring the world is something that we as a band uniquely shared. Those memories with Jeff will be forever alive in our hearts.

‘It’s unimaginable that one of our band brothers has left us. We’re sending his wife Debinique, his son Sebastian, family, and friends our deepest condolences.

‘Jeff’s memory and music will be with us forever. We all… band, family and management appreciate the overwhelming outpouring of love. Rest in peace Jeff.’

No cause of death has been released.

The glam rock band had major success with their debut album Night Songs, which went triple platinum and contained the hit song Nobody’s Fool, and toured with acts including Poison and Jon Bon Jovi.

Further success came with their second album Long Cold Winter, which produced the major radio hit Don’t Know What You Got (Till Its Gone), and their third record Heartbreak Station, with the song Hot and Bothered featuring on the Wayne’s World soundtrack.

After a hiatus, the group reunited in 1996, but following years of touring, in 2006, lead singer Tom Keifer’s vocal cord haemorrhaged and the band’s shows were cancelled.

While Cinderella were on hiatus, LaBar played with the band Naked Beggars, which also included his Cinderella bandmate Eric Brittingham.

However, two years later, LaBar said he was done with music, and was enrolling in a a culinary arts associate degree program at The Art Institute of Tennessee.

He told Metal Edge Magazine’s Another FN Podcast in 2016: ‘I’m pretty much done playing music. I can’t do it on a high-school level anymore. With Cinderella, we have crew, we have bus drivers, we have buses and trucks and all. I wake up, I go on stage, I do my thing. On the level that I’ve been doing it for the past few years, I just don’t have it in me anymore.

‘I can’t travel in a van with trailers and [haul] my own gear until four in the morning. It’s just too hard. I enjoy cooking more.’