This article is a part of RS Recommends, an editorial series reviewing products in music and entertainment. Items are independently selected; Penske Media may earn a commission from purchases made from our links.

Take it from Jonas Blue, the U.K.-based DJ and producer known for his hits with Rita Ora, JP Cooper, and his tropical house remix of Tracy Chapman’s “Fast Car:” When it comes to creating a memorable DJ set, the secret is knowing how master your mix.

“A turntable is the classic DJ’s weapon for playing vinyl,” he explains, “but the mixer is the device that actually allows you to blend multiple tracks together to create a mix.”

In other words, you’ll need a mixer to add and edit multiple audio signals into one track. The audio could come from a turntable, cassette deck, CD player, laptop, or microphone. A mixer lets you blend the different sounds together, either for a straight-forward track, or one that’s turned-up with special digital effects. And while it’s easy to confuse these setups with those giant mixing boards you see at nightclubs and concert halls, a DJ mixer typically has fewer inputs, condensing those audio units into a more portable and efficient package.

When it comes to finding a reliable mixer, there are a number of things to consider. The first, is finding a quality preamplifier (or “preamp”) that will help level up your audio signals for processing and amplification. A preamp can also boost a low signal, so that your mix sounds cleaner and more even.

Next, you’ll want to look at compressors and equalizers, which let your adjust the dynamics of an audio signal, to punch up the guitars, say, or turn up the bass. Equalizers also help you balance out highs and lows, to get that perfect sound mix.

Finally, look for mixers that come pre-loaded with sound effects. “A mixer for me needs to have some sort of effects, as it’s a big part of how I might hype up the crowd in certain parts of a track, using the delays and filters for instance,” Blue says.

While Blue is a fan of the Pioneer DJM 900 (purchase, $2134.50 on Amazon.com), there are a number of more affordable options online that deliver similar features for a more accessible price-point, making them great for those just getting started with DJ-ing, or professional DJs who need an extra (smaller) mixer to take on-the-go.

Great for small band gigs or a full-fledged DJ set, this mixer from Mackie gets you six Vita preamps for your mic, guitar, keyboard and other instruments to plug into. The “ReadyFX” effects engine gets you 16 commonly-used effects like reverbs, delays, and choruses, while users say the built-in USB interface lets you connect your tracks for easy mixing, recording or playback.

For fine-tuning your levels, each channel features its own individual 3-band EQ; a 7-band graphic EQ lets you fine-tune your PA and monitors.

PROS: Easy to use and great for small to medium-sized projects like a speaking engagement, small club gig, or podcast.

CONS: Some users say the USB connection generated a lot of background noise. Also: this set comes with six mic inputs and 12 line inputs; if you need extra inputs or outputs, go with the larger unit. 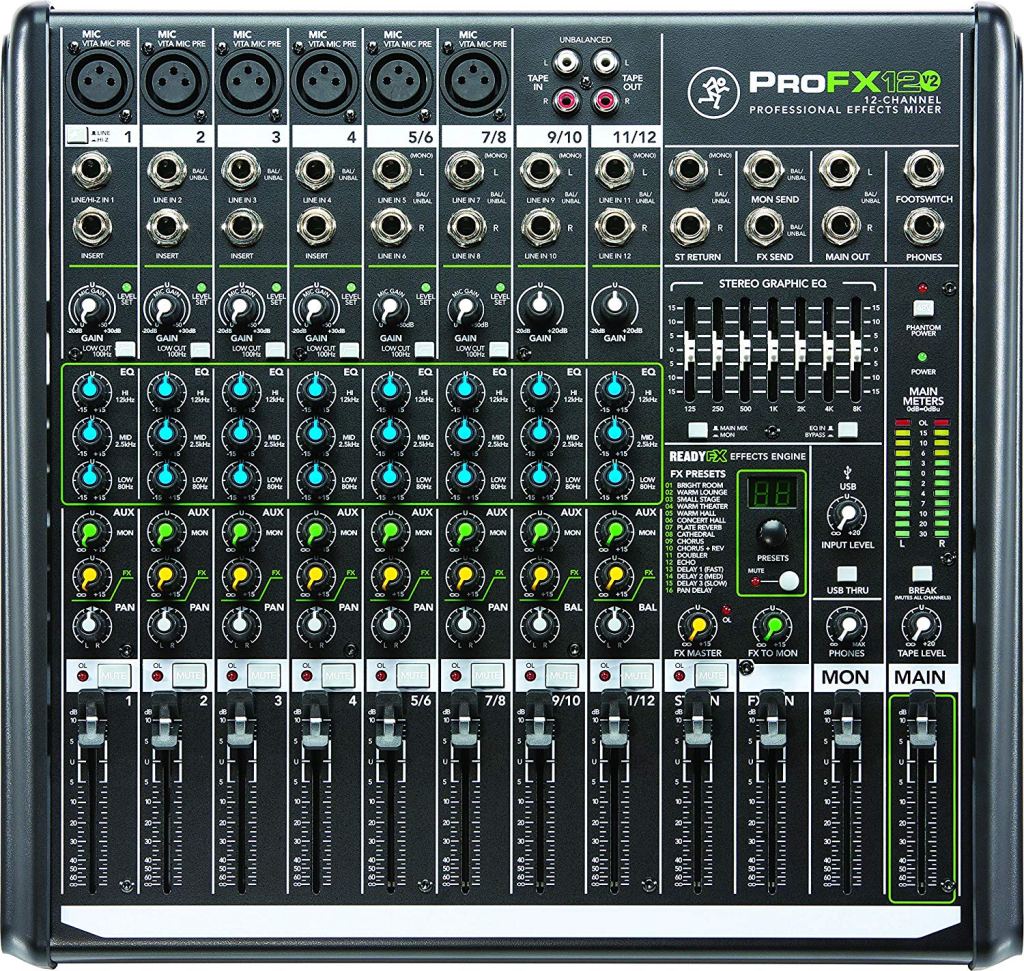 Yamaha is known for their professional audio equipment, and the same technology used in their high-end models is found in this value-packed package.

What we like: the studio-grade preamps boost your audio to more consistent levels, resulting in smoother, more accurate sound. The 3-band equalizers and high-pass filters let you eliminate low-frequency noise, for a cleaner, tighter mix.

Choose from a straight-forward pass, or use Yamaha’s SPX digital multi-effect processor to add, edit and mix different effects into your track. Users say the reverb in particular, is surprisingly warm.

CONS: Some say the unit gets quite hot. 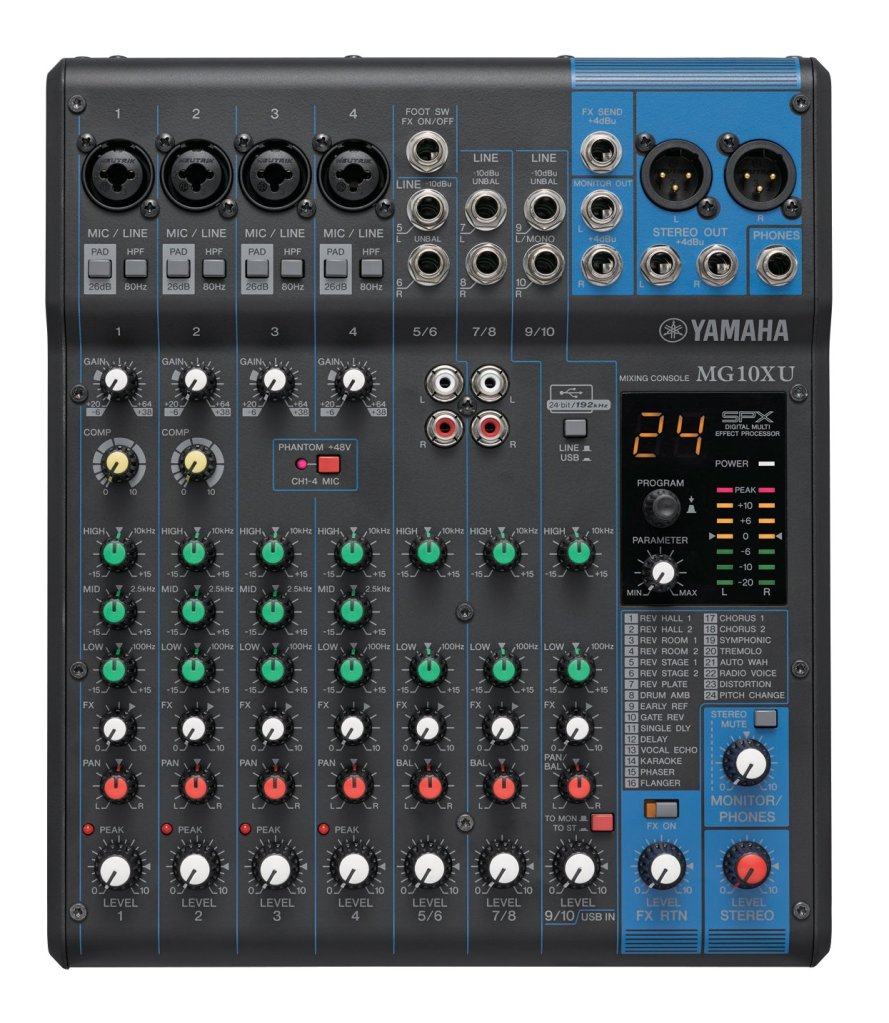 Great for presentations, recitals, solo gigs, and other intimate settings, this Behringer set gets you all the basic functions of a mixer in a slim, portable package.

The 5-input deck is enough to start mixing and recording, and a separate headphone output let you plug in for a closer listen (and to cue up your tracks). The mic preamp, meantime, can accommodate either a dynamic or condenser microphone.

The so-called 2-band “British EQ” gets its name from mixing consoles used by sound engineers in London in the 60s and 70s. Though Behringer is a German brand, they use the “British EQ” term here to denote what they say is a warmer, richer, more fluid sound than other models.

PROS: At just 1.2 pounds, it’s the lightest option on our list.

CONS: Only one EQ channel and no effects/reverb; some users found it difficult to set up. 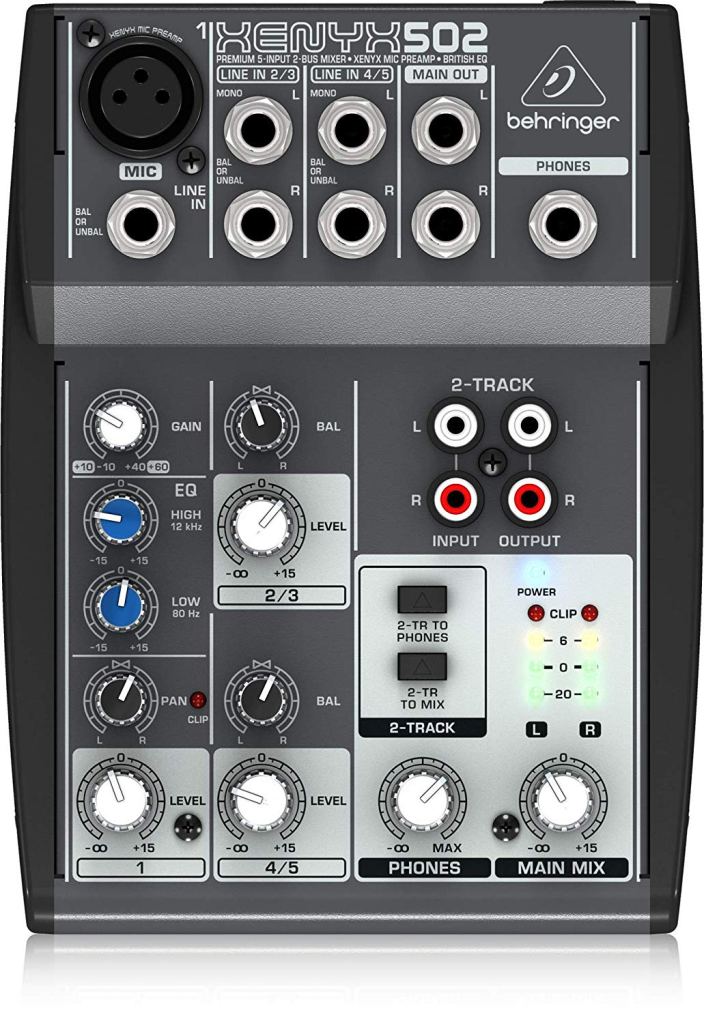