In music notation, ghost notes are the ones with crosses instead of ovals on the ends of their staves. They have rhythmic value but no pitch. Thwack. Tick. Click. Boompf. Ghost notes. It might not sound like much to work with, but swag counts for a lot.

"In America, swag is a hip-hop term for style," says drummer Robert "Sput" Searight. He's the Texan core, alongside New York percussionist Nate Werth, of Ghost-Note. "Swag is like, cool," he says. "Our swag is our funk. Our swag is our attitude." 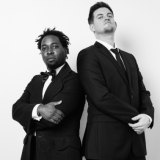 All three are big players on Swagism, the second Ghost-Note album. Their first, Fortified, was something of an experiment in rhythm values in 2016: some melodic elements, but the gist was highly arranged and layered percussive interplay between the two moonlighting members of Snarky Puppy.

Come 2018, the times called for a more full-blooded response.

"When we were making this record our country was going through such … I mean, I can't speak for the history of the country, but I can speak for my existence on this Earth and … it was probably the worst of times, in terms of being unified," Searight says.

"We wanted to come together with some kind of symbolism on a record that could recognise what's happening. We're not gonna be silent about things that are totally messed up. We try to speak on it as much as we can, without becoming politicians."

The stand was important, Werth elaborates, "especially as a multicultural group of individuals [with] a lot of different emotions floating around".

"We were making an instrumental record but we realised we wanted there to be words; not just lyrics but spoken words, and a message [of] no more tolerance of the kind of issues that keep on happening in our country."

The words on the album are less circumspect. "We're on the verge of a civil war," declares an opening spoken-word track that calls out the "increasing racial divide and bigotry" splitting the nation.

The sitting US president is a figure of ridicule in the dialogue between tracks, a running comic commentary with Searight and trumpet player Jay Jennings making like the grumpy old balcony hecklers from The Muppet Show. 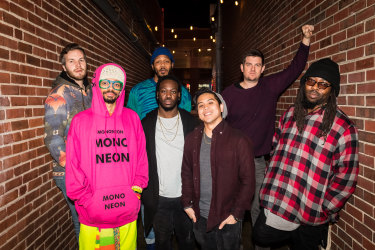 The least funny moment is the monologue by vocalist Prudence TheAuset Sneed that precedes a track called No More Silence.

The long list of poets and players across the 90-minute album underscores the fundamental message of unity under pressure. In truth, the input of guests as esteemed as Kamasi Washington and several former members of Prince's universe averted disaster, after a key compositional member, Nate's brother Nick, suddenly left the company.

"There was a season of panic that happened, because we didn't have material," Searight says, "but the wheels were already in motion. We already had [studio] time booked and we were already headed to New Orleans.

"We got to New Orleans and I pulled out my computer and I started asking everybody to throw me some tunes, some ideas, and I started pulling out old stuff, incomplete ideas and we decided to try to piece together a record. We were going to do this record regardless."

In terms of the fortified funk element, there's no denying the staggering propulsion of bass guitar prodigy Dwayne "MonoNeon" Thomas, whose YouTube channel is justly famed.

We have been accumulating these very phenomenal young musicians in the band.

"Mono came in with a day's notice and learnt all the material and played like he had written it," says Searight. "He's the only person I could've called in to do that because I know he had very high skills, and amazing retaining skills.

"The last couple of years that we've been in existence we have been accumulating these very phenomenal young musicians in the band," he adds, mentioning the sax/flute trio of Sylvester Onyejiaka, Jonathan Mones and Mike Jelani Brooks.

As the fully fleshed-out and funky Ghost-Note prepares to kick off another leg of their Swagism world tour in Melbourne next week, it's only fair to warn that down here, asking to see somebody's swag might be grounds for misinterpretation.

"So Swagism is the art of sleeping under the stars? I guess that kind of applies to us," Werth says. "We're an independent group of musicians and the only thing right now that fuels us is our passion to get from city to city to feed ourselves."