Herbie Hancock has restored my faith. For years I've despaired that audiences for most concert music idioms have steadily grown older, with players now routinely half the age of their listeners. But Hancock packed the place out with all ages — as he has probably done for 57 years. Few performers in any idiom could make such a claim. 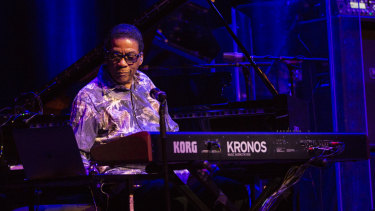 If you like your jazz so dirtied up that it starts to smell, Herbie Hancock (pictured) is your go-to man. Credit:Anna Madden

The appeal partly lies in his constant ability (shared with his great mentor Miles Davis) to reinvent himself: to bring the language of jazz to anything from Joni Mitchell's music to Stephen Sondheim's. Partly it's that for six decades he has been among the finest and most influential improvising pianists and jazz composers of all.

And then there's the "f" word. If you like your jazz so dirtied up that it starts to smell, or if you like your funk peppered with hot solos, Hancock has been the go-to man for half a century.

Of course, he can't do that by himself, and guitarist Lionel Loueke, bassist James Genus and drummer Vinnie Colaiuta may be even better than his fabled 1970s Head Hunters outfit (which I never heard live). Certainly, it's hard to imagine anyone playing this music better than Genus, who built grooves so wicked that they could kneecap you, and who layered a little profundity into the often showy music made by the others.

As for soloing, Hancock was still the master, whether playing synthesiser or piano. For all his music's populist undercurrent, he was never decorating silence or making air molecules collide for the sake of it: both the ideas and the statement of them were always stunningly clear and articulate, often uniquely combining lyricism with risk-taking harmonic development.

The versatile Loueke created dazzlingly original melodic lines but persisted with an unappealing guitar-synth sound. Colaiuta jumped on every idea like a creature of prey, sometimes to exhilarating effect, and sometimes so you wished he'd make the music less about the drums. Nonetheless, Actual Proof and Chameleon were jazz-funk on steroids, and yes, they played Cantaloupe Island.