Tupac Shakur had major plans in the works ahead of his unfortunate death in 1996. Aside from music and screenplays, the Poetic Justice star was excited to transition into the world of fashion and food and beverage. One of the dreams he was working to fulfill was opening a soul food restaurant in California. In his current traveling museum exhibit, Tupac’s plans for the restaurant were revealed.

Tupac loved good food and libations and wanted to bring the world of cuisine he grew accustomed to his own fans, even in underserved communities who were looking for an escape. The restaurant was to be called Powamekka Cafe, with the tagline, “A Passionate Paradise 4 People With Power 2 Play and Parlay,” and “The Perfect Hideout 4 Those Who Wish 2 Escape The Worldz Cold Reality.”

A blueprint of the restaurant with a logo featuring an ankh and ocean waves surrounding the name of the restaurant that Tupac devised is also featured in his original written plan throughout the museum currently on display in LA. Bathrooms for women was listed as “Divaz” and for men as “Playaz.” 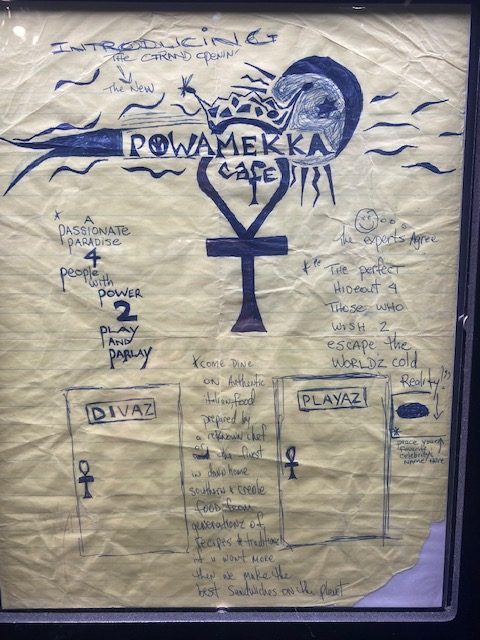 Sandwiches listed included cheeseburgers and hamburgers, as well as a turkey club. He also had fruit salad listed as a healthier option as a snack.

Aside from coke products and non-alcoholic beverages such as fruit punch, Tupac had quite the list of cocktails. His personal favorites such as Hennessey and coke (Playa Passion), gin and juice, and baileys and cream with Remy (Ghetto Russian) are listed on his original draft.

In 2017, to commemorate the 20th anniversary of the rapper’s death, Sweet Chick — a popular eatery in New York City’s Lower East Side — actualized Tupac’s vision for the restaurant. Co-owned by restaurateur John Seymore and rapper Nas, the menu was changed for the day to reflect Tupac’s dream menu.

Notes of his plans were displayed in the East Village, as well as family photos of him and social activist leaders Malcolm X and Martin Luther King Jr. Quotes from Tupac also lined the walls of the restaurant.

The idea for the popup restaurant came from Bravado CEO Mat Vlasic and Seymour, who then spoke with Nas before conferring with Tupac’s estate. “They brought out these papers with the full-blown menu and I was like, ‘Oh my God, this is insane,’” Seymour said of initially seeing Tupac’s vision on paper, Billboard Magazine reports. “That’s before the Food Network. That was before restaurants were cool and that was a thing to do. He was thinking about this over 20 years ago…So when this [Tupac cafe] came across, I was like, ‘Man, here’s another opportunity to do something amazing.’”