“Side Hustle” is a recurring column in which staff writer Charles Holmes reviews celebrity and celebrity adjacent products. You can read his previous entry, on Rick Ross’s hair care and grooming line, here. If the mood takes you, you can also read his review of Ariana Grande’s Cloud Machiatto here.

Ed Sheeran is a condiment. More precisely, he’s the proud recipient of a ketchup line, Heinz Tomato Edchup. For years, the singer was a noted enthusiast of the red liquid. His bicep has a tattoo of a Heinz label, and a widely publicized rumor has it that members of his entourage are forced to carry emergency bottles of the crimson confection around to satisfy Sheeran’s thirst for what we assume he refers to as “the red gold” or “king’s blood.”

Ed’s announcement of Edchup on Instagram was like a siren call for me, someone who occasionally reviews celebrity products as part of my job. One desperate email to a publicist later, and a bottle was sitting on my chair. As I cradled Edchup in my hands, I noticed the small tomato wearing Sheeran’s characteristic glasses and sporting a leafy head of hair staring back from the Heinz label. The ketchup enclosed in the seductive plastic bottle was eerily enticing. A question remained: was Edchup the best ketchup on the planet, or even distinguishable from the classic Heinz ketchup it was derived from? A blind taste test was the only — only — way to find out.

“Why do you need Curry Ketchup?” she said, with some contempt.

“Oh, that makes sense,” she replied.

Ultimately, six different ketchups were chosen for my blind panel: Heinz Tomato Edchup, Heinz Tomato Ketchup, Brooklyn Delhi Curry Ketchup, Steve’s Paleogoods Paleochef Ketchup, Table Land Tomato Ketchup and McDonalds Ketchup. Each were put in a nondescript espresso cup while I was out of the room; when I returned, the office we had commandeered smelled like fries.

As I began odyssey, I realized ketchup is a wily temptress. It’s nearly impossible to accurately describe ketchup’s taste — though its entire reason for existence is apparently to 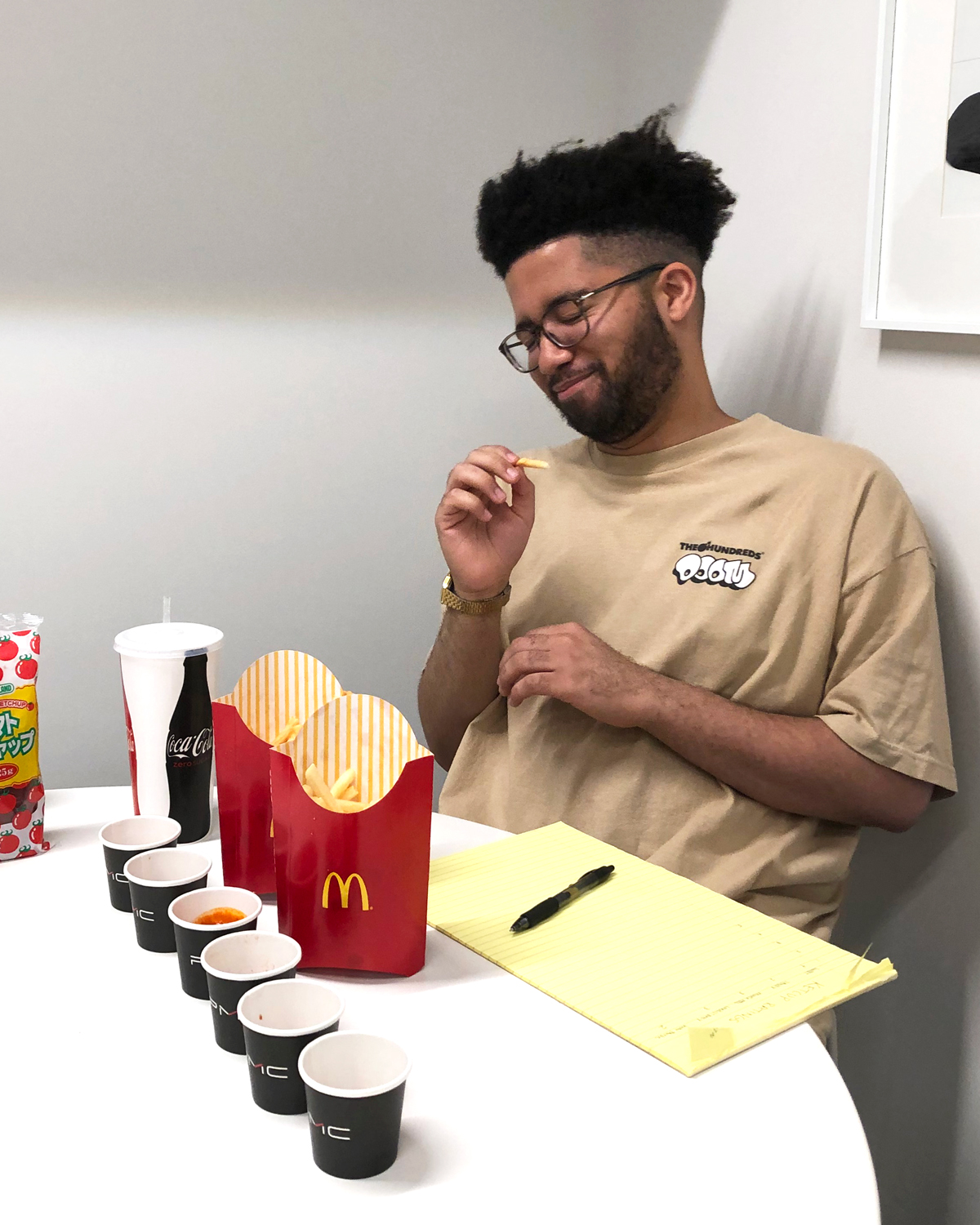 approximate the taste of tomatoes, it really only ends up tasting like ketchup. However, the flavor and consistency varies from brand to brand. Edchup, and by extension Ed Sheeran, had its work cut out for it to cut through the noise.

Editor’s note: Charles invented a surprisingly complicated taste-based system for ranking ketchup based on, among other things, “mouthfeel” and “wow factor.” In the interest of keeping this interesting, I’ve cut out the section explaining each ranking, because it was simply too long, and ultimately unnecessary for any reader. If you would like to hear more about the ranking system detailed above, feel free to reach out to Charles at [email protected]

Armed with McDonald’s fries as my control group tasting tool, I got to tasting in a random order. Two brief observations: No amount of water can wash the aftertaste of bad ketchup away, and experimentation in new ketchups is often a dangerous game. For example, though the Curry ketchup scored a 4 in the “wow factor” category — the highest of all ketchups in terms of wow — it earned it through genuine surprise, not delight. Likewise, the Paleo ketchup — “no gluten, no refined sugars, no junk added,” said its bottle — made the case that perhaps junk needs to be added, if ketchup is to be enjoyed. It was the worst ketchup of the afternoon, and of my life.

Eventually, I arrived at the Edchup. Fruity and acid-infused with a hint of musical appropriation, Sheeran’s ketchup had a je ne sais quoi that the regular Heinz lacked. The moment that creamy tang hit my mouth, I knew Edchup was rolling across my taste buds. The great people at Heinz put a little dash of something extra in Edchup to make it sing. I think it might be a sprinkle more onion powder.

[Editor’s note: According to its ingredient list, Heinz Tomato Edchup is identical to normal Heinz ketchup, except for its Sheeran-featuring label. However, subjectivity in criticism is important, and Charles’ beliefs are not to be taken away from him.]

Unfortunately for Sheeran, there was a dark horse in the race: A random ketchup I found at a Japanese mini-mart beneath the Rolling Stone offices. Across the board, from sweetness to mouthfeel, Table Land Ketchup stole the show, and ended Ed Sheeran’s chance to become the face of the single greatest ketchup I’ve ever tasted. According to its label, there were notes of sake and apple in the mix — unlikely additions — which likely gave it the bounce, zest and subtlety to easily outperform the competition. Bravo, Table Land Ketchup. Bravo.