Around 2013, University of Oslo professor Kyle Devine was reading a lot about junk. He’d grown fascinated with a subset of media studies that grappled with the growing problem of e-waste — old cellphones, computers, printers, etc. — and wondered if the problem was also plaguing ostensibly intangible things like music.

“There’s this old quote, ‘Music is the most immaterial of the arts,’ and I think that that idea about music has become more widely held as music has become something that we increasingly get from the cloud,” Devine tells Rolling Stone. “So I started looking at the contemporary picture and thinking, ‘I bet that music has some kind of significant contributing role in pollution and e-waste.’ What is a CD actually made out of? What is a record made out of? How are they made? What are the materials? What are the human and environmental costs of these formats?”

Over the next several years, Devine explored the environmental impact of music consumption, from the early days of shellac and vinyl through the cassette and CD booms to the streaming age. The results of the study, done in coordination with researchers at the University of Glasgow, estimate that the amount of plastic used to make physical records has plummeted from 61 million kilograms in the 2000s to about 8 million kilograms as of 2016. But the energy it takes to stream and download digital music has caused greenhouse gas (GHG) emissions to rise sharply: The study estimates that music consumption in the 2000s resulted in the emission of approximately 157 million kilograms of greenhouse gas equivalents; now the amount of GHGs generated by the energy needed to transmit music for streaming is estimated to be between 200 and 350 million kilograms.

Devine, who will publish his findings in a new book Decomposed this October via MIT Press, conducted his research on streaming using data from the Recording Industry Association of America for 2015 and 2016. He averaged the number of songs streamed and downloaded in those years and factored it with the amount of electricity it takes to download one gigabyte of data, which at the time was roughly equivalent to the amount of electricity it takes a standard lightbulb to shine for an hour. Devine then used Greenpeace’s “Click Clean Scorecard” to find what kinds of energy were being used to power streaming sites — coal, nuclear, gas or renewable — and used the average amount of carbon dioxide equivalents created by each to create an approximate picture of greenhouse gas emissions in the streaming era.

“That electricity figure doesn’t include storage and processing in a data center and it doesn’t include user devices and the electricity to charge your phone or anything like that,” he says. “There’s additional complexity — file resolution matters, it’s more data if you’re watching a video on YouTube versus streaming a high definition album on Spotify. The variables are almost endless.” 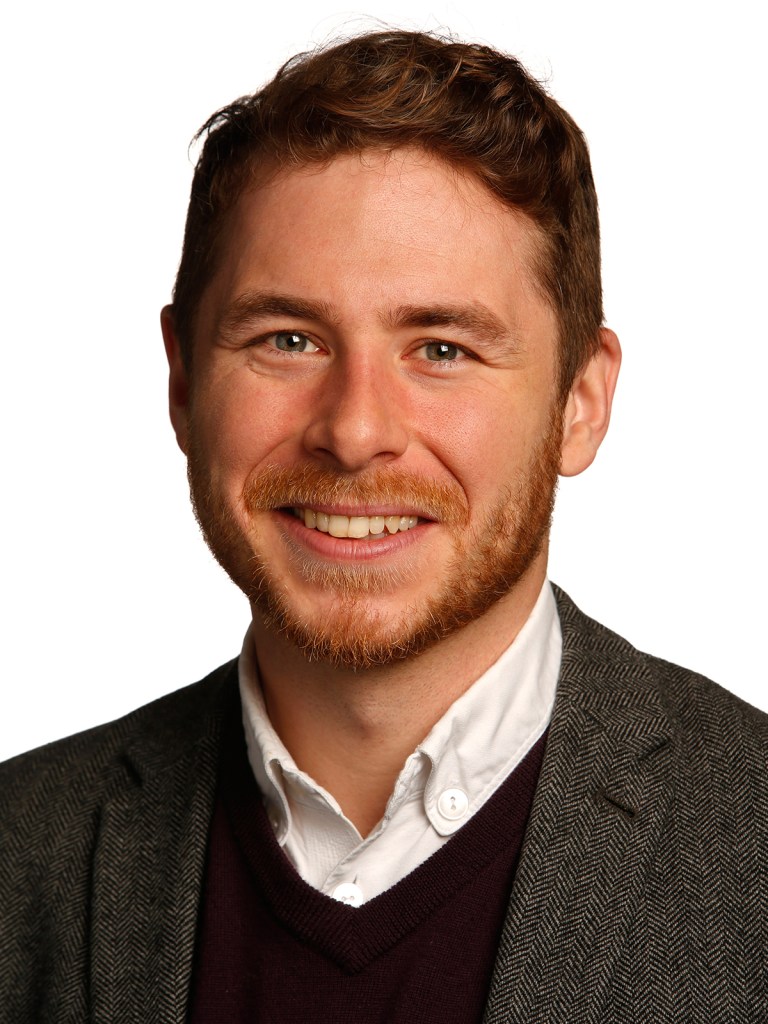 Devine is quick to note that he’s not on an anti-streaming crusade, nor is he out to make anyone feel guilty. He actively uses Spotify and calls the study “a simple exercise in transparency and accountability; to talk about things and think about them.”

In recent years, the major players in music streaming have been working to improve the sustainability of their facilities and operations. When Devine was conducting his research, he was unable to get anyone at Spotify to discuss the environmental impact of their service and its data centers (the company’s lack of transparency at the time was a big factor in the D grade it received on Greenpeace’s Click Clean Scorecard). Though a representative from Spotify also declined Rolling Stone’s request to discuss the issue on the record, the company did share its first public sustainability report in 2017. In it, the company committed to achieving carbon neutrality and touted the migration of its server operations onto the Google Cloud Platform (GCP).

Per its 2018 sustainability report, the move to GCP allowed Spotify to decommission six of its seven data centers (the last is expected to close by the end of 2019) and reduce its carbon footprint by almost 1,500 tons. The report also claimed that the move made Spotify’s computing platform nearly “100 percent carbon neutral,” though Devine cautioned there is some reading in between the lines involved.

“That doesn’t mean that Google is running on completely renewable energy or that their CO2 emissions are any lower,” he says. “What they’re doing is purchasing or investing in renewable energy at a rate that equals or matches the amount of energy that their using anyway.”

As for the other major streaming services, SoundCloud relies primarily on Amazon Web Services, which also hosts Amazon’s own streaming service, Amazon Music (a representative for SoundCloud declined to speak with Rolling Stone). Apple, meanwhile, hosts Apple Music, the iTunes Store and Beats 1 radio on its own cloud operations (a representative for Apple Music did not return Rolling Stone’s request for comment). Both Apple and Amazon have invested heavily in renewable energy to power their cloud operations, though Apple has been far more forthright about its environmental footprint in recent years. Only this past March did Amazon CEO Jeff Bezos promise to release a full emissions report by the end of 2019.

In 2018, Apple announced in its sustainability report that all of its facilities — data centers, offices, retail stores, etc. — were powered by renewable energy, and its most recent sustainability report proudly touted data centers that produce close to no carbon emissions from electricity. But just like Google, Apple also relies on renewable energy certificates to reach that magic 100 percent number. As Nicole Kobie recently wrote in Wired, these certificates, like carbon offsets, are purchased when tech companies still have to draw some power from the grid — power that is inevitably produced by dirty or non-renewable sources.

Data centers are reportedly responsible for about two percent of the world’s greenhouse gas emissions, a carbon footprint nearly equal to the airline industry. And music streaming is obviously just one component of the internet that these data centers power, along with video streaming, social media and this article. Getting to a point where data centers legitimately run on wholly renewable energy is a massive and important undertaking, but it’s also just one component of greening the internet. 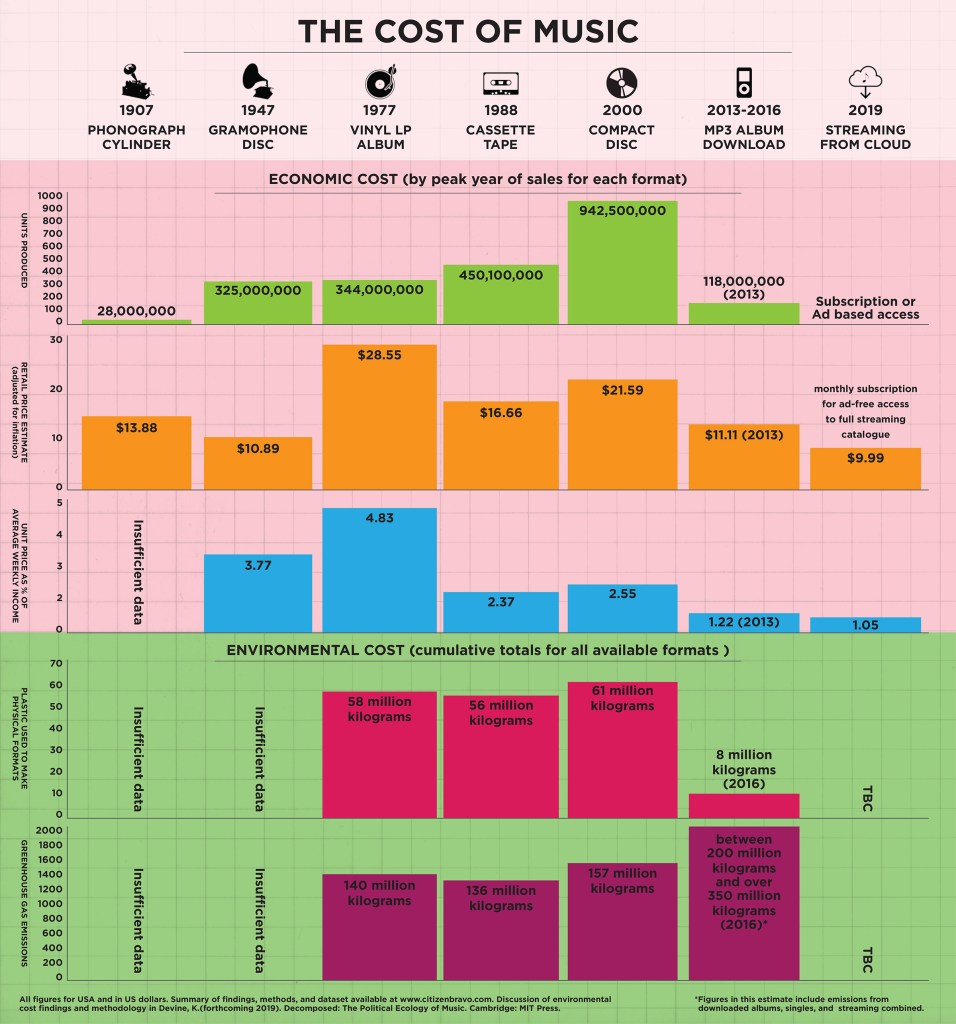 “The amount that people are streaming and downloading is increasing at such a rate that they may outweigh any gains in the efficiency of the system,” Devine says. “This is just in the U.S. and once we take into account places where streaming is huge — China, or Africa or India — places where there are less stringent requirements on the generation of power for the internet, I don’t have those numbers, but my sense is the picture gets even uglier.”

All of this places some responsibility on the listener, even if the steps they can take seem small. In an article for The Conversation published in January, Sharon George and Deirdre McKay outlined a few potentially greener methods of listening. They suggested buying a physical album may actually be more environmentally friendly if you plan to listen to it repeatedly, as 27 full streams would likely use more energy than it takes to produce and manufacture the same record. They also noted that downloading music from streaming services for offline listening could cut down on the energy it takes to get a song from the cloud to your ears.

Devine’s work also serves as a reminder that the production, dissemination and consumption of music has always cost energy and resources, whether it was the plastic for CDs and cassettes or the oil-based PVC used for vinyl records. Early 78 RPM records made out of shellac — a biodegradable resin secreted by lac bugs — might’ve been truly sustainable, but Devine notes that these records were often produced under horrific, sweatshop-like conditions. Though the findings of his study may seem overwhelming and dire, Devine hopes his work will help listeners reconfigure our notion of music as immaterial and recognize the tremendous amount of power and energy generated when we press play.

“We can’t snap our fingers and magically go back to records made of shellac or anything like that, because you can’t just … undo the culture that’s built up around our expectations of access to music,” he says. “I really think that any solutions come from looking forward.”