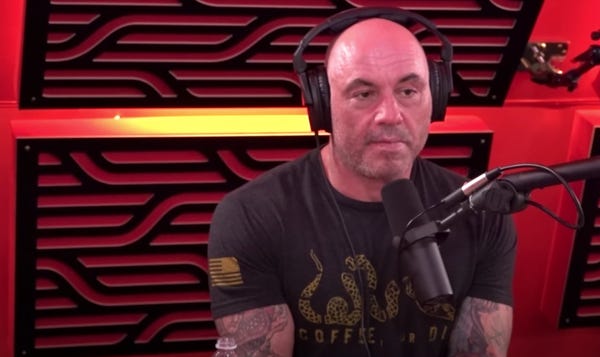 Joe Rogan made incendiary remarks about Caitlyn Jenner in an episode of his podcast on Friday, making the unfounded claim that living with the Kardashian women somehow contributed to her transgender identity.

Explaining a standup comedy bit he'd performed in the past, Rogan told Tim Kennedy, a retired mixed martial arts fighter who was the episode's featured guest, that he questioned people who said Jenner was born a woman.

"I was like, 'Maybe. Or maybe if you live with crazy b—-es long enough, they f—-ing turn you into one. Maybe you go crazy,'" Rogan said. Throughout the segment, Rogan misgendered Jenner and called her by her deadname, which is the name she previously went by before transitioning.

"We lost a f—ing Olympic gold medalist, goddamn it. We lost one of our greatest athletes ever," he said, claiming that he was not "dehumanizing trans people," but just asking "are we sure?"

The comments were made roughly 12 minutes into a three-hour episode of the "Joe Rogan Experience" podcast, which has over 9 million subscribers on YouTube. The episode was published Friday on Spotify, where Rogan has an exclusive streaming deal, and in a YouTube video.

Insider has reached out to a representative for the Kardashian-Jenners for comment.

Rogan has a history of making transphobic comments

Rogan, who is considered one of the most influential podcasters in the world, has a "long history of demonizing and dehumanizing" the trans community, said Lucas Acosta, a press secretary for the Human Rights Campaign (HRC).

In a July episode of the podcast, Rogan made the false claim that being transgender is a "social contagion." In the same episode, Rogan claimed that the trans community had an "agenda" that "anyone who even thinks they might be trans should be trans, are trans, and the more trans people the better. The more kids that transition the better."

"This man has absolutely no problem demonizing our community, and demonizing marginalized people," Acosta told Insider.

2020 has shown an extremely high rate of anti-trans killings in the US, with at least 26 trans or gender-nonconforming people killed in the US in the first nine months of the year, according to the HRC.

Acosta said that when a person as powerful as Rogan makes these kinds of comments, "it dehumanizes an entire community that is already marginalized."

"They become less human in the eyes of the public," he added.

When announcing the $100 million deal with Rogan, Spotify said in a press release that his podcast had been the most-searched show on the platform and called him "one of culture's leading voices."

A Spotify representative did not immediately respond to a request for comment.

A representative for YouTube, where Rogan posts video versions of his podcast episodes, told Insider that the platform was reviewing the video.

President Trump has aligned himself with Rogan

Just three days after Rogan's anti-trans comments, President Trump expressed interest in participating in a presidential debate moderated by Rogan. In response to a tweet from Kennedy asking if anyone wanted to see Rogan moderate a debate between Trump and Joe Biden, Trump wrote, "I do!"

Given Rogan's offensive comments, Acosta criticized Trump for appearing to consider participating in an event with the podcast host, which would undoubtedly give Rogan even more visibility.

"The last thing we need is Joe Rogan getting a larger platform," Acosta said.