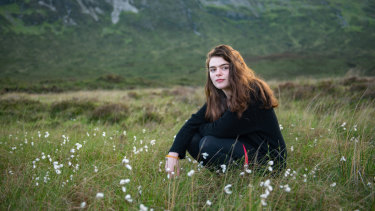 Brighde Chaimbeul plays Gaelic music as if by candlelight.Credit:Francesca Pagni.

The intricacy of Celtic jewellery, with is maze-like interweaving of lines without apparent end, its recurrent patterns and its mythical creatures swallowing their own tails, finds a sonic mirror in the culture's traditional music.

Brighde Chaimbeul (pronounced Bree-choo Campbell), who hails from the Isle of Skye, plays the Scottish smallpipes, the mellower, woody sound of which is ideal for illuminating, as if by candlelight, the intricate beauty of the melodies.

While these are predominantly Gaelic (many coming from Patrick McDonald's 1784 collection), others have been sourced from as far afield as Bulgaria – a musical overlap akin to that with Brittany.

Chaimbeul is joined by Aidan O'Rourke on fiddle and Radie Peat on concertina (with a wee dash of vocals from Rona Lightfoot), and their collective brilliance is pivotal in breathing life into these tunes.

The audio verite recording was made in a church, so the sounds (including a harmonium Chaimbeul found there) come snaking from the speakers with natural reverb, and swirl around each other to quite unearthly effect. When it is played like this, few other musical idioms can be simultaneously as exhilarating and as soothing. John Shand

Before Avicii's untimely death, Tim was already in its final stages of production, and so it's immeasurably sad that it now comes to be released as his first posthumous album. He was born Tim Bergling, and this eponymously titled record is a summation both of his contribution to EDM (electronic dance music) and of his demons.

Melancholy admissions permeate the stadium-filling melodies of SOS and Tough Love, the maudlin lyrics dancing across exuberant electronic beats. "Can you hear me? SOS/Help me put my mind to rest," Aloe Blacc (a close friend and collaborator) sings on the former. Coldplay's Chris Martin lilts on the piano-laden Heaven, while Imagine Dragons veer sharply into pop with Heart Upon My Sleeve.

For those looking for answers about Bergling's tragic end, Ain't a Thing marks his struggle with global recognition and rigorous touring schedules. Avicii pioneered what is ostensibly celebrated as festival EDM: florid exaltation, whirring basslines and euphoric anthems that have defined an entire generation.

Wake Me Up, Levels and Hey Brother will see Bergling's legacy live on, creating new fans beyond his time. As Avicii's final encore performance, Tim is his most intimate show yet, and a suitable send-off for a superstar. Kish Lal

It is testament to London's enduring cultural vivacity and resilience that, despite the UK's current political quagmire, a band as diverse and amorphous as Vanishing Twin can still thrive.

The quintet's second album is a dazzling melange of styles, from krautrock to bossa nova, and on to the celestial funk of Sun Ra. The record also gives an abiding impression of film soundtracks and library music from the 1960s: think John Barry, and in particular Roy Budd's magnificent theme from Get Carter. S

ome tracks, meanwhile, such as Wise Children, hint at the dreamy instrumental passages from the Beach Boys' Pet Sounds, and others, like Backstroke, adventurously toy with more frenetic rhythms.

The album is enriched further by the vocals being delivered in the various native languages of band members, including Japanese, French and Italian as well as English, with singer Cathy Lucas's undemonstrative but firm singing another highlight.

If this all sounds a bit complicated and overcooked, be assured Vanishing Twin are also highly capable of radio-friendly pop, as Magician's Success proves. This wildly collagist, consistently cinematic LP is a remarkable concoction of ideas.  Barnaby Smith

Eric Dolphy was dead at 36. Among jazz's most innovative improvisers, he died of undiagnosed diabetes; died not knowing his place in history was assured, after suffering such relentless sniping and slurs in New York as drove him to Europe.

Some mistook his leaping melodic lines for untutored freedom, but the smarter ones – John Coltrane, Charles Mingus, Ornette Coleman and Max Roach among them – understood his genius. Dolphy's studio-album output as leader was minuscule, given his stature as a multi-instrumentalist revolutionary; one with a different voice on each instrument: on flute almost a classicist; on alto saxophone a bebopper on a trampoline; on bass clarinet a ghost grieving for those left behind.

This triple set expands on the Conversations and Iron Man album sessions with a wealth of previously unleased recordings, including musical conversations between Richard Davis's bass and Dolphy's bass clarinet that transcend time and idiom. The biggest surprise, A Personal Statement, comes from an extraneous session that improbably combined Dolphy's vaulting alto with future smooth-jazz pianist Bob James, a rhythm section and the astonishing voice of countertenor David Swartz. This must be heard to be believed. John Shand

Technology is an amazing leveller. Take amplification: not only can it make a song fill a stadium, it also lets the delicate voices and subtle timbres lurking within an acoustic mix come forward and play with the big kids.

How else would we discover that the viola da gamba, a seven-stringed French baroque instrument, has such a husky and seductive singing voice? Or that in its twenty-first century electric reincarnation it is uncannily close to the low saxophone with which it is paired on Elysian Fields' debut album?

Cellist and gamba player Jenny Eriksson is the driving force behind this genre-defying six-piece band, which brings together sounds of poetry, folk, jazz, baroque and rock music. It is also inspired by collaboration, with original compositions from jazz pianist Matt McMahon, saxophonist Matt Keegan and bass player Siebe Pogson.

There are many whispered secrets to be found here: the title track, What Should I Say, is an otherworldly setting of the words of 16th-century poet John Wyatt, voiced with fragile beauty by violinist and vocalist Susie Bishop, while Matt Keegan's Elysium allows the gamba to find its own song over a minimalist riff. Haunting. Harriet Cunningham

These Massachusetts rockers have not always had the easiest of career paths, with shifting line-ups and periods of hiatus, and their last album proper, White Silence, being released back in 2011. But nothing prepared them for the blow that 2018 dealt, when songwriter and bassist Caleb Scofield died in a car accident in March.

Not surprisingly, this sixth set is an emotional tribute to Scofield and a determined effort to show the strength of the surviving members. There's no dancing around the loss, either: Final Transmisson opens with the title track that features a haunting voice-recording demo Scofield sent to the band.

The first single, a spaced-out jam called All Illusion, is the album's sole lyrical work from the late bassist, whose wife sourced the words from his journal, and it's fleshed-out brilliantly by a rich arrangement and just the right vocal touch from frontman Stephen Brodsky (who is solid throughout).

Fans of the band knew this was never going to be a totally sombre affair, though, and the bombastic Led to the Wolves, the riff-tastic Winter Window and the spacy sludge standout Lunar Day all show that Cave In still have plenty of fight and sonic ambition in them yet. Bronwyn Thompson