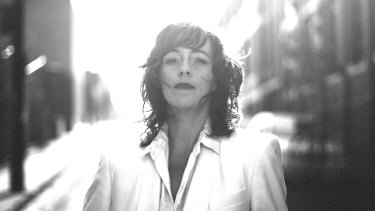 Lucie Thorne's concept album, in a new sonic environment of synthesised beats, electronic keyboards and close-quarters vocals, is a tale – tall, maybe, but definitely true – set in mid-19th century NSW, and told mostly from the perspective of young Kitty Walsh, who runs away with a dapper scoundrel and bushranger, Frank Gardiner. While an unlikely topic for the early 21st-century, it is well within Thorne's wheelhouse as a lyricist with an ear for everyday poetry, and a musician who understands and conveys desire better than most. The way Kitty describes the impact of her first encounters with Gardiner, or Gardiner's voicing of despair in a Darlinghurst prison cell, are natural – sometimes luminous – and evocative. The atmospheres created by Thorne and regular foils, keyboardist Chris Abraham, David Symes on bass and Hamish Stuart on drums, have the feel of growing intensity of emotion; a girding of loins that flourishes in defiance and thrills with release. Thorne's familiar low-key singing is the surprising weakness this time, narrowing melodies and energy, but, if played closely on headphones (making a virtue of the hush), the album's other virtues remain just as potent. BERNARD ZUEL

Do dynamics shape any other musical idiom to the extent that they do tango? It's this ability to swell a melodic line to just the right crescendo, then drop it back to precisely the right softness, that lends tango its almost exaggerated sense of drama. But if these dynamic shifts are too extravagant the music can become melodramatic, and instantly lose its most vital attribute of all: sensuality. Put a piano and bandoneon together, and being on the same page dynamically is pivotal, although not so the two instruments are just primitively swelling and ebbing in tandem. During Astor Piazzolla's Oblivion, here for instance, the piano (Daniel Rojas) plays the shy support, while the bandoneon (Daniel Wallace-Crabbe) kneads the dramatic contours. These two players hear this music with one set of ears; they slice staccato phrases with the same blade, and let legato ones breathe the same breath. I don't recall encountering tango of this quality made in Australia since Jose Luis Betancor's bandoneon wizardry was heard here in the 1990s. And blessedly the sighs of the bandoneon's bellows have not been edited out. They are part of the music's soul. JOHN SHAND

ABOUT US (Future Classic)

It is just over a year since G Flip released her first single, About You, triggering her rapid rise to the ranks of the most exciting new talents in Australian music. Since then the Melbourne-based singer, drummer and producer has kept busy manifesting her dramatic musical flair into a debut album. The record delivers on expectations, showcasing G Flip's powerhouse vocals while also emanating the same electric energy she brings to her onstage performances. Where some singers put on a facade when they sing, G Flip draws from her own personal experiences to sound deeply personal and honest – so much so, that by the end of the album you feel as if you've known her for years. Stupid talks of heartbreak from a toxic relationship that seems to be stuck in a never-ending vicious cycle, while Bring Me Home tells of a time of relentless pressure and the downward spiral of losing control. Kindling the success of the album is G Flip's talent in building pop-gems out of a simple synth riff, bouncy piano chords and incredibly smooth vocals. It's a skill she applies to her singles, I Am Not Afraid, Drink Too Much and Killing My Time, and one she'll no doubt pull off on hits to come. SIMONE ZIAZIARIS

Summer Flake's previous album, Hello Friends (2016), wore its '90s rock influences firmly on its sleeve: Throwing Muses, Belly, Juliana Hatfield and various reverb-happy others. On Seasons Change, however, it feels like Steph Crase (the Adelaide-born, Melbourne-based founder and driving force of Summer Flake) has stepped out from behind the homage to that (admittedly great) genre to create a melodic and mellow type of indie rock that is all her own. Granted, similar terrain to Hello Friends is trodden on In the Dark, with echoes of the Lemonheads, and the softly compelling opener Mind Reader. But there is something less affected and more natural about much of this album. So comfortable does Crase appear to be in her own skin that a couple of tracks – Domino and Heaven Knows – veer toward Whiskeytown or even Cowboy Junkies in their woozy alt-country. The latter song is Crase's song-writing at its elegant best: ambiguous in its melancholy, unhurried in its pacing and restrained in its production. It is one of a number of highpoints on a landmark release from an unassuming and modest – but important – Australian musician. BARNABY SMITH

Chicago-based outfit Whitney wrote their first song in 10 minutes. It's the kind of trivia designed to wow music fans, but it's also a testament to the band's effortlessness. Their 2016 debut was celebrated for distilling the feeling of summer, and their sophomore effort continues this hazy meditation on feeling lost, in love and joyfully alone. Founding members Max Kakacek and Julien Ehrlich formed Whitney following the dissolution of their successful projects Unknown Mortal Orchestra and Smith Westerns. But rather than revisiting these projects they lean into Whitney's point of difference and the sun-kissed nimbleness of Ehrlich's voice. Song for Ty gently pleads for more time, while My Life Alone revels in solitude, but it's the title track that encapsulates the album's overwhelming melancholy. "The highs keep falling back down/But it gets no better thinking about," Ehrlich muses longingly. The effervescent strings, piano, and guitar almost distract from the deep sense of loss (Giving Up), hopelessness (Before I Give Up), and woe (Friend of Mine). By the end, the existential dread is almost overwhelming, if not addictive; sonically warming the soul while breaking listeners' hearts. KISH LAL

BEYOND THE DOOR (Merge)

The McDonald brothers formed a band as LA school kids in 1980. They're now in their 50s, but at heart they are still those teenagers in the garage for the first time, plugging guitars into amps, and discovering that if you turn it up, it like totally blows your mind, dude. Their seventh album opens with a cover of the Henry Mancini-penned theme from Peter Sellers' 1968 film The Party – the original done in the style of the Fifth Dimension, with electric sitar and sax solo. The band keeps the twang and harmonies, but recasts it as hip-shaking lava-lamp rock. They've always been musical and pop-cultural magpies, happy to worship at the altars of everything from metal to cheesy pop. So Fighting is a glam-booted stomp, finding common ground between the Ramones and the Sweet, with lines about K-pop girls singing Captain Beefheart songs. Their ear for candy fails them on The Party Underground, which smacks of Smash Mouth, and sounds like an audition for the next Shrek movie. Fun is hard to manufacture, and although the cracks show here and there, these grown-up kids are still trying to find the treasure in the trash. BARRY DIVOLA