Growing up on the northern beaches, choral conductor Sam Allchurch was, he insists, “pathetically nerdy”.

“I was about the only kid in Manly not running around with a surfboard,” he says. “Instead, I was organising carol services and stuff like that.” 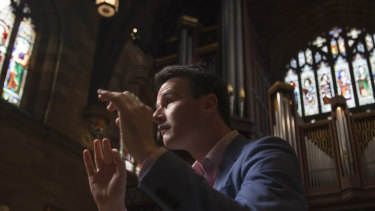 Sam Allchurch steps into the big shoes of the late Richard Gill as music director of the Sydney Chamber Choir on Saturday.Credit:Wolter Peeters

But all those years forgoing the delights of catching a wave have evidently paid off. Now 28, Allchurch has stepped into the big shoes of the late Richard Gill as music director of the Sydney Chamber Choir, with whom he debuts on Saturday.

Allchurch was just 10 when he successfully auditioned for the national children’s choir, Gondwana Voices, directed by Lyn Williams.

It was a “lightbulb moment”.

“The sound was something I had never heard before,” he says. “It was so glorious. The whole was so much greater than the sum of the parts.”

“I had a nice pleasant little voice but with which I could never have done anything on my own. But in a choir I could finally do something with it.”

Williams sparked in him an ambition to become a choral conductor. Aged just 13 he took control of his local church choir in a “bloodless coup”. There he learned a lot – and not just about music.

“The musical side was one thing but it was all the other conducting stuff that began to open up – the decision-making. Do I go back and fix that or do I let that go? How do I say that was awful in a nice way or even not in a nice way? It’s psychology as much as it is music.”

Eventually he went to Melbourne to study organ (which he says he neglected because he was so busy corralling his colleagues into choirs), and then went to Cambridge to complete a post-graduate degree in conducting.

Now he is arguably one of the busiest conductors in Sydney. On top of his Sydney Chamber Choir duties he is also director of music at Christ Church St Lawrence and Associate Artistic Director at Gondwana Choirs, working alongside his old mentor Lyn Williams.

Each ensemble demands its own approach, rather like playing three separate “instruments”.

“Each choir is different,” says Allchurch. “How do you play that instrument? Which buttons do you press? Sometimes I get that wrong. Just the mechanics of ‘Oh, I can’t talk to them like that I have to talk to them in a different way'.”

Saturday’s concert, A Royal Affair, features, among others, works by the Australian-born former Master of the Queen’s Music, Malcolm Williamson.

However, despite – or perhaps because of – that high-profile appointment, Williamson’s work remains relatively overlooked in Australia.

“His music is good music and is interesting music,” says Allchurch. “I was prepared for people to say this is a museum piece. But I don’t think that is true. It is beautiful music.”

Allchurch is focused on forging his own path with the chamber choir but naturally the shadow of the much-loved Gill is never far away.

“He was the most incredible motivator and had very specific ideas about things,” Allchurch says. “I feel sometimes in his footsteps quite nervous.

“He would make a decision about the musical style and absolutely stick to it. I’m not as good at that – or maybe I need another 40 years to have that!”

A Royal Affair, June 1, Great Hall of the University of Sydney