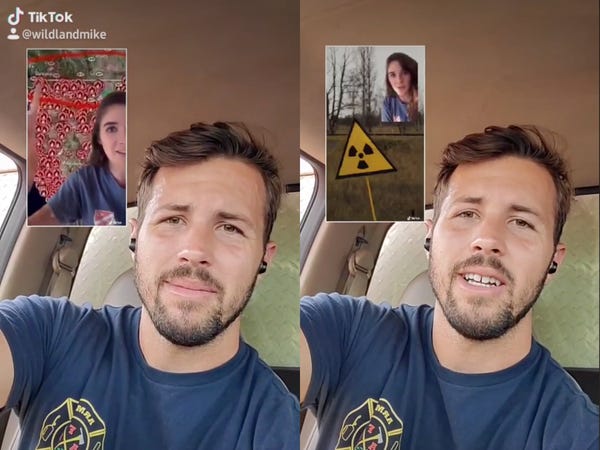 A video that seemingly shows a firefighter debunking conspiracy theories related to the West Coast fires is going viral on TikTok and Twitter.

@wildlandmike, who has approximately 12,000 followers on TikTok, posted a video on Tikok in which he point-by-point refutes another video that floats a number of theories about the fires currently raging on the West Coast.

The original video that @wildlandmike is responding to was posted by TikTok user @cierra_mistt, who has approximatley 2.6 million followers on the app. @cierra_mistt confirmed to Insider that the video was hers and provided a screenshot showing that it had been removed by TikTok for a Community Guideline violation. She said that she posted it saying that she wanted someone to debunk the theories for her.

"There are a lot of fires going on right now in our country," @cierra_mistt says early in the video.

"But was it planned?" the woman says.

Original duet got taken down… ##wildfire##califire##conspiracy

There are currently more than 85 fires affecting areas on the West Coast, ranging from Northern Washington to Southern California, that have killed at least 35 people. The California August Complex Fire is now the biggest fire in California state history, burning over 755,600 acres. Smoke from the fires is turning skies orange on the West Coast, and reaching across the continent and even as far as the Netherlands.

Throughout the video, @wildlandmike addresses other claims, such as fires stopping at the US/Canada border — "That's a US database map you're looking at, not gonna be reporting Canada fires," @wildlandmike says.

In one part of the video, @cierra_mistt claims that there are "bio-hazard signs all over the place" in a location "about 40 minutes from Grand Canyon National Park."

"That's literally not there," @wildlandmike says. "I've worked there, it even looks edited. Come on, guys."

In the caption of the video, @wildlandmike says that the original duet was taken down. This version, presumably a re-upload, has amassed approximately 211,000 likes and over 900,000 views since it was posted a day ago, and spread to other social media platforms as well.

On Twitter, a repost of @wildlandmike's video from @crez_guez has amassed over 4 million views. People have been plenty forthcoming with praise for the video itself; others also commented on @wildlandmike's appearance.

"every day we should have a different hot firefighter calling out a conspiracy theory, I'll leave the logistics to you all I'm just the idea man," @nicsigni wrote in a tweet.

In the time since the original video went viral, @wildlandmike has already debunked another conspiracy theory video about the wildfires.  He did not immediately respond to Insider's request for comment.

'NCIS' Season 18: Fans Will Learn More About Torres' Past, But Will His Future Include a Romance With Bishop?

Dan Walker comes under fire by Alex Scott for ‘cheeky’ throwback ‘This a history lesson?’